Long lines in the Auditorium on Tuesday afternoon, where students, employees and other interested individuals are waiting for the lecture to be given by Nobel Prize winner Ben Feringa. As part of its tenth birthday celebrations, the Institute for Complex Molecular Systems (ICMS) invited ‘the man behind the nanocar’ to treat an audience to an afternoon full of the ‘Joy of Discovery’.

Departing scientific director of the ICMS  Bert Meijer and Nobel Prize winner Ben Feringa have known each other since their university days. Having studied for their doctorates together, they have kept in touch. “An institute celebrating its birthday deserves a great present. What could be more inspiring for a university than a lecture by a Nobel Prize winner on the best topic you could hope to work on: nanomotors?”

And so efforts to bring good friend Ben Feringa to Eindhoven were successful – “finally”, sighs Meijer with a wink – despite his full diary. This is followed by black and white photos of both men’s good old student days and jokes about Feringa’s skating medal for completing the Eleven Cities Tour – more highly prized by a northerner than any other distinction.

“It is good to be here in Eindhoven, certainly on account of the tenth anniversary of an institute that is well renowned both nationally and internationally,” Feringa acknowledges. In 2016 the professor from Groningen won the Nobel Prize for Chemistry for research into molecular nanomachines, and he was the first person in the world to succeed in synthesizing a light-driven molecular motor.

During his lecture entitled ‘The Joy of Discovery’, co-organized by Studium Generale, Feringa leads the audience into the fascinating world of complex, dynamic molecules and their scope for application. After all, the mobile molecular ‘minibots’ – he shows wonderful animations of tumbling spheres and microscopic images of minuscule tangled masses moving animatedly – will have a wide range of applications in the not too distant future, the chemist assures his audience enthusiastically. From self-repairing car paint, enabling a scratch in paintwork to melt away, to antibiotics that target precisely the site of the infection in the fight against antibiotic resistance.

But, above all, he shows the students listening that a world of discovery awaits them. “Follow your dreams, don’t give up too easily, and let yourself be seduced by the questions that make science so fascinating. Because it is not the answers, but the ever-changing questions that lead to groundbreaking research,” Feringa shares with his audience.

He emphasizes that the future is in the hands of the next class of engineers. “We can’t predict the future, but you can change the future and determine what our society will soon be like.” The need to encourage new talent that this involves highlights the importance of the existence of an institute like the ICMS, says Feringa in closing. Jan van Hest, the newly appointed scientific director of the ICMS, nods in agreement. 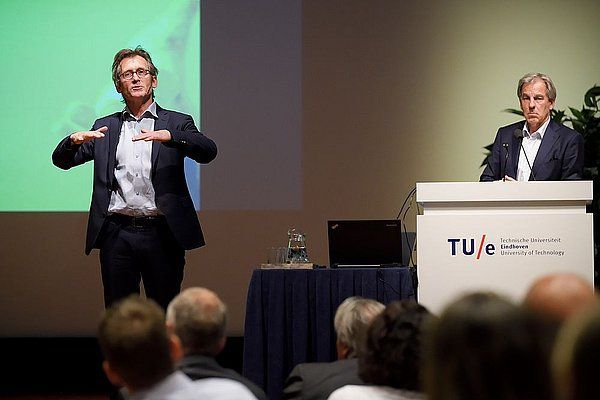 'I hear too often that women have to be harder, more…
Move to live: how Move to Be wants to get the country…
ParkinsonNet takes the lead in eHealth
The healing qualities of a lightning bolt
Living in your own sustainable social housing
MachyTech enables humans and robots to work safely together
Manage Cookie Consent
We use cookies to optimize our website and our service. Help us to make our site better by accepting all cookies.
Manage options Manage services Manage vendors Read more about these purposes
View preferences
{title} {title} {title}