Viruses are the building blocks of life. They have made human evolution possible. But they can also make us ill. “When viruses make people ill, in most cases, they are themselves to blame. Because they have upset their balance,” virologist Karin Moelling states.

Moelling is a renowned, internationally acclaimed virologist. She has made significant contributions to AIDs and cancer research in particular and has received many accolades for her life’s work. To this day, she remains fascinated by her research subject.

There are more viruses than stars in the sky. There is no species in this whole world that does not have viruses. They are everywhere. In every living thing, in the air, in the earth, in the sea.

Moelling explains in her book, ‘Supermacht des Lebens. Reisen in die erstaunliche Welt der Viren‘ (The Superpower of Life. Journeys into the amazing world of viruses), Moelling explains how important viruses are and that they shouldn’t frighten us – just like the current coronaviruses.

Viruses constitute the largest biological population. It is common knowledge that they are spread all over the globe, that they colonize oceans, flora, fauna and also humans. But viruses are much closer to us than we have long suspected. In 2001, the science journal Nature published an eagerly awaited piece of research: the human genome had been successfully decoded! And what was found, to everyone’s surprise? Viruses! The human genome is composed of viruses, former viruses, and virus-like elements for at least 50%. This is just an estimate, it could be much more, says Karin Moelling.

And that not only affects us humans. The DNA of all living beings on this planet is composed of varying proportions of DNA stemming from viruses. How is that possible? Are viruses our ancestors? That viruses were the first living beings, the origin of life – is so far still just a hypothesis. A hypothesis that Dr. Moelling firmly supports. She’s not alone in this. There are other scientists who are convinced that bacteria were the first living things. Although many others deny that viruses are actual living organisms since they cannot reproduce by themselves. They need a host cell for this purpose. At least this is true for the viruses that are found today. Billions of years ago this might well have been a different story. 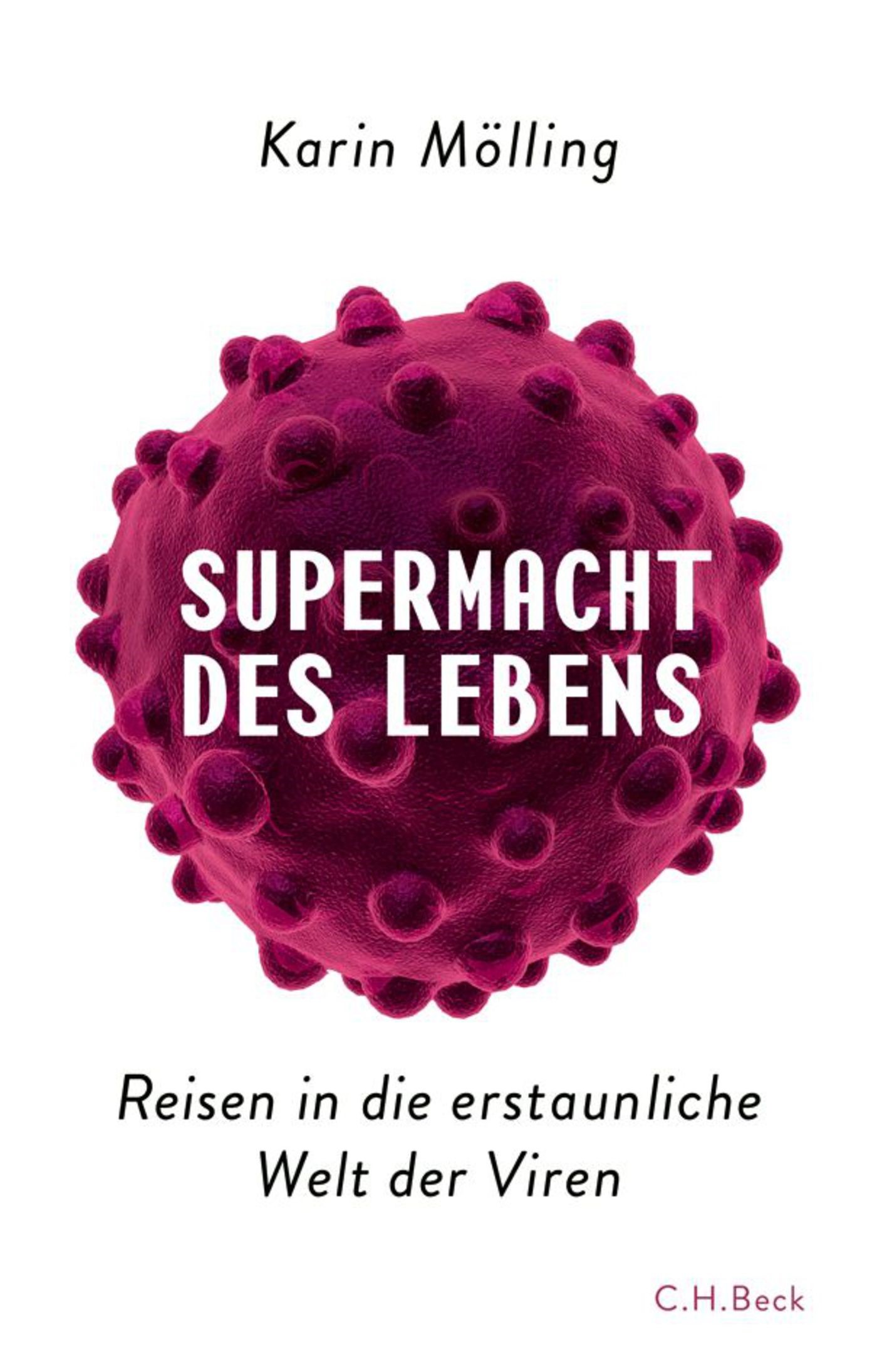 The relationship between a virus and a host cell can vary greatly, anywhere from the total destruction of a cell to their peaceful coexistence that benefits them both. Viruses can remain inactive in a cell. They then reproduce themselves through the natural division of the host cell. They do not damage the host in the process. However, they are also able to integrate their own DNA into that of their host.

If they do manage to integrate their DNA into the nucleus cells of their host, they will be passed on from generation to generation. Certain mechanisms may reactivate the viruses and cause them to reproduce in these cells. Or, once encoded in the host’s DNA, they remain in the genome for all future generations. This process is known as endogenization. It is probably responsible for the fact that our DNA and the DNA of all living organisms contain a large proportion of viral DNA.

We are made out of viruses. But that should not frighten us. On the contrary. The constant changes that viruses have caused and continue to cause in our genetic make-up are part of our evolutionary history, our genesis. Karin Moelling states: “Viruses are the engine of evolution.”

There are two striking examples of what we have learned from viruses. The first concerns our immune system. When viruses have infected a cell, they prefer not to have any competition there. Not even from their own species. They defend their host cell against other invaders, do not let them in, or destroy them. This protects us from more pathogens. When they are endogenized, i.e. have encoded themselves into our genome, this mechanism becomes part of our immune system. Viruses defend us. Against other viruses, but also against bacteria. In all likelihood, all known immune systems were engineered by viruses.

A second aspect concerns human reproduction. Viruses have not only created our immune system, but there are also viruses – not unlike HIV viruses – which have the ability to partially undermine our immune system and consequently weaken our defense against foreign bodies. This is why we don’t have to lay eggs or carry our offspring in a kind of kangaroo pouch. Owing to this resultant immune tolerance, the embryo is not rejected by the mother’s body and is able to continue to develop until birth.

Necessity is the mother of invention

What did the evolutionary developmental contribution of viruses look like? Evolution does not necessarily mean more advanced development or an increase in complexity. It can also turn in the opposite direction: from complex to simple. If you give certain viruses ideal living conditions, they simplify themselves to the essentials of life. As in, the ability to reproduce.

This is also a principle of life. But we humans have never had ideal living conditions. On the contrary, we have constantly had to face countless challenges and adapt to environmental conditions in order to survive as a species. Viruses have made this all possible by constantly causing changes to our DNA, which ultimately leads to new coping strategies. The tens of thousands of years of history of the union between humans and viruses are inscribed in our genes.

A viral disease is a great innovative stimulus for the genome, whereby a set of genes is added to the existing genome in one go. That brings with it new opportunities. Especially considering that viruses are the greatest inventors.

Good viruses? Bad viruses? Well, neither. On the one hand, viruses are the engine of our evolution. On the other, infectious diseases, both bacterial and viral, are among the leading causes of death worldwide. But the fact that a virus becomes harmful to its host is usually due to a disrupted natural balance in biology. One example of this is the oceans. A lot of algae contain viruses. If they reproduce too much, the viruses in them are activated. They begin to dissolve the algae and thereby end up causing algae infestations. Substances released by the algae provide nutrients for other microorganisms. “These viruses control the population dynamics of algae. Algae and viruses have been interacting for billions of years.”

There are innumerable types of viruses in humans that make up our microbiome, our entire set of natural microorganisms. But there are also pathogenic, i.e. potentially disease-causing viruses in us, without us even noticing it. They only become active under certain conditions. A well-known example is the herpes virus, which plenty of people carry in their bodies. It only becomes active in stressful situations and manifests itself with its unpleasant appearance in the form of blisters on the lips. We not only fall ill through infection, but also when we become overworked, are undercooled, or are out of balance.

Karin Moelling is a tireless researcher who is completely absorbed in her field. After many other professional positions, she was appointed Professor of Virology and Director of the Institute of Medical Virology at the University of Zurich in 1993. She retired in 2008. But she continues to work “all day and without interruption,” as she says.

Her new research focus is on multi-resistant bacteria. They are a highly dangerous problem, especially at our hospitals. Every year, up to 20,000 people die in Germany from infections caused by multi-resistant bacteria. This is caused by the frequent and unnecessary use of antibiotics. But antibiotics in animal feed and lack of hygiene in hospitals are also part of the problem. However, there are natural remedies that can be used to fight bacteria that cause illness. And these are viruses!

Bacteria are also attacked by viruses, which are referred to as bacteriophages. The discovery of bacteriophages dates back to 1917. A few years later, penicillin came into widespread use and surpassed them in the fight against bacterial diseases. Now, however, the bacteriophages could potentially be life-saving. In cooperation with an international research group, Karin Moelling is currently developing an effective therapy for these. And her new book on this subject is almost finished.

Dr. Moelling doesn’t want to speculate about the probable causes of the increase of epidemics in our time. Whether one can actually speak of an increase is not yet clear in her opinion. But she does point out that viruses find ideal conditions to spread in densely populated cities and where there is an enormous amount of movement. The distances from virus to host are extremely short. Consequently, our countermeasures include cutting off their routes by means of social isolation.

Environmental factors such as air pollution could be an additional factor in the “success” of coronaviruses. However, we will not and cannot depopulate our cities. Globalization and mobility are also not easily reversed. Other solutions must be found. People have to come up with something new. Throughout evolution, life has proven to be extremely resilient. Although, never before has anything been as destructive as humankind itself.

This article is based on an interview conducted in April of this year and Karin Moelling’s book ‘Supermacht des Lebens. Reisen in die erstaunliche Welt der Viren‘ was published in 2015 by C.H.Beck Verlag.