A definition of the word nerd: someone who, in the eyes of others, has boring hobbies and doesn’t fit into everyday surroundings. An old-fashioned view, perhaps. In any case, that does not matter to the public at the Night of the Nerds in the Klokgebouw during Dutch Technology Week. Or like Maurice Schmitz, one of the partners behind the initiative, says: “Young people live in the future. Things like virtual reality are not necessarily new for them and they know the potential of technology that they experience daily. They are surrounded by technology throughout the day.” During the Night of the Nerds, the ‘nerds’ will then be in their natural habitat when the Klokgebouw becomes filled with game developers, small tech start-ups, and representatives from large companies.

“How do you grab the attention of a generation that is so surrounded by technology that they’re hardly aware of its presence.’Maurice Schmitz, Initiator

Off the beaten track
The evening revolves around the interest in technology, on all sides. One the one hand, a group of 14- to 19-year-olds should become enthusiastic about the potential and importance of technology. On the other hand, the business world needs to have the opportunity to showcase themselves as a good career choice for the visitor to the Night. And that poses a challenge: “Because how do you grab the attention of a generation that is so surrounded by technology that they’re hardly aware of its presence”, says Schmitz. “We do that by doing something weird with technology. Because those who get off the beaten track, stand out and become interesting. Then students will suddenly ask a lot of interesting questions.” 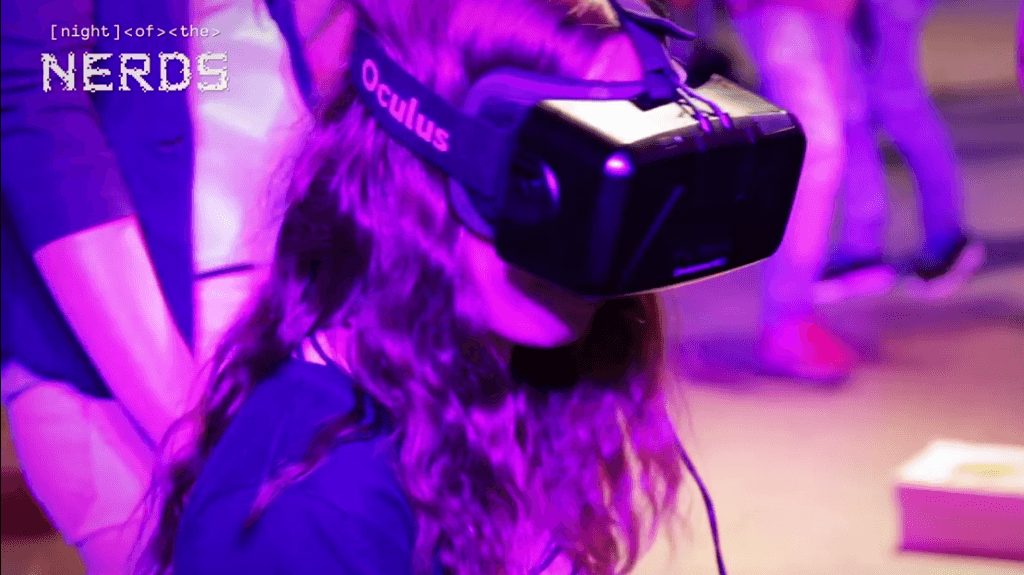 Night of the Nerds 2016
StichtingFutureBites
Learning resources
“The best feedback we receive is that a visitor says to his or her teacher: ‘What I did there, that is what I also want to create.’ Then we have achieved something, and so we make a step towards a world where technology has a more prominent role in education.” Visitors to previous editions could, for example, work with the robot of Fontys Team Rembrandts, they saw a drone from Team Stella from the TU/e, and they got to try out the VR glove by Manus VR. Schmitz’s personal favorite this year is Raspberry Pi. Visitors can link the programmable robot to sound, so they can get experience with programming through playing. This is already a huge success in England and we want to bring it here now. We also have the ambition to later offer this as a learning resource for schools. This makes the technology interesting in a playful, unexpected way. In this way, we also want to encourage our visitors to think broadly for themselves.”

Experimentation
And so, the old-fashioned definition of nerd still suits its object. But it is no longer a bad moniker. The nerd is needed, says Maurice Schmitz. “When we talk with the business community, we discover that there lies the power of the Dutch. We are skillful, but we also have the confidence to experiment. And experimenting leads to innovation. We need to have a big share of that in that in the Netherlands.”