When making the appointment for the interview, Minsung suggests meeting during Dutch Design Week at the Huiskamer. “Then you can see what our work is all about,” he emails. The Huiskamer is a meeting place for refugees. They can make contact and develop talents. The place is during DDW the location of Vreemdland, an expo organized by Bron van Doen, the studio of Minsung. “We are dedicated to socially engaged projects.”

“I studied art history and archaeology in South Korea. And I had interest in design and then mostly conceptual design. I very quickly I learned about Dutch design and if you get to know Dutch design, very quickly you will get to know the Design Academy Eindhoven, and that was the main reason I came here. I came here with a vague expectation of what Dutch design is, I retrospect I was very clueless, also on what it means to be a designer in Europe. It was a tough learning experience because it was so different from what I expected. My study was called Man & Leisure and from a South Korean perspective that makes no sense at all. We do not call a serious high level eduction Man & Leisure. In the field, I call myself a co-designer or a social designer. That are also names I didn’t know they existed. I didn’t know there was such a thing as social design.”

“I have to keep renewing my residence permit, that is not easy as an independent designer”Minsung Wang, Social designer

“During my study, I learned about co-creation and what it means to society to be a social designer. When I graduated in 2014, that became my focus. Together with Ron and Conor, I started our company Bron van Doen. Here a lot of students create their own start-up or studio. That was so puzzling to me. It was like no one was getting a job while this is a great school. I didn’t understand. But I learned that the Dutch students mostly are very keen on to do whatever they want to do. That was super inspiring for me.”

Staying in the Netherlands after graduating is quite a struggle for Minsung. “I don’t complain, but it is the reality. Being here is a challenge, on one side because of the work we do, on the other side on a personal level. I have to keep renewing my residence permit, that is not easy as an independent designer. I have to prove that I’m worth to have a permit and to work here, it is my responsibility. If I have an employer, they would have to show what my added value is. Now I have to do that myself. I have to prove to the IND that the work I do is valuable to the Dutch economy. So that is a constant struggle.” 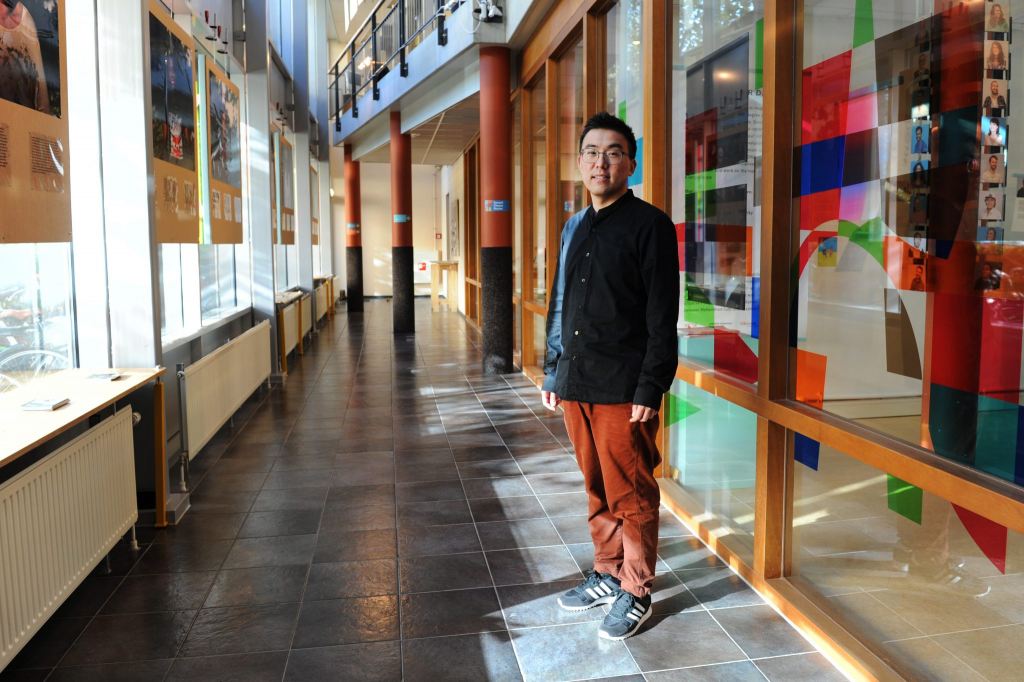 “Non-European graduates need to realize what it takes if they want to start their own business here. School isn’t here to help non-EU students to set up their businesses here, but in general, the education encourages entrepreneurship. Al these small-scale creative businesses fit like a glove with the Dutch economy, but this wouldn’t work in Korea, Japan or South America. But it doesn’t exist in the neighboring countries either, I have so many French and German colleagues and they stay here. Why don’t the go home? For the same reason as me: the way the economy here is and the creative industry respects small-scale practices and that allows diversity. When you start a company, the first two or three years you need to focus on your business, and not be distracted by all the things you need to do for your permit. If you can’t handle that struggle, use the year you can stay here after your study to have success, be as active as you can be. And go back to your own country, coming home as a winner.”

“With Bron van Doen we did projects with elderly people, children and now refugees. We work together with the social domain of the city of Eindhoven. One of the reasons I’m happy to be here is that the municipality is thinking along with us. For a municipality willing to listen, that is an amazing experience. We also worked with Vitalis Woonzorg, with our first expo in an elderly home. At first, the residents were scared, what was going on?  They were terrified and curious at the same time. The project Nieuw/Oud became a success. With the Van Abbemuseum, we have the Agents of Change project. Housing corporation Woonbedrijf is one of our partners. They do a lot with social design in their neighborhoods. We are not about solving problems but addressing the problems together. It’s not like all of a sudden all problems are solved. We don’t have the illusion we do that. We try to make a difference, working together with the right partners.”