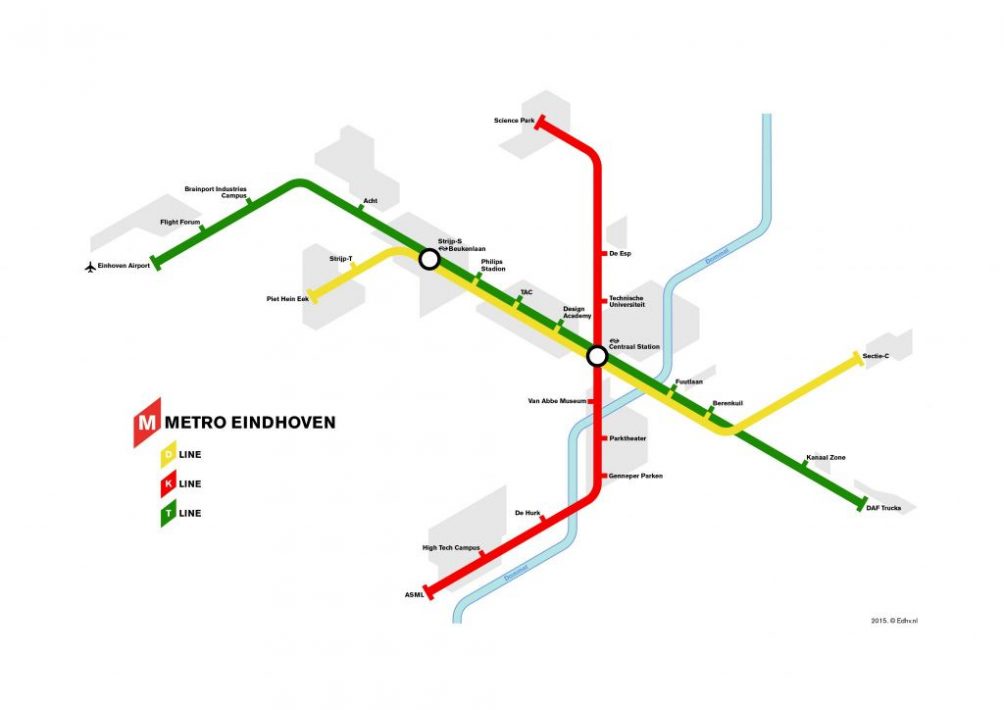 Talking about having an ambition… building a metro network under Eindhoven. And if you’re convinced that something like this would offer a multitude of benefits and you’re a designer, well, then you’d better start drawing. Here’s how a detailed version of Eindhoven’s metro map might look, complete with a D-line that serves the designer hotspots, a K-line for all the knowledge areas and a T-line that connects the tech-initiatives.

It didn’t start out as a joke, although Remco van de Craats, the brains behind the idea, realises that it won’t just appear out of thin air. There are a few different thoughts behind the metro project. Most importantly, and in contrast to the current, partial solutions, a metro would really make double the connections between all the elements of the city. Double because the underground network easily connects places and because, as a result, the large transport links, such as the four-lane roads, could disappear.

Van de Craats is the owner of the multidisciplinary design studio EDHV, which is housed in one of the hangars on Fuutlaan. Employees at EDHV call themselves “architects of identity” on account of the various ways, and without any one kind of expertise, that they serve their clients. One client for whom EDHV has helped design a new identity is the City of Eindhoven. Web-design, brand development, photography, small and large graphics, there are examples of everything in the EDHV hangar on Fuutlaan. Designers work in open caravan-style offices, brainstormed ideas hang on the walls of the corridor where the statuses of all current projects are tracked. “A designer only improves if he comes out from behind his screen and starts an open dialogue about his project.”

Van de Craats is convinced that a metro network can bring together all of Eindhoven’s different cultural centres. “Eindhoven is literally split up at the moment. Kennedylaan splits Woensel, the railway track separates north and south, the campuses are literally closed areas. The results of this are visible in the broken communication between, for example, the tech, design and knowledge workers. Just imagine how it would be if we could find each another!”

The proof that this is more than just vague ideas is easy to find according to Van de Craats: “Just look at the cities that now have metros. It’s a world of difference between the time before and the time after their construction.” He takes Boston as an example. “Because the city centre with all its legal and financial specialists is connected under the ground to the tech and knowledge institutes of MIT, Cambridge and Harvard, there are businesses there that wouldn’t otherwise exist.” But it’s not just about connections – the local economy would also be strengthened. “Literally everywhere in the areas around a metro station there are new activities happening above ground. Places to eat, grocery shops, all sorts.”

Originally from St. Oedenrode, Van de Craats stayed in Eindhoven after he completed his studies at the Design Academy. “Unlike my course mates, almost all of whom saw more opportunities in Amsterdam and Rotterdam. I don’t have any regrets because a lot of great things have happened in this city since then. The ambition in the fields of technology, knowledge and design is huge. But it could be even better.”

The city of Eindhoven could still tick every box, especially in transport and with the opportunities for connections, according to the EDHV owner. “Take for example the HOV-line, Hoogwaardig Openbaar Vervoer [Ed. note: High-Quality Public Transport]. But it’s actually nothing more than an intermediate solution. Look at Aalsterweg: a considerable part of it is now used as a bus lane and, as a result, a bus drives down it once every fifteen minutes and the rest of the time the cars next to it are stuck in cramped spaces.”

A metro has the benefit of a double connection, says Van de Craats. Underground you have the sensation that you get on somewhere and, without knowing exactly what happens in between, you get out somewhere else. It’s quick, unnoticeable, as if place A is directly next to place B. Beam me up, Scotty! And, above the ground, you can then separate areas tied together with parking, homes or bike paths. Just imagine what kind of effect that is!”

And there’s one more thorn in the designer’s side: the campuses. “TU/e is dead at night, even the High Tech Campus closes. It’s ridiculous, as if you have to lock up your knowledge in impenetrable strongholds. That’s not going to get us anywhere, is it?”

Encouraging connection could well be even more important for the Netherlands than for a city like Boston, says Van de Craats. “The Dutch culture is more closed by nature, maybe it’s because of our Calvinism, here too. Whenever I went to a coffee bar in the US, I’d always end up having a conversation. Not here through. There isn’t much of an informal infrastructure here.”

This is exactly why Eindhoven needs a big boost. And yes, that costs money. A lot of money. “That’s right, but it’s not as if this hasn’t ever been done anywhere else before. Yes, it requires money, but more than anything it requires vision. Why can’t we think of something great together with the industry that has been created here, with the tech and knowledge institutes? Shouldn’t a company like VDL be able to come up with a clean transportation system that runs on solar power, for example?”

Of course it’s nothing more than an idea at the moment. “But these aren’t idle thoughts. The stations, for instance, they’re not just there like that. The connection of all knowledge, tech and design spots has been made clear with the stations in between. Just look at the names. But it’s all open to improvement. When I tweeted my map, for example, I got an immediate response from an Amsterdam councillor, who rightly said that it didn’t make sense to build two lines with so much overlap. He’d learned that from the builders of the metro in Lille. Isn’t it great that people respond so constructively? Our idea obviously appeals to the imagination, who knows what will come of it.” 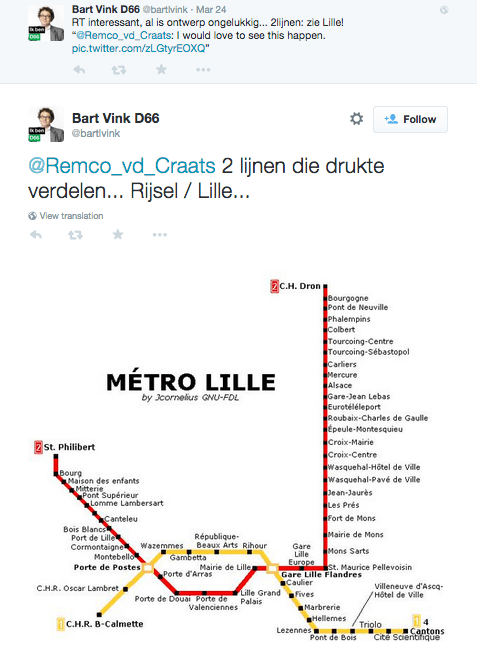 You shouldn't just ask for a grower, but just give Bart a…
Academic heart, commercial head
Working digitally is disastrous for innovation
Priorities in High-Tech and Semicon: a Dutch regional…
Dortmund: where innovation drives community spirit
What is the ‘box’ when it comes to thinking 'outside the…