When we meet Karisa at Coffeelab, one of her favourite places in the city, she has just returned from six months in Sweden for her work. She is in her second and also last year of her PDEng, the more practical form of a PhD trajectory. “I realised I missed Eindhoven a lot, when I was in Sweden,” Karisa starts her story, “Eindhoven is such an energetic city. I like to do a lot of different things, like singing and performing, and here I can do that. In Sweden, I lived in Borås and I had to go to Göteborg for different activities. Here in Eindhoven, I have everything within reach.”

“Before I came to Eindhoven, I studied Applied Mathematics in Enschede for two years. I got the opportunity to continue my academic career in Eindhoven and seized it. Before I came to the Netherlands, my bachelor mentor in Indonesia recommends Eindhoven already. And during my time in Enschede I met up in Eindhoven with people I knew from the orchestra I played in in Indonesia and we played here. So when I could start at the TU/e, everything fell into place. This was the right direction for me. It felt good. Still the first few months were hard for me. I had to start from scratch again. I was worried about making new friends, but in hindsight, it wasn’t necessary at all to have those worries. There are a lot of great initiatives you can visit to build a social life in this city.”

“In the beginning, I visited the Hub for expats a lot to meet fellow expats”Karisa Widyadari, PDEng Industrial Engineering

“In the beginning, I visited the Hub for expats a lot to meet fellow expats. The Hub provides a lot of clubs so there is always something you like. I made a lot of friends of all kinds of nationalities. During my first year I was wondering where I would be assigned for my six months project during my PDEng. The opportunity in Sweden came along, I took it, but also that feeling of starting up again was there. I feel at home in the Netherlands, also because of the large Indonesian community and all my international friends. In the company for my project in Sweden, there weren’t a lot of international colleagues. I started appreciating Eindhoven more and more. Now I would love to stay in Eindhoven after I finish my PDEng.” 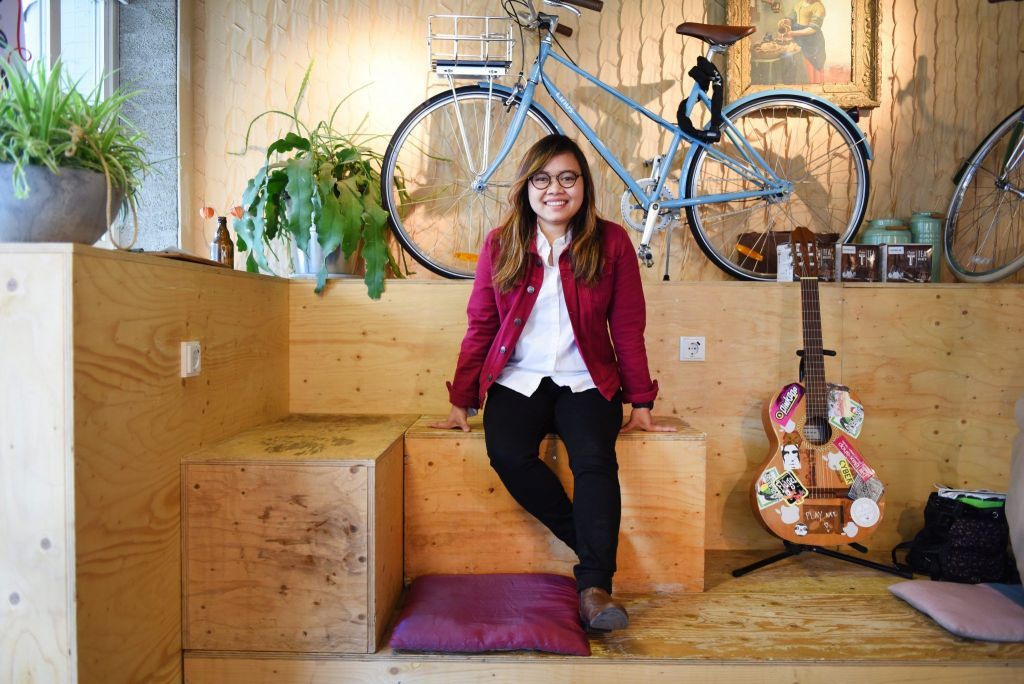 Karisa wants to use this article to show her family and friends what her life is like in Eindhoven. “A lot of people know the university and the technology companies, but there is more to this city. I am so excited about living in this vibrant city. When I guided some friends around I really felt like a local. International students are often in a parallel bubble, only focused on their study. But studying abroad should also do something for you: like, learning more about yourself by getting to know other cultures. I could have taken the comfortable route to only mingle with other Indonesian people, but what’s the point of studying abroad then?”

Do you see also aspects that can be improved? “Eindhoven is a very productive city, but I think people sometimes need to take a step back and feel the moment. The mentality here is not to whine, but to go on and work hard. But I notice people don’t take the time to make contact with people besides work. They are nice but often keep their distance. In Indonesia, they are close to people in their environment. A nice example is the study group I used to be in with two Dutch students. After a few months, I still didn’t feel comfortable. The contact stayed on the surface. I didn’t want to be too forward and scare them off. But after I became more open, they opened up to me too. I guess they just were careful with me. We are still friends and I was very proud to show them around in Eindhoven.”