Until 2030, there is a need for a million new homes in the Netherlands. That is a lot, and it immediately raises the question of where all those houses will be built. Many people prefer to live in the city. But then the logical next question is whether that is possible. The city has its borders full of buildings, and transforming existing built-up areas is complex. There are certainly opportunities there too. I have been living in Eindhoven for more than 20 years and know this city well. In Eindhoven, a lot is happening and what is particularly striking is that areas where people previously could not and did not want to come, are now hip & happening. Hence: time for an inspiring round of Brainport Eindhoven.

This article appeared earlier on the LinkedIn profile of the author, Tom ter Bekke. View the original here (Dutch).

Let me just start with the reason for this blog post: as an Eindhovenaar, artist I am impressed by what is happening in this city. The municipality and developers present ambitious plans for locations within the ring road one after the other. Often area developments with high-rise buildings, whether or not in combination with a redevelopment of existing real estate or even transformation of (monumental) buildings.

Not bad for a city that arose less than one hundred years ago from a merger of the original municipality of Eindhoven and the surrounding municipalities of Strijp, Woensel, Gestel, Tongelre, and Stratum.

With this need for a million homes in the years to come, we all want to ensure that the opportunities in the city are optimally utilised. As an Eindhovenaar, I see that ‘my’ city is well on its way in this respect. Opportunities are being seen and cashed in, which did not seem possible before.

Soon fully part of the city

I myself have been involved in the development of Strijp-S for a long time, perhaps the best-known example of an area transformation in this region. For a long time this area was a kind of ‘forbidden city’. Nobody had thought in that period that people would live here later.

Meanwhile ‘the neighbours’ Strijp-T and R are also in full development. But much more happens. Take, for example, the former Campina factory on the Eindhoven Kanaal. Area developer BPD is realising a new urban area that will be called the Dairy Factory. The historic factory buildings form the heart of the new district. In this sustainable part of the city, living, working, and recreation will soon be coming together. Soon this area will be an integral part of the city, I dare to predict.

Much is also happening in other parts of the Channel Zone, for example on the Picuster terrain and the NRE terrain. And then there are also the plans of Amvest for the station square District E, where several towers will be erected.

Developers Foolen and Reijs are at the basis of an important part of the transformation from office buildings to residential homes in the centre of the city. For example, in the Emmasingel quadrant or at the former premises of the Technical Service of the municipality of Eindhoven.

By bike, on foot or in the car: I pass by every day and I see the city transform itself before my very eyes.

The development that has taken place on the TU/e campus in recent years is also interesting. The campus is increasingly becoming an open, lively environment where students, researchers, and entrepreneurs are welcome. An inspiring place to study, work, live, network and relax.

In this ‘technological hot spot’, located in a park-like environment close to the centre of Eindhoven, students, employees and scientists from all kinds of disciplines at home and abroad can meet and work together. In addition to catering, sports and cultural facilities, there are houses being built and there is even a supermarket. This was unthinkable in my student days at this technical university.

I am sure that there are many more opportunities in this area. Just as it is clear to me that there will be many more transformations in the years to come on spots that we could not have imagined before.

What makes Eindhoven the example it is at the moment? I think there are three main reasons for this.

This is a clear point on the horizon and the municipality also lays down clear conditions. Eindhoven wants to urbanise, but the urban character is not synonymous with (only) high-rise buildings for the municipality. The municipality also specifically mentions that, among other things, the transformation of vacant real estate is preferable to new construction and that priority should be given to the sustainability of existing stock.

2. One of the fastest growing regions

Secondly, ‘Brainport Eindhoven’ is one of the fastest growing and most innovative regions in the world and economically one of the three core areas of the Netherlands. It is an innovative, world-class, state-of-the-art technology region that competes with top technology regions such as Helsinki, Zurich, and Vancouver. Eindhoven is in demand and that gives confidence to developers. That’s why they invest in this city. No wonder the city is mentioned several times in the new national coalition agreement.

Thirdly, it is possible in Eindhoven. You can not build around the city centre in all inner cities, but Eindhoven is lucky enough that this can be performed. The city will focus on five promising areas within the ring road. 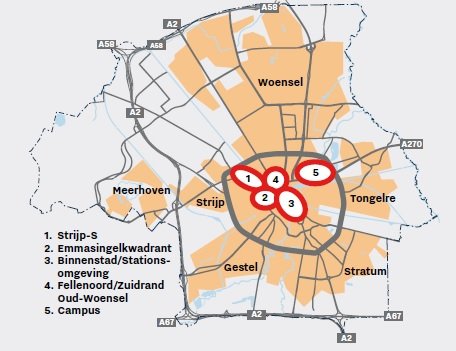 Quite apart from these five locations, I regularly think, cycling through the city: ‘With that place or terrain you could still do many things, there are opportunities that are not yet being exploited’.

In short, as an Eindhovenaar, I think: this is cool. Great city, great developments. So much is happening, so many areas are revived and given a new function. And great as well that I work at Brink on real estate issues that contribute to the development of this kind of cities.

Tom ter Bekke MRE is a real estate specialist with a special focus on inner-city area development. He is currently working for Brink Management/Advice.