We are visiting IamNL, an organization where more than sixty people with a refugee status work and who want to work for a company. IamNL helps them with a plan to participate in society, to learn Dutch and to gain work experience. One of the participants is Fawaz. He fled Syria three years ago and ended up in the Netherlands. “I was no longer safe there. I had to leave my children and travelled to the Netherlands via Turkey and Greece. I miss Syria and once it is safe over there, I go back again. I knew the Netherlands a bit; the land of cows, Phillips and Cruyff,” Fawaz says with a smile.

“I am an engineer. I have had my own office in Syria for thirty years. That makes it difficult to do the same job here in the Netherlands. Here companies work with other programs and everything is handled in a different way. I had an internship at a company, but that was too difficult. I had to learn the Dutch words used in the work field and the calculation programs. Unfortunately, it did not work. I think IamNL is a great idea and I respect it, but for me personally, it does not work. I am older and have an education and experience. Then it is difficult to take a step backwards. That gives me an uncomfortable feeling as if I am less of a person as a refugee. But I am more than just a refugee.” 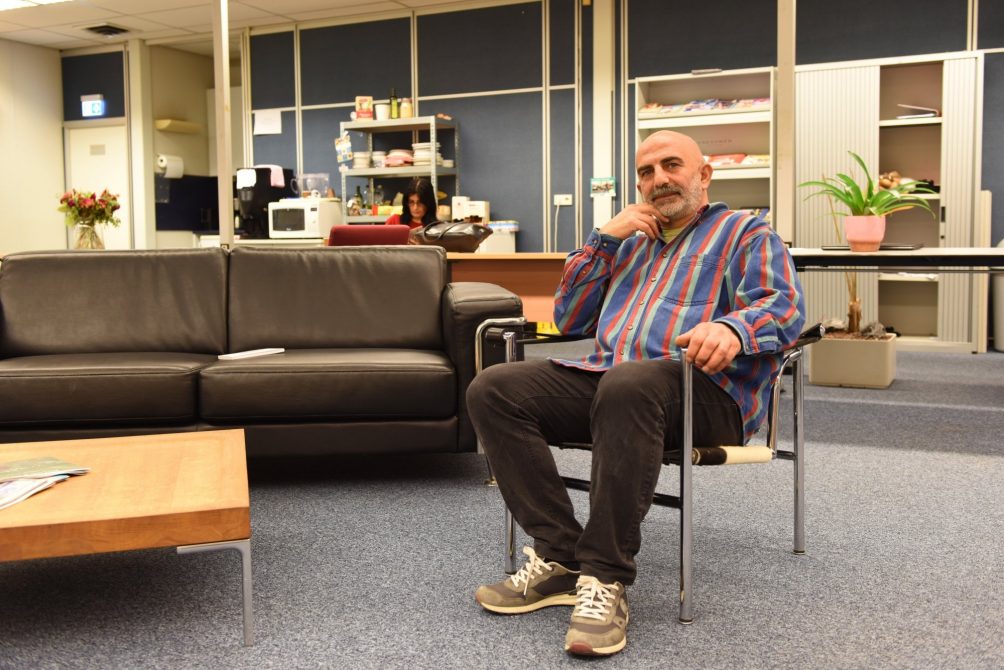 During the conversation, Fawaz looked up a photo on his phone. “Who do you think this is?” He asks chuckling. We see a smiling young man with black hair and sunglasses. We guess that it is Fawaz himself. “Yes, this is me! At work in Syria. Do you see how happy I am here?” From everything Fawaz tells us, we can tell he is missing his homeland a lot. “I was responsible for everything around a construction project. Here I am only a small part. The Netherlands is at the forefront of building and designing, but people do not always have an eye for talent here. I have so much experience, let me contribute to a company. I would prefer to help Dutch companies that want to work in Syria after the war or in other countries in the Middle East. I know the customs there and speak the language and I speak Dutch. I hope there are companies that see what I can do for them.”

Fawaz is a good storyteller and also has a lot to tell. He prefers not to elaborate on certain topics, such as the situation in Syria. That’s difficult. “Fortunately, I have a lot of contact with my children. I have a son and a daughter. If I would have the choice to let them come to the Netherlands or that I go back to them in Syria, then I will choose Syria. I love the Netherlands, but I feel more at home there. Many things are better organized in the Netherlands, although I do have the idea that people in Syria take better care of each other. Nobody is alone. The Dutch are calm and good people. Here are other problems than in Syria. The government arranges everything for you. I would appreciate it if Dutch people learn more about Syria. For example, it is not a poor country, people are often highly educated and the current situation in our country is more complex than people think. Actually, they hardly know anything about Syria.”

Although not everything goes smoothly, Fawaz is positive. “I am a social person and have made many friends in my time in the Netherlands. I have lived in various places in the Netherlands; in Nijmegen, Groningen, Oss and Doetinchem. I still have contact with my friends there. Here in Veldhoven I also know a lot of people. I make contact easily.”

The Space Week shows the social importance of space for…
Everything that can affect a plant
The 'Connected Worker': thanks to AI, employees are capable…
The innovative power of a 75-year-old techie with assertive…
Intercultural Dialogues between Dutch and Chinese…
Starting an innovative business can be done just fine if…
Manage Cookie Consent
We use cookies to optimize our website and our service. Help us to make our site better by accepting all cookies.
Manage options Manage services Manage vendors Read more about these purposes
View preferences
{title} {title} {title}