The regions of Waterloo, Canada, and Brainport, Eindhoven, have entered into an economic alliance. The Memorandum of Understanding was signed on Thursday. The idea behind it? The two regions have so much in common that cooperation on a strategic and operational level would benefit both parties.

A delegation from Brainport led by Mayor Rob van Gijzel is currently visiting Waterloo. The trip overlaps with King Willem-Alexander and Queen Maxima’s visit to Canada.

Brainport and Waterloo have also agreed to look into the possibility of other regions in Europe and North America joining the alliance. It would have to be regions with a similar character. Just like Brainport, Waterloo was recently named “smartest region in the world.” 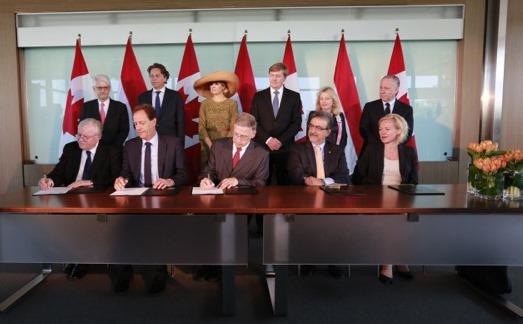 The collaboration will focus on topics such as trade, talent development, exchange of knowledge, research and development, the stimulation of start-ups and the joint prevention of economic setbacks.

In addition to the economic alliance, Brainport also came to an educational agreement with the Waterloo-based Perimeter Institute for Theoretical Physics. This should lead to the exchange of students, curricula and innovative educational projects.