The city of Utrecht will soon have charging stations that can charge and discharge electric cars. This allows the car to return electricity to the network in times of energy shortage. This new energy and mobility system is a result of a collaboration between We Drive Solar and Renault, who presented the system on Thursday in the presence of the Dutch king.

With this system, the partnership wants to contribute to the solution of a major energy problem: the supply of sustainable energy at times of scarcity. “We view the car as a battery on wheels,” explains Robin Berg of We Drive Solar. “The battery is so big that when using it daily, you would only use a quarter of the battery. Three quarters would only be used when you’re taking a long drive or going on holiday.”

According to Berg, the three-quarters of the battery you don’t use daily, could be used more efficiently as storage. “It is enough to power an entire street.” With the discharge poles, cars can therefore supply energy to homes when no wind or solar energy can be generated.

We Drive Solar and Renault’s open standard is a first in Europe, although the technology was previously available, for example in Japan. “After the Fukushima disaster, cars had to be adjusted to store energy, so that they could supply electricity in the event of a blackout. We have further developed the technology,” says Berg. 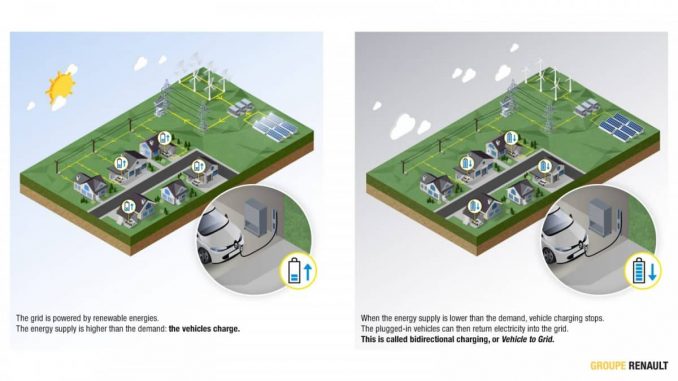 The partnership is currently applying the system to shared cars. In Lombok, for example, solar panels on the roofs of schools are generating energy, which is being used by shared cars in the neighbourhood to charge. “The next step is to work with project developers and apply it in new housing estates,” says Berg. For example in Utrecht, ‘MARK’ (the residential tower near Leidsche Rijn, which will be higher than the Dom) and the ‘Cartesiusdriehoek’ will have shared cars that can charge and discharge with local energy.

As a result, the value of energy will therefore shift. “Energy is getting cheaper”, explains Berg. Solar panels are becoming more efficient every year. “Twenty years ago, I placed solar panels on the roof and I’ve replaced them three years ago. I now collect six times the amount of energy I used to.”

According to Berg, storing energy will also receive value, as you can limit the peaks of the electricity grid. “Coal, nuclear and gas energy will eventually all disappear. Therefore, we need storage to be able to have power 24 hours a day, when the sun is not shining and the wind is not blowing. If you use the car battery as storage, you will earn money with a motionless car.”

In practice, it will look like a charging station where you can buy energy to charge your car, or even sell its energy to supply the energy grid. One problem that according to Berg still needs to be solved is the price of electric cars. “Electric driving is still relatively expensive as electric cars are still fairly pricy. Over the next few years, car manufacturers will be working to try bring that price down,” says Berg.

Utilizing electric cars as home batteries to relieve…
Hydrogen: great ambitions for transport and mobility, but…
Off to South Africa with an e-car and an off-grid charging…
Hydrogen: Working on the backbone of a hydrogen network
Sustainable and innovative WarmteStad heat network is…
Fast, faster, fastest charging on the go