It was one of the highlights of 3D byFlow’s short history: during a presentation in southern Germany, King Willem-Alexander and Queen Maxima also took a taste of the chocolate from byFlow’s 3D printer. “We hope that we will soon have this machine in our kitchen as well”, was the compliment the king gave when he left the presentation.

“Of course Mark Rutte’s visit to our booth at the Hannover Messe was also great,” says byFlow CEO Nina Hoff. “But this was still very special.” Meanwhile, her company, located on the High Tech Campus Eindhoven, has not been passive. The 350,000 euros that was earned in two investment rounds, has been put into the development of a portable 3D printer that can manage no less than 15 different materials, ranging from ceramic and glass to caviar and, indeed, chocolate.

Production and distribution are an important part of the process, so the whole Hoff family has spent many days with the assembly partner in Venlo. “We teach them how to put together our printers, so they can do it themselves.”

In addition, a lot of energy was spent on byFlow’s business proposition, says Hoff. “Because our latest model has not only become cheaper but also more robust and reliable, it is now easier to get started with sales. We now have sold 40 printers throughout the world. Our devices will soon be used in Dubai, India and Colombia, to name just a few places.”

“Building the Order Book“, as Hoff calls it, is also carried out in her own way. Which means, among other things, that an apple pie is taken to each potential supplier. Unfortunately, it doesn’t come directly from the printer yet, but looking at all the materials byFlow is working with, the king’s joke might soon turn out to be true.

At least for the desserts that is, because a big chocolate manufacturer is one of the partners Hoff is talking with at the moment. Somewhere in the course of 2017 this should result in the first real chocolate printer. The King may want to think of pre-ordering.

Read also about the role byFlow plays in a 3D printed 3sterrenmaaltijd, beginning next week in London. Forbes published it:

“If you’re in London on July 25, 26 or 27, you may have the opportunity to enjoy a nine-course 3D printed dinner, complete with 3D printed utensils and furniture. The food is created through byFlow, makers of a portable multi-material 3D-printer, and prepared by chefs Joel Castanye and Mateu Blanch; dinners guests will be able to see real-time 3D-printing of their meal, but the event will also be live-streamed to the public.” 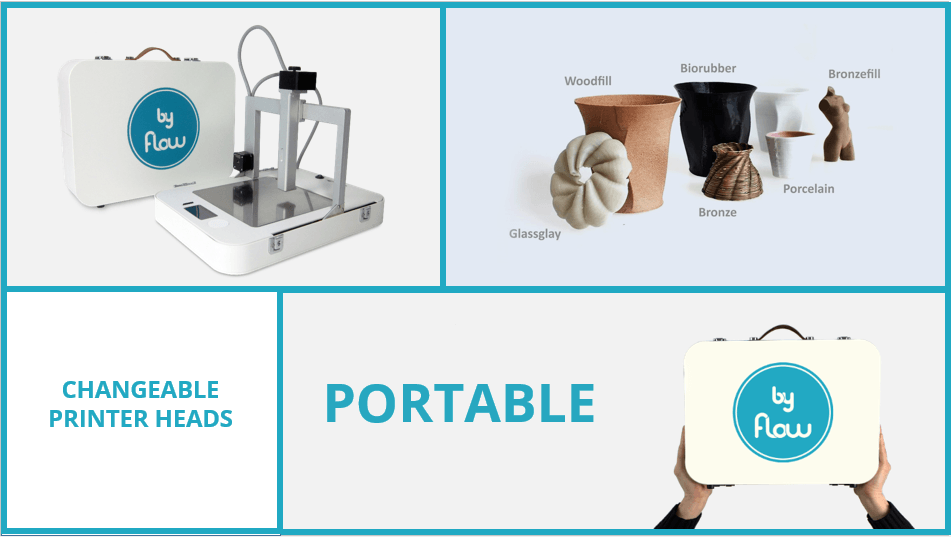 R&D is in place, patents have been arranged, and production…
Fe+Male Tech Heroes inspire people to shape their future
Academic heart, commercial head
Digital mentor sessions on that little voice in your head…
Dortmund: where innovation drives community spirit
See, try, and learn at the High Tech Campus Open Day
Manage Cookie Consent
We use cookies to optimize our website and our service. Help us to make our site better by accepting all cookies.
Manage options Manage services Manage vendors Read more about these purposes
View preferences
{title} {title} {title}