Let’s call him Frans, a fictional person. For a quarter of a century, he had been away from Eindhoven, the city of his youth. What would he find if he would return these days? A buzzing city that underwent a complete metamorphosis.

Once landed, Frans had already seen it through the airplane window: this looks different than 25 years ago when he last saw the city. What was still a regional airport at his departure, is now called Eindhoven Airport. Frans descends the airplane stairs and a little later he arrives in a large departure hall. It is filled with people going on a holiday and businessmen of all kinds of nationalities. On screens, Frans sees that from Eindhoven one can fly to the whole of Europe. Dreadful for local residents, Frans thinks, but very nice for all those people who no longer have to go to that miserable Schiphol Airport.

Frans walks out of the building and sees the remains of a collapsed car park. He has read about it on the internet. Sometimes progress can also go too hasty, Frans thinks when he takes a bus towards the city centre. An electric bus, made at VDL, in this region. It’s part of the largest electric bus fleet of Europe.

Frans is amazed when the bus takes a turn and enters Strijp-S. In his youth, this was the ‘Forbidden City’ of Philips, hidden behind walls. Now the factory buildings have been transformed into beautiful residential complexes. The construction cranes show that more new buildings are being built. Here at Strijp-S mainly young people live, above fancy shops, coffee bars, and eateries. Philips’ old halls are now used by skaters and BMX-riders. With hip-hop or punk rock on their ears. They come from far away to Eindhoven, their urban mecca. Also because of the graffiti. The Berenkuil, actually a concrete traffic junction, is world famous in the scene of paint sprayers.

Hey, there’s the NatLab, Frans sees through the window of the bus. In that former Philips bastion, you can now go to the best movies. And there’s the Klokgebouw as well. That’s where my father used to work, Frans muses. It now has a rock academy, a concert hall and a hotel that breathes rock and roll. Many other old Philips buildings on Strijp-S are now full of small businesses that are eagerly trying to invent the future. In the summertime, Strijp-S also buzzes out on the streets, with festivals and a monthly market with organic food and drinks from the region.

Only after he has left his bus, Frans finds out how many good restaurants and bars the city offers in 2018. He has just seen the PSV stadium. Much bigger than in the past. It’s like the Centre Pompidou! And PSV has won no less than ten country titles since 1993, and they have been celebrated well around here. The eleventh one is approaching.

In the Lichttoren, Frans drinks coffee at Usine, a grand café with an industrial appearance. Frans has a beautiful view of a funny building that looks like a giant, oval dented ball at 18 September Square: so this is the Blob they were talking about! And all those tall buildings have been added. Eindhoven has acquired some real city allure, Frans mumbles.

He asks a woman where he should eat tonight. The Karpendonkse Hoeve, does it still exist? “Certainly sir, but we have so much more. Starred restaurants like Zarzo and Wiesen, but you can also eat well at Mood and Valenzia. Or you can try Wynwood at Strijp-S. At Radio Royaal or in the Ketelhuis you can eat an alternative meal, in the spirit of André Amaro.” Ah yes, Frans thinks, I’ve read about Amaro. This little Portuguese man has turned the squatted Stroomhuisje into a stronghold of the local artistic underground scene. Eindhoven Rock City is still alive!

Space for experimentation, it has always characterized Eindhoven, Frans thinks. But these experiments used to take place behind closed doors in the Philips laboratories. The city itself remained a bit boring. How different this is right now. Eindhoven seems to have become a vibrant lab of life itself. Which has made this city so much more fun.

When Frans starts walking through the city centre, he constantly hears other languages. Spanish, American-English, Indian, Pakistani, Chinese. And a lot of Flemish, coming from the mouths of Belgians who are spending quite some money. Frans sees Asian families coming out of shops with full bags; expats who have come to the city to do research at the TU/e or earn a good living at ASML, Philips, NXP, FEI or the dozens of other high-tech companies that have made Eindhoven famous in the world. And all those foreign knowledge workers and successful designers leave their euros in our shops and restaurants.

Frans checks in at the Art Hotel, one of those many new hotels that started in the city during the last ten years. The growth in hotels must certainly be due to all the businessmen and technicians who have to be here, Frans asks the receptionist. “Certainly, but also because of all our events”, is the answer. She proudly talks about Glow, the Dutch Design Week, the concerts of Guus Meeuwis, the marathon… They bring turbulence to the city and make it glow.

The evening has fallen. Frans wanders through the city again. Ah, this is the Catharinaplein. Surely this was a total failure for a long time? The tiles were no good, the shops were empty. And look at it now. While on one side Vapiano is full of eaters, there is a long row of hungry people for Happy Italy. A daily scene. In the queue, there are many foreign students of the TU/e. Around the corner, Frans enters the Gourmet Food Market. Dozens of little eateries under one roof. Wow. Again, there is hardly any empty chair. Frans orders sushi and here again, he hears all the languages of the world. It even smells multicultural around here.

Frans remembers how he left the city in 1993. Philips and DAF had created a social battlefield. Elsewhere in the country, Eindhoven was seen as a sleepy provincial city with an inferiority complex. And now? Eindhoven seems to have become a magnet for creative and smart people from all over the world. The administrators of this city are now walking up the Binnenhof full of confidence, claiming money for the region, as Frans read on ED.nl.

Hey, this was the Schellens factory, Frans thinks when he walks the banks of the River Dommel. Light is still burning! This is where the new town brewery is located. On the beer menu, he sees names with Eindhoven connections like Witte Dame and 240Volt. Everything has been brewed in the adjacent room.

Frans speaks to a group of men. They work at TNO, ASML, NXP, Fontys and TU/e. Successful, highly educated and happy in this city. Yes, they tell Frans, they know that Eindhoven still has problems. Many poor families, air pollution, congestion on the main roads, a city administration that has no control over money, almost no more affordable homes… But apart from that, it’s a great city to live in. “Have you already seen the swimming stadium next to the ice rink?”, the men ask Frans. The men are more than certain: Eindhoven has become their city. Even the graduates of the Design Academy are staying in town after their exams.

No, this is no longer a boring city, it’s full of life here, Frans thinks on his night walk back to the hotel. On the terrace of café Calypso at the end of the Stratumseind there is a sign: ‘Wa hebben we ‘t goed he‘. Yes, Frans agrees: life is good in Eindhoven. On the high waves of economic success, this city has developed into a lively, creative, optimistic and multicultural melting pot, according to Frans. Thanks to Philips, Eindhoven has never been such an old-fashioned Brabant place; it has always been an open city accustomed to pioneering and welcoming newcomers. Perhaps that’s the driving force behind the current success. In this city, nothing or nobody is strange. This city builds and rebuilds in the rock-solid belief that it is getting better.

“And tomorrow I go to Helmond”, French thinks when he falls into his hotel bed, completely satisfied. In his youth, Helmond had a bad image, you shouldn’t be there. And now? Frans read about the success of Brandevoort, almost a city in itself, where the construction of the smartest district in the world is starting this year, set up socially and sustainably. Frans also read about the formidable restaurants they have in Helmond today, how they turned an old church into a theatre and a burnt-down factory into a cultural temple. But also how the transport of the future will be invented at the Automotive Campus.

Frans starts feeling dizzy. A little later he turns off the LED next to his bed. From Philips, he sees. French laughs. And it says it aloud. It’s great around here.

Frans is a fictional person. For the rest, this article represents the truth as faithfully as possible. 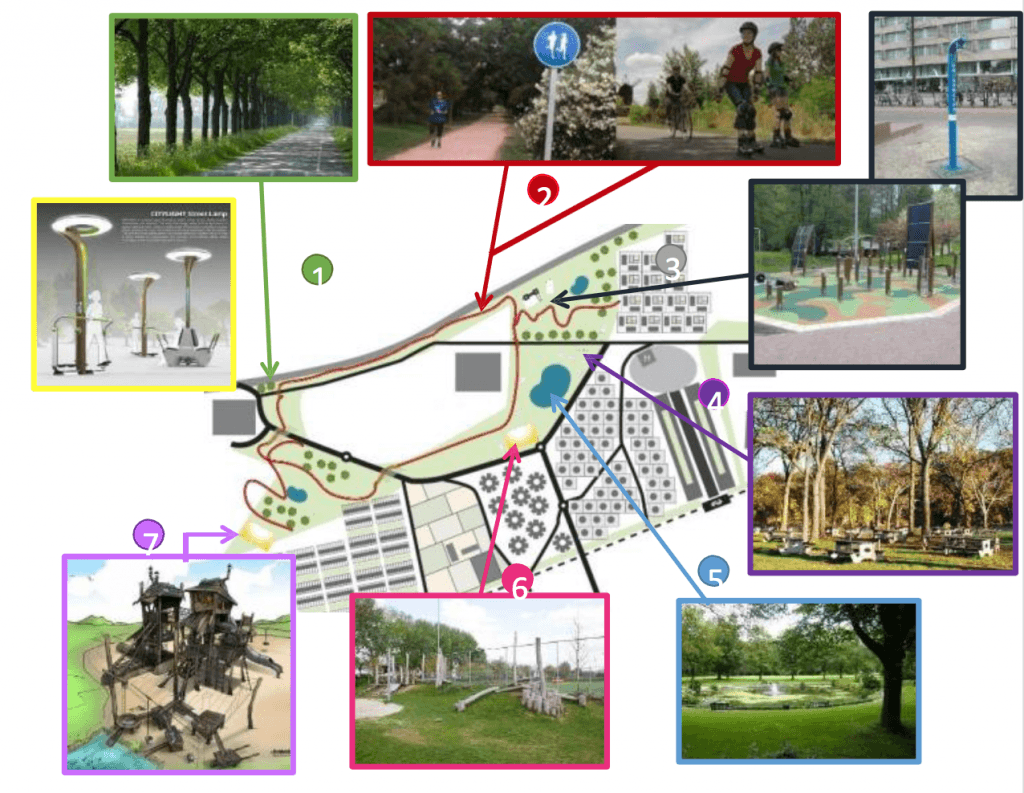 Helmond is home to the world’s smartest district
At the end of this year, if all goes well, the first trial homes in Brainport Smart District will be built. In the Brandevoort district of Helmond, space has been reserved for no less than a thousand homes that together will have to form the ‘smartest district of the world’. All houses will be more than energy-neutral, equipped with the most modern safety and care gadgets, and only fully sustainable vehicles are allowed. They will be cleverly shared by the users, which also applies to the communal living spaces, public greenery, and amenities. The district is an idea of TU/e-professor Elphi Nelissen, who wants to develop the housing form of the future in Helmond. The municipality immediately joined, as did the Tilburg University, the province of North Brabant and the German counterpart of TNO, Fraunhofer. Nobody knows yet what the neighbourhood will look like, but expectations among the participants are high.

“Extremely proud” of Eindhoven
Jip Goyvaerts (24), chef at the restaurant Wynwood at Strijp-S, was born in the year that DAF went bankrupt and Eindhoven was in a deep crisis. He is ‘extremely proud’ of how his city has developed. “I have tattoos of all that was important in my life. Look, this too.” Jip points to a light bulb on his arm as a symbol. “Eindhoven never really counted for anything compared to the big boys in the Randstad, but that has changed. When you see which big companies and large chains are coming to us… So many good restaurants throughout the region. Zarzo, Lindenhof, Wiesen, Tribeca, Vane, Treeswijkwijkhoeve, Wollerich, De Rozario…. and Wynwood of course. We make a very refined meal here, for an attractive price, often for business people, many lunches too. Spaniards, Portuguese, Chinese, they all come here. Yes, this is the new Eindhoven.”