Every week there is a news item about the latest technological breakthrough, almost every day a new app or gadget appears. But what impact does all this technology have on our society? Which direction is this heading in and how do we steer it in the right direction? Developers, scientists and other interested parties will be discussing these questions at the Brightlands Smart Services Campus in Heerlen in the near future. During the New Year celebration, video artist Geert Mul and professor of digital culture at Maastricht University, Sally Wyatt,  talked to each other about what technology actually is.

Marc Wouters invited the two speakers to start the discussion. Wouters is an advisor to the CEO of the campus and strategic consultant at APG and believes it is important to be more aware of the possible consequences in the development phase of new technology. “Technology development is often about feasibility. Can we make or develop something? It is often for or against. Yes or no. Black or white. 0 or 1. I want to enrich this way of thinking by starting a discussion and challenging people to look at technology and its impact on society in a different way.” 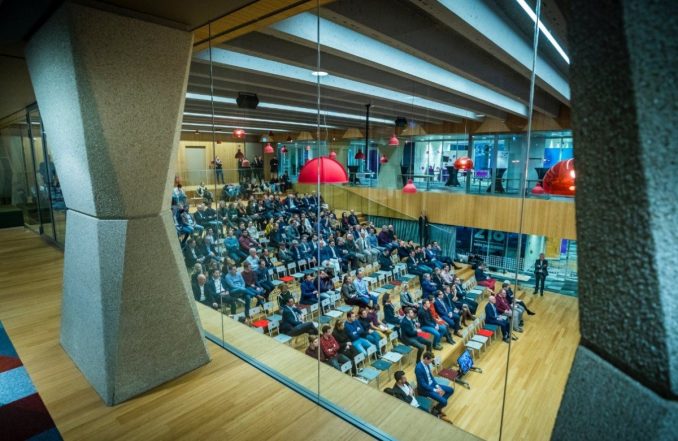 He wrote this enrichment in the form of a paper – “more of an invitation that got out of hand”. – in which Wouters reflects on the technologies and services that are being developed in Heerlen. He also looks at the role that the organisation can play in the debate on technology and society. “Brightlands’ philosophy is to make the world a better place. But what is a better world? And how does technology contribute to this? Especially when you talk about big data and artificial intelligence, there is a strong global discussion about it. When figures such as Stephen Hawking indicate that AI brings risks that can mean the end of mankind, we have to think carefully about this.”

According to Wouters, new technologies or inventions often have a different effect than the developer or inventor had in mind. “A silly example: the escalator. This would allow people to get one floor higher faster. But what do people do on an escalator? They stand still. This actually makes it take longer to get upstairs,” says Wouters.

A tech giant like Facebook also has a different impact on society then was originally the idea, says Wouters: “Facebook was initially a sympathetic and social platform that brought people together. Now there are all kinds of discussions about the platform. Politics, privacy and even people who wonder if their lives still belong to them.”

Geert Mul adds: “We are constantly connected to the rest of the world, we are practically half cyborgs. See what you can do with a smartphone in your hand. Finding information used to be a problem, but with the advent of the internet, we are constantly getting streams of information in. How do we deal with that? Does this change our view of the world and the culture in which we live? It is good to think about that.”

Wouters: “If you put all those pieces together and look at the bigger picture, you can only say that technology changes society. Sometimes in a way that wasn’t designed in advance. There is also a responsibility here for developers to at least think about this,” explains Wouters.

Sally Wyatt thinks that just thinking is not enough and sees more in stricter regulation. “You see that some tech companies are looking for the limits and going over it. They break the rules until the rules are changed.” Uber, Airbnb and Deliveroo to give a few examples. “You can also see that a few big boys, especially in the US and China, have all the power. Especially in China, privacy is looked at completely different than in Europe. But there is no European counterpart, where European values such as transparency and privacy are important. In this, I see a role for the campus to develop alternatives. Surely it’s not acceptable for a few tech giants to dominate the entire market?”

“That’s why it’s important to have this conversation with the entire ecosystem”, Wouters nods approvingly. But to come up with regulations straight away, that is not the most important theme for him with regard to the Brightlands Smart Services Campus: “You don’t want to crush a discussion right away. We start a discussion that will – hopefully – make developers think more consciously about the possible dangers or unexpected impacts that technology can have. I don’t want to sound like a Buddhist, but the road is more important than the goal. No end product has been defined, no agenda has been drawn up, so we are very open about it. New technology is not a law of nature, but human work, it is controllable. That’s why it’s important to have this discussion, it’s also about thinking about what kind of society we want to live in.” In April, another meeting is scheduled to discuss this theme further.

Cultured meat inventor Mark Post: 'Less pollutants in…
Academic heart, commercial head
Everything that can affect a plant
‘Cancer isn’t a lifestyle disease’
‘I want my children to be able to live in a clean world’
Better for the patient, more efficient for the surgeon