The initial idea was that of Elphi Nelissen, the Dean of Architecture at the Technical University of Eindhoven. But for four days now, dozens of people have been brainstorming about the exact implementation of “the smartest district in the Netherlands”, which is also an important item for Helmond City Council. In the meantime, the province has embraced the Brainport Smart District project and hopes that the five major Brabant cities will benefit from it. But how it will look exactly in 2022, that will also not be completely clear on Saturday evening when the brainstormers leave their pressure cooker at the Automotive Campus in Helmond.

“What do we need to start with today to make Brainport Smart District by 2022 a lighthouse as the most liveable, adaptive residential area using cutting edge research and technology to enhance socio-economic development?”Malik research question, 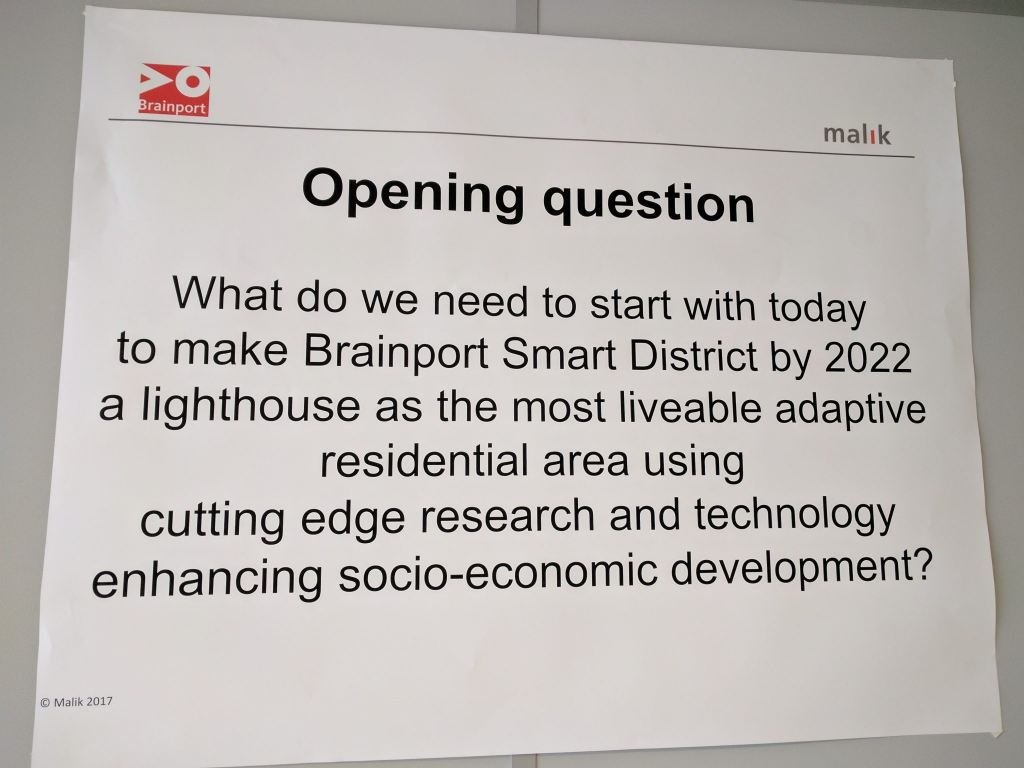 Councillor Paul Smeulders called it his ‘eureka’- moment. “For years we have been looking for ways to expand Brandevoort to the other side of the tracks. It had to be as beautiful as Brandevoort itself, the neighbourhood for which we are very fortunate, but we did not know how to. Just at that moment, Elphi Nelissen came with her call to build, somewhere in Brabant, the smartest neighbourhood in the Netherlands. It is then that we knew: that suits us to a tee.”

All five major cities in Brabant were able to pitch, and it would take months for a decision about the location to be made. At least, that was the expectation. But after two days it was already decided: it would be Brandevoort. Since then, everything has been moving fast. The province joined, along with the TU/e and the University of Tilburg, because of the emphasis on social innovation, and you cannot imagine how much business interest there is. Everyone wants to participate. And conversely, that is also valid: there is no project that has opened so many doors for us as this has.”

The neighbourhood, with a name ‘Brainport Smart District Brandevoort’ should be smart in all respects: both in housing and sustainability, as well as in mobility, health, safety, and social cohesion. From 5 to 8 April, 42 representatives from government, educational institutions, entrepreneurs, and residents will discuss how they can achieve these developments together. They will be assisted by Swiss consultancy firm Malik who have developed ‘Syntegration’, which is a unique process approach, specifically for this kind of complex challenge.

The outcome of the conference should not only provide a clear framework for the realization of Brainport Smart District (what does the neighbourhood look like, what kinds of technologies are being used, what kinds of houses, roads and public space are being built), but also a framework for how the district can be managed and the business cases that are needed for this purpose (how do the government, educational institutions, businesses and residents best work together to realize a liveable and future-proof feasible neighbourhood?).

That is ambitious indeed. But Syntegration has a strong track record. “Of the thousands of projects that we have done around the world, not one has failed”, says contributor Fredmund Malik. “Of course, we do not know what is going to happen in advance, but I guarantee that there will be some surprises that the directors haven’t yet thought of.”  Syntegration should especially help bring together the rationale and the emotion of the stakeholders and the solution for the complexity of the issue. Malik: “We bring intelligence to a higher level by also releasing the social energy.”  The outcome will – unlike a democratic process – be achieved with the biggest possible consensus, Malik promises.

But after Saturday, it is just the beginning, as delegate Annemarie Spierings knows. She has high expectations of both Syntegration and the smart district itself. “We have agreed as a province to be energy neutral by 2050. It is essential to achieve that goal soon with these kinds of projects. And look at climate change: are we able to succeed in adequately absorbing extremes in water and drought, and what role does high tech play in this? But it is more than this: social resilience also plays an important role here. The involvement of the residents needs to be understood in every aspect. Eventually everything will come together here, it will be the showcase for Brabant, for the Netherlands, and maybe even for the world.”

Talking about this world: there is a big chance that, at the same time as Brandevoort, steps will be taken in many other places to bring that smart city closer.  Smeulders: “We are, understandably, keeping a constant eye on this, and that is why we also work closely with universities, but also with a research institute such as Fraunhofer with their Morgenstadt-initiatives.”

Living in your own sustainable social housing