On January 23, Edgar van Leest said farewell as Manager Strategy & Public Affairs of Brainport Development. He has spent more than 10 years working on strategy development and lobbying for Brainport Eindhoven. In a farewell symposium, to which CEO Daan Kersten of Additive Industries and commercial director Bert-Jan Woertman of the Eindhoven University of Technology also contributed, he offered his audience a reflection on the present and future of Brainport Eindhoven. For those who could not be there, and those not speaking Dutch, the complete speech by Edgar van Leest, translated into English: Brainport Eindhoven, 10 years ahead!

What should we do?

Do not run away from our increased responsibility as a determining factor in the Dutch economy. But don’t walk beside our shoes out of pride either. Cherish our humility. Stay at the forefront.

Pulling the future towards us…. very nice, but also very difficult.

For the shorter term, say up to 2-3 years, you can focus on the current trends. But in the medium term, about 3-7 years, you really have to take uncertainties into account. And then scenarios offer a solution. I have always been very enthusiastic about the methodology of scenario planning.

In 2014, we prepared Brainport Scenarios. In it, we laid the foundation for the adaptive Next Generation Strategy. For now, I see as the most crucial but also uncertain developments:

Talent base: Can we, as a high-tech ecosystem, succeed in mobilizing and retaining innovative talent sufficiently or insufficiently?

Changeability: do we change evolutionary or can we develop a revolutionary power of change?

Within these options, we will have to find our successful future. And what else awaits us? A tech-cast project predicted around 2010 – after consulting more than one hundred high-tech CEOs, scientists, and engineers – a series of innovation breakthroughs. In the period up to 2030:

Energy storage
Desalination of seawater
Recovery of cancer
A fixed moon base
The free choice of the sex of children, by which I assume that they mean a choice before birth….

The project is finished and the website is offline. Perhaps it would be nice, even as an international outreach from within our ecosystem, to start such an exploration again. I’m sure that Arnold Stokking is all in favour of this, so for those who like it, as far as I’m concerned, we already have an initial project team meeting right away….

It’s only recently that High Tech Campus Eindhoven and Strijp-S have opened up to business. Who could have thought that there would now be more than 160 and 530 companies based there? Companies that are more than ever active in new innovation models.

This is evidenced by the PWC Global Innovation survey among the 1,000 most innovative companies in the world:
20% is actively engaged in setting up incubators;
30% with innovation venturing;
40% with open innovation.

Here in Brainport, these figures may not even make such an impact. We know that the world is not a flat place, but that talent, specific disciplines, and innovative opportunities are concentrated in certain areas of the world. We recognize the importance of proximity in forming any cooperation.

We are “mastering” that. Because thanks to Philips, we all speak more or less the same innovation language.

Previously, I was allowed to guide Bruce Katz of the famous Brookings Institution (located at the ThinkTank Row in Washington) in Eindhoven. He is the author of the pioneering book The rise of Innovation Districts in America. I took him to High Tech Campus, TU/e and Hans Duisters’ Sioux Campus, and of course to the Mayor’s Office. While enjoying a Diet Coke, he told his findings.

That you could tour such a complete ecosystem in one day…………….. Amazing.
And that everyone kept the same story in their own words………….. Fabulous.
And on your way to the station, that you have a City-Mayor that looks from the outside, has a passport and even travels to Asia……… Unbelievable.

But we have already come a long way. A steep learning curve from closed innovation to open innovation to a complete innovation ecosystem. Bert-Jan Woertman always brought it into a catchy one-liner:

From “the lab is our world” to “the world is our lab”.

West-Coast USA does put something in the opposite direction, with Uber libertarianism: ”For your information: We Are Great”!

From “First to discover” to “Leverage on ideas by others”.

If we want to attract more innovative talents and businesses, including those from the PWC 1,000 survey, to collaborate with or establish themselves in Brainport Eindhoven, we will have to really stand out as an innovation ecosystem.

And that’s not easy.

The world’s oldest and most bio-diverse ecosystem is the coral reef. And in analogy with that metaphor, Brainport also has a special diversity and colourfulness. But that is not always visible from the outside. At best, we see a striking disturbance in the sea surface. We must continue to work on raising awareness and visibility.

And another analogy. We cannot rely solely on Philips and everything that has come out of it, including ASML. We also need new coral structures.

New coral is already forming. But it takes time. We must, therefore, continue to focus on this over the next 10 years:

Holst Centre and Solliance.
Further concentration of testing and development skills at the Automotive Campus in Helmond.
The factory of the future of Brainport Industries.
And the TU/e with its institutes and student teams such as (Solar team Eindhoven, Team Solid and the biosensor TEST).

These are the maternity rooms for a flourishing and innovative new life.

And yes, I agree with the appeal of Dutch Design Foundation director Martijn Paulen in the Eindhovens Dagblad of 22 January. A knowledge institute in the field of design and digital culture also belongs here, ”a place where you can fall in love with design and technology”.

That the Triple Helix cooperation is our trademark I do not need to explain here anymore. This includes this picture, which I used when I was still working at the SRE.

One of my last presentations in Brainport was at Philips Lighting for a group of 40 economic diplomats representing our trade interests from the Dutch embassies and consulates in the world. When I said that one can differentiate between these three economic cooperation models, everyone nodded in agreement. And also when I said that each model has its own origin: USA – CHINA – BRAINPORT.

But that is all an abstraction. In practice, I have always found it difficult, that triple helix. After all, who is friends with whom? If we think that, in order to fulfill specific location requirements for Brainport Eindhoven, we need the national government for legislation, financing matters that go beyond our limits of pain, or supporting policy, it is also in our interests to work together as companies, knowledge institutions and governments in a self-confident manner. No hidden agendas! That, over 10 years of lobbying experience for Brainporthas taught me.

In 3 phases we climbed up to where we are now.

Substitute. At first, forced by the economic crisis, we got the opportunity to temporarily get a good starting position in the political-administrative network with our arguments for part-time unemployment, the proposal of the knowledge worker scheme, expansion of the WBSO and export credit guarantees. As a substitute player, we could join the game temporarily.

Starting player. We have succeeded in developing this into a basic position at Government Investments for Infrastructure and a place on the Dutch Trade and Investment Board. We became a starting player.

Game decider. From there, we have become a deciding player, a player in the center of the field, through intensive cooperation with VNO-NCW, FME in the context of national industrial policy and with Zuid-Holland and regions Amsterdam and Utrecht in the context of the Spatial Economic Development Strategy (REOS).

So from substitute to starting player to game decider. And all that on this kind of playing fields: 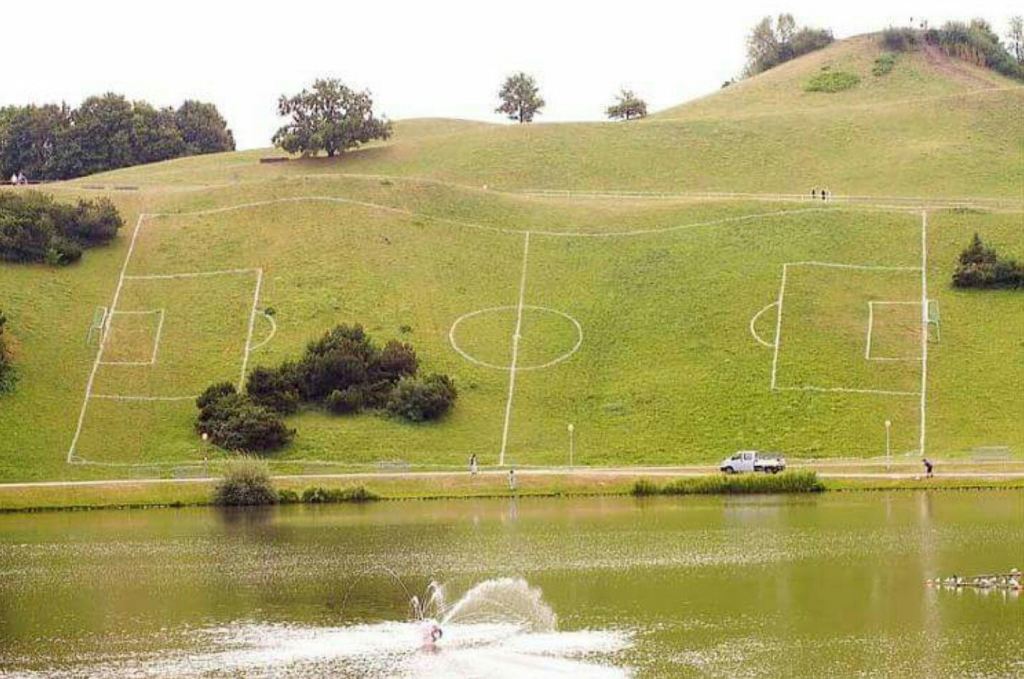 With a good elaboration of the Brainport National Action Agenda, we are now taking the step to becoming the leader of the Dutch economy.

But we will have to keep telling it: Brainport Eindhoven is not just a story of a successful region. Developments of Brainport and therefore investments in the continued success of Brainport are of vital importance for the whole of the Netherlands. Not only economically, but also in other parts of the country due to growth in exports and employment through subsidiaries and suppliers. Through Technology, Design and Knowledge, we offer solutions to many challenges in society.

How can we pull the future closer toward us? If you want to actively work on an innovative climate – an innovative environment – then it is good to realize this: innovation is not necessarily a contest of winners. It is more like the other way round. It’s about managing your loss in the best possible way as well. And that is positive. Know how to learn from it. But that’s quite difficult. This applies to individual companies, but also to a collective of organizations or even a whole region.

I think that’s exactly what we are doing in Brainport Eindhoven.

If you look at the things from a bit more distance, you pay less attention to the details and see the big signals. The core of the whole. That also applies to me, the last few months and weeks. Some things actually just became crystal clear to me. Now I am finally beginning to realize what WE are and what I was allowed to share. These are the main lines of Brainport Eindhoven.

A community of exceptional and extremely diverse talents. With an enormous urge to do good, with technology, knowledge, creativity, and entrepreneurship. Under a vague chain of command, which likes to show its validity through incidental events. And all this with a rather abstract mission. And in a constant lack of clarity as to where we actually have arrived in achieving this mission. Is it episode III or VII?

Yes, there are many analogies between Brainport Eindhoven and StarWars.

If you leave out all aspects that are not relevant to the subject matter, then there is only one conclusion possible: we are a kind of rebel army. I hope to be part of this for a long time, be it from a different combat position.