Five student teams from Fontys, Avans, Tilburg University and the TU/e presented their answers to questions about applying robotics in healthcare, during the grand finale of the Brabant Robot Challenge in Natlab, Eindhoven this Monday.

Preceding the challenge, the teams were handed a case from the Challenges partners. The big winners were the students that looked for improvements of health care, applied robot Zora in its treatment of elderly people with dementia as requested by Vughterstede. They received an award of 1,000 euros.

In that group’s work, it became clear how simple innovation can be. “Why not let Zora sing an Abba song instead of Gangnam Style”, Sieta Ludema, member of that team, said in her presentation.

When Ludema’s group came to do some research at Vughterstede, they saw how Zora was placed in the middle of a group of elderly to get the patients to sing along with a song, music is often used to treat dementia. Upon playing Gangnam Style however, most of the people in the room seemed rather startled and afraid.

Another, quite simple flaw that was pointed out by the group’s research was also one that confused the elderly. When Zora asked one of the patients what number should be filled in when six was multiplied with six, the patient answered 36. Zora then told the patient this was the wrong answer.

If the problems the students dealt with seemed small Monday, this could be because they were overshadowed by a panel discussion which focussed on the possibilities of applying robotics in health care and other sectors in Brabant.

For the panel discussion Mark Menting (Founder of Smart Robotics), Bert Pauli (Representative of Economics and Internationalization of the province of Brabant) and Ton Wilthagen (Professor Tilburg Law School) joined the table to discuss the opportunities and bottlenecks of robotics in Brabant.

The biggest opportunity that robots bring, comes in the idea that they can be a solution to ageing employees. Especially companies that rely on relatively cheap personnel to do physical labor can benefit from this. Robots can go on when people are no longer able to, was one of the conclusions in the discussion.

Ton Wilthagen added to this that people often don’t stop working because they don’t want to work anymore, but stop because they do work they physically can’t handle anymore. “Those people can be used somewhere else, let the robots do the heavy lifting.”

In the future, robots will be used more to help prevent these types of problems. But some groundwork is still needed for that. According to Bert Pauli, there’s always room for improvement, he thinks the government should always push to connect SME’s with big companies. “Also, entrepreneurship should be rewarded in our colleges”, Pauli said.

In a longread that BrabantKennis published about the possibilities of robotics in Brabant, it becomes clear how big the impact the robots can have on industry in the province, actually is. BrabantKennis describes a positive attitude towards robots as ‘common sense’.  The longread predicts there will be a Golden Century for the industry of robotics. 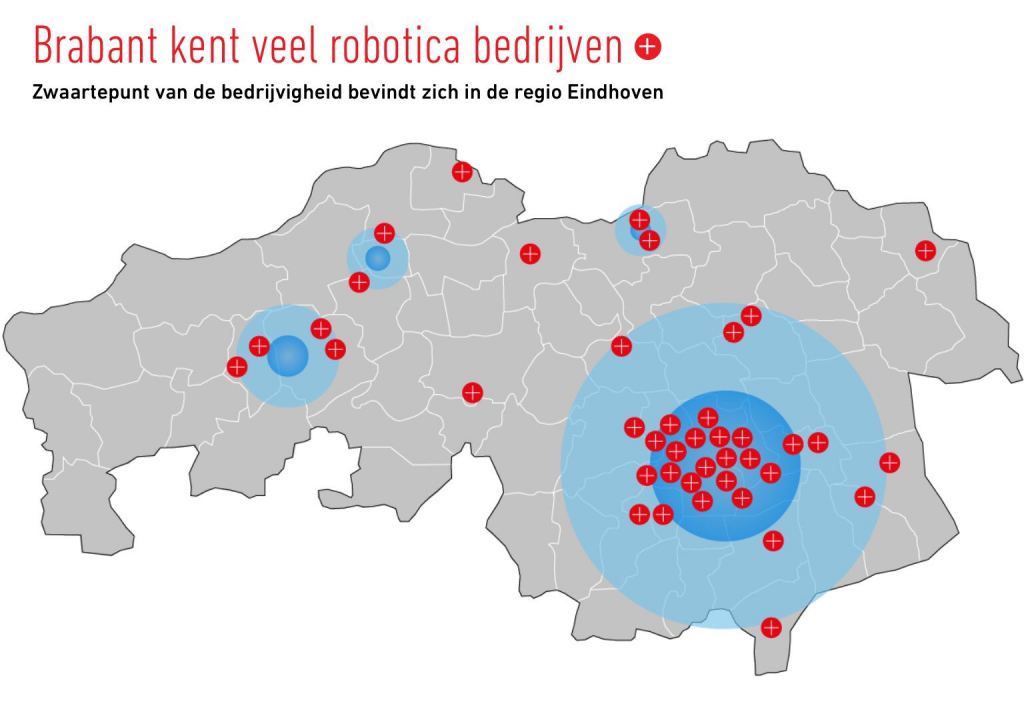 And Eindhoven could play a vibrant role in that century. The majority of Brabant companies that work with robots are based in Eindhoven. Worldwide, the amount of robots is predicted to rise with 12% each year.

According to representative Pauli there is still much to gain in this robotics revolution. Especially logistics companies can benefit a lot from robots, a branche that already owes a lot to robots according to the representative. He names VDL as an example. “Without robotics, those factory halls in Veldhoven, today would all be empty.”