Asphalt, roads, rocks, buildings – that’s how Cees Jan Pen describes Veldhoven, ASML’s home base. As an economic geographer, Pen is an independent member of the SER in the province of North Brabant and is a member of various national committees for advice on regional development. Pen is voicing his concerns about the state of Veldhoven’s city centre. In last week’s best-read article, he describes how the municipality desperately needs a vibrant heart. Not only for the native Veldhovener, but also for the expat from Taiwan.

The town needs to be revamped. A lot of catching up must be done when it comes to urban development. But isn’t Pen thinking in too narrow a way? After all, Veldhoven is part of Brainport Eindhoven, a region with 21 municipalities and about one million residents. Surely this urban area cannot compete with London (almost 9 million residents) in terms of facilities and environment?

No, says also Peter Savelberg, creator of the TristateCity model. This model merges the Netherlands, the Flemish part of Belgium and the Ruhr area in Germany into one large metropolitan region. “Over the past twenty years, people have increasingly moved to large cities as a part of urbanization. This has resulted in a vast urban agglomeration where between 15 and 30 million people live. There are around sixty of these ‘megacities’ in the world. All these cities or metropolitan areas are competing for talent and investment.”

Dutch cities, which have an average population of 150,000, are far too small to engage in this struggle, according to Savelberg. “In an area like Shanghai or Mumbai where some 20 to 25 million people live, the competition between Eindhoven and Amsterdam is irrelevant. I think we should move away from competition between cities and bring together all the various strengths of the different regions. Now you see separate municipal groups travelling around the world. They are all proclaiming that they are European hotspots. A Metropolitan region of Amsterdam (which includes 32 municipalities), a cooperation between Arnhem and Nijmegen (which includes 16 peripheral municipalities, ed.), the Brainport region – and so many others can now be found. It is not my intention to upset people with this, as I know it is a sensitive issue.”

But still Savelberg thinks it’s a shame that regions want to widen their markets on their own. “You are much stronger together. If you start out flanked by Flanders and North Rhine-Westphalia, you can count on an area with 35 million residents. There is a lot of prosperity and wealth in this area and a in particular, a lot of knowledge. People are highly educated, and the area has 8 universities in the world’s best 100. If you look at it this way, you are in the world’s top 10 in terms of megacities.”

The only thing is how do you do that, connect regions? Should everything have to be overhauled according to the Chinese metropolitan model? “Absolutely not, the Dutch, Belgians and Germans really do not want to want to live in 100-storey skyscrapers. We are used to space, a private garden, a good barbecue and things like that. Whereas in China they do almost everything by public transport, the Dutch hop on their bicycles. But the Germans and Belgians are also doing that in growing numbers. This is not only good for sustainability, but great for everyone’s well-being too. This is only set to increase with the growth of the electric bike,” says Savelberg. 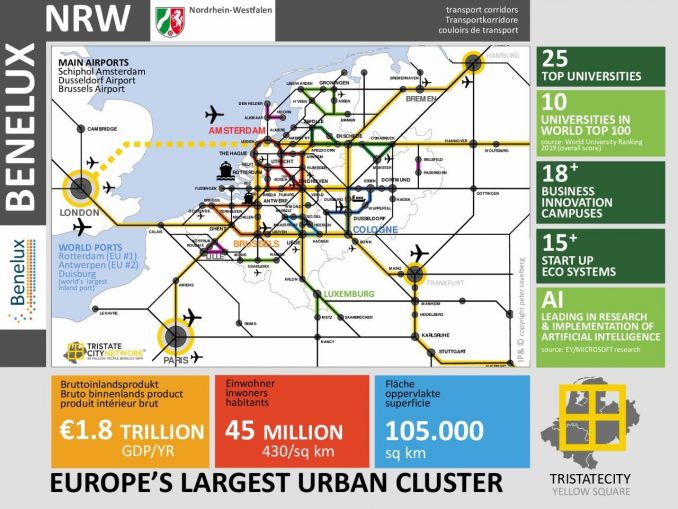 And how is that connectedness? The good road network and the many reciprocal commerce in the area serve this purpose. Savelberg: “Despite cultural differences or language barriers, the Dutch, Belgians and Germans have managed to find a way to reach out to each other for decades. These collaborations could be stimulated even more. Universities cooperate on European projects, but it would be good if this could be done in a more structured way.”

Savelberg sees there is still too much thought being given to city centres: “Plenty of research is being done in the field of health In Maastricht. This also applies to Utrecht, where it is referred to as ‘living health’ and Groningen as ‘ageing health’. Then I would say: look at what you can do as a network for healthcare. Let go of those city limits.”

That doesn’t mean we’re there yet. Even though the road network is in good shape, the railways could still use a major upgrade. Also, there aren’t as many trains between the Netherlands, Belgium and Germany as you would like for such a ‘cosmopolis’. Savelberg: “Prorail has estimated that it is possible to run many more trains one after the other. In order to make this happen, we need to invest in a more effective safety system. As well as more high-speed lines are needed to improve connections between areas.”

Savelberg: “We are facing major changes; rapid technical development, the rise of data, robotization and so on. It changes the economic order and changes companies that we are currently familiar with. Perhaps in a few years’ time, the manufacturing companies as we know them today will have changed into data companies. Who knows? We want to keep looking ahead, take the next steps towards growth. The network that you assemble around you plays an important role in this.”

The Space Week shows the social importance of space for…
Knowledge Sharing Centre ensures the transfer of essential…
Choosing a stance? Interpreting the geopolitical challenge…
Second phase Brainport Industries Campus will be even…
Maastricht has the most heat stress-resistant inner city in…
Talent and innovative power make Brabant's IT and data…
Manage Cookie Consent
We use cookies to optimize our website and our service. Help us to make our site better by accepting all cookies.
Manage options Manage services Manage vendors Read more about these purposes
View preferences
{title} {title} {title}