A group of economists from Austria, Germany, and France proposes an even more radical economic recovery program than the European Union. In their view, the EU recovery fund could be increased from the 750 billion euros proposed by the European Commission to as much as 2,000 billion euros. It should also be given a truly European face, in which the sustainability of energy supply and ultra-fast train connections play a major role.

The economists would like to earmark EUR 1.5 trillion between now and 2030 for the typically European goals. The remaining 500 billion are intended to combat the effects of COVID-19 at a national level.

According to the economists, we should have the same ambition in passenger and freight transport as the Chinese with their Belt-and-Road Initiative. Europe must work on its own European Silk Road. Particularly when it comes to train connections, there is still too much national thinking with systems that are poorly interconnected. Moreover, trains do not run fast enough to compete with airplanes.

Specifically, the economists propose four ultra-fast European railway lines with an average speed of between 250 and 300 kilometers per hour. One railway line takes you from Lisbon over Paris, Belgium, Berlin, and the Baltic States to Helsinki. This train could, for example, halve the journey time between Berlin and Paris to four hours. In Belgium, this route also splits off and makes a curve over the Netherlands, Hamburg, Copenhagen, and Stockholm to Helsinki. 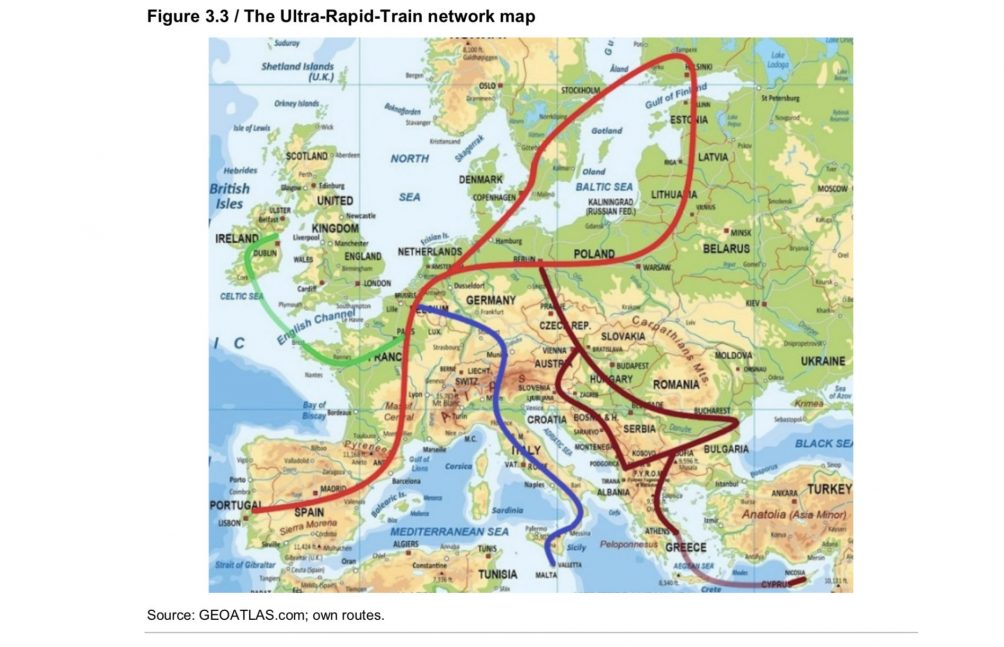 A second line is scheduled from Belgium over southern Germany to the southernmost tip of Italy and Malta. A third line focuses on the southeast of the EU and connects Berlin with cities such as Prague, Vienna, Ljubljana, Sarajevo, Podgorica, Sofia, Bucharest, Budapest, Zagreb, and Athens.

The plan connects all EU capitals. This also applies to Dublin, which would have a high-speed train-ferry connection with Paris. The economists arrive at a total cost of 1.1 trillion euros, which could, for example, be spread over two decades. To make the whole profitable, it would be good if one company – the “Ultra Rapid Train Trust” (URTT) – would become responsible.

According to economists, the same type of project should be considered for European goods transport. A combination of highways, rail, and shipping connections that also connect countries further afield in Eastern Europe. Think for example of Russia and Azerbaijan.

Making the EU CO2 neutral plays a key role in the economists’ plan. They would also like to see the electricity grids of northern and southern Europe extended and interconnected so that renewable energy sources such as water, sun, and wind can better complement each other.

Moreover, the economists believe that a genuine common project can promote a sense of European solidarity and trade.

Corona in Europe - Who will manage to get Omicron under…
Europe rivals the United States as a technological giant
'We need an OMT for energy,' all the more so since the…
European deal on climate took the European ministers until…
A wave machine that ultimately could deliver energy to…
Europe wants the best batteries in the world