Everything engaged in the circular economy has to come together in 040circular. That way, this platform, which is connected to futureproof.community, hopes to make it easier to connect supply and demand. A big fighter for the platform – which cooperates with MVO Netherlands – is Bas Luiting. He was the host today at the official start of 040circular.

For the occasion, Luiting called upon a series of showpieces from circular Eindhoven. They could tell their personal story, with the emphasis on their circular entrepreneurship. 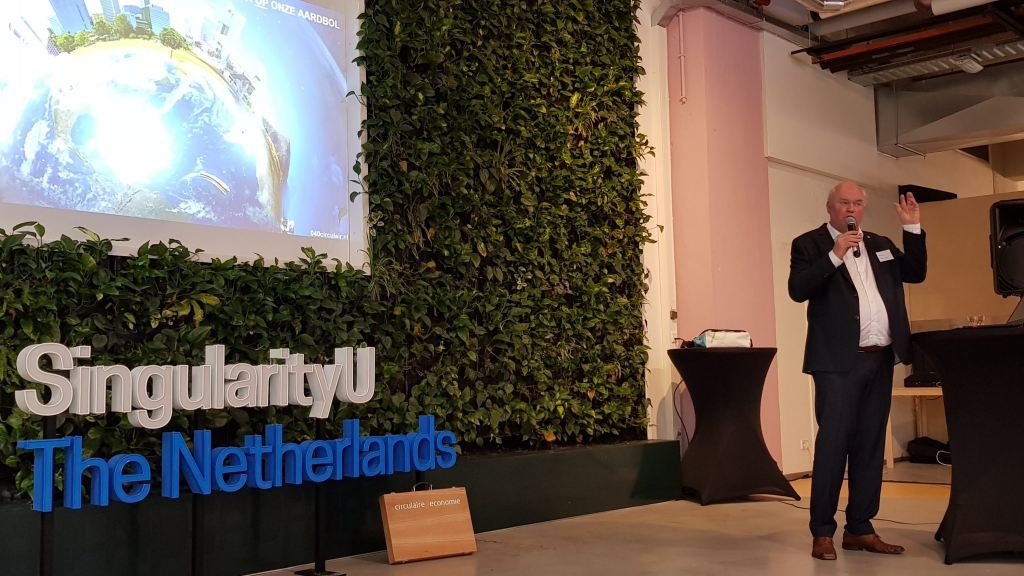 Tonnis Hooghoudt spoke about Ioniqa, which has now got a pilot factory in Rotterdam, where new raw materials are made from old PET-plastic. He has recently received the permission to use his new plastic for food. “Our bottles have officially been approved, a very important step. We can make high-quality plastic from plastic waste, which is better than recycling. The quality of the plastic isn’t affected by our process, so we’re ready for the next phase.” 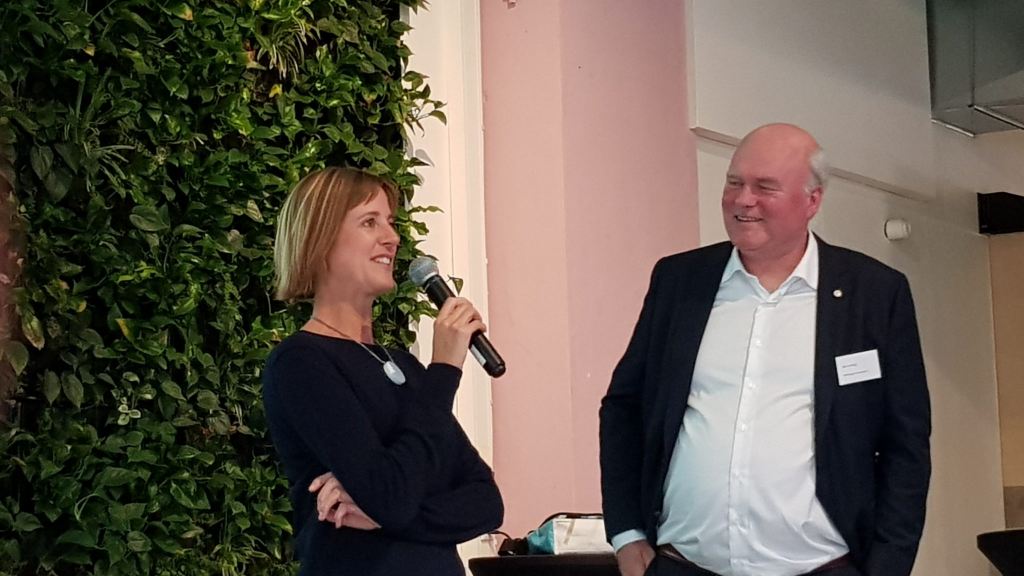 Lotte Douwes didn’t only show how China succeeded to make high-quality porcelain from the material of which half consists of old porcelain, but also how Overtreders W and Bureau SLA are building a pavilion on the Ketelhuisplein that entirely consists of collected plastic for the World Design Event (during Dutch Design Week).

Jos Hakkennes of the foundation Duurzame Kost (sustainable food) gave us a look into his inside farm in the Veem building, where he doesn’t only breed trout, but also lettuce. Thanks to a closed water circuit between the fish and the vegetables, he does that with 5% of the water that would normally be necessary for that. 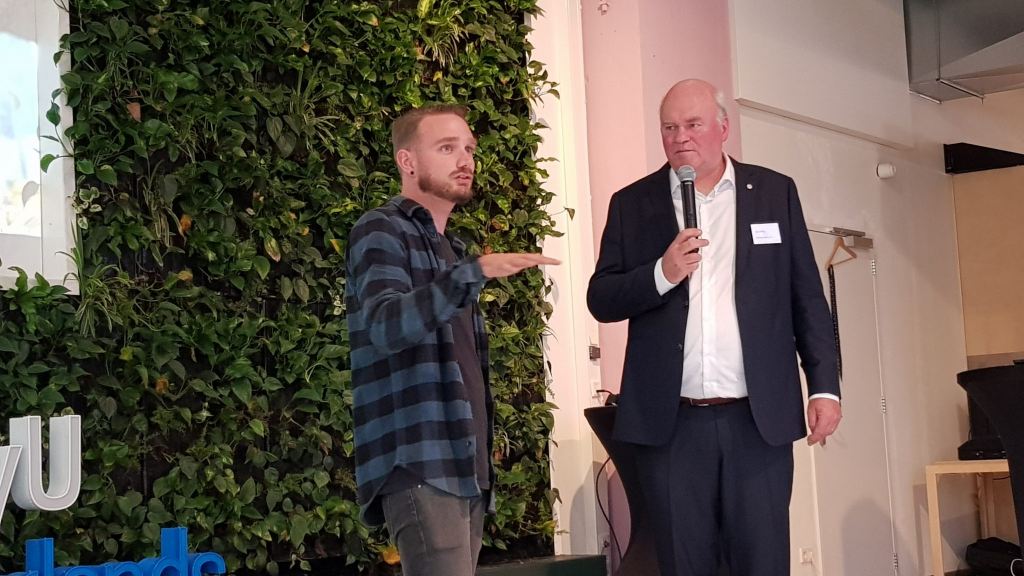 Wesley Nieuwenhuizen, graduated last year from the Design Academy, then showed how his graduation object (a driving kitchen for the reuse of plastic) has now become an educational project. “Initially, my teachers didn’t like it, we had to design products and this didn’t fit at all.” Because indeed, what would you do with such a refined travel sleeper? A bed with a kitchen on top, was that it? Nieuwenhuizen: “My first idea was a wink towards food trucks on festivals. I could already picture myself standing there, with my soup can and cotton candy machine that produced plastic. In the meantime I have made the shift to a younger generation, I give workshops about circular economy and the reuse of plastic. And fortunately, the teachers were also happy eventually.” 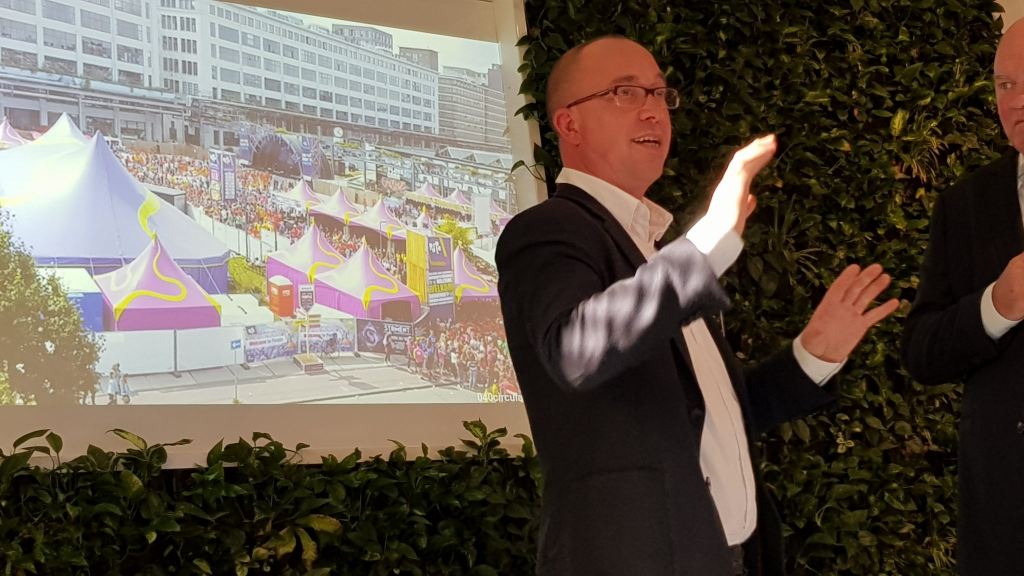 Fons Claessens, responsible for the minor circular economy at Fontys and columnist at E52, didn’t only tell about the importance of education in this subject, but also about the economic opportunities that arise because of it. “It is a job generator.” His students Mark Valkenburg, Goof Rutten and Florian Tournicourt highlighted that. Claessens: “In a linear economy, it’s about making money. But after that, the product has become waste and we pass on the external costs to the society. But now, these kinds of costs are internalized. Say you’re selling chairs, you make sure those chairs have the best quality because if they break, you’re responsible. That’s the difference between producing as cheaply as possible (in China) and producing as well as possible (here): reshoring.” 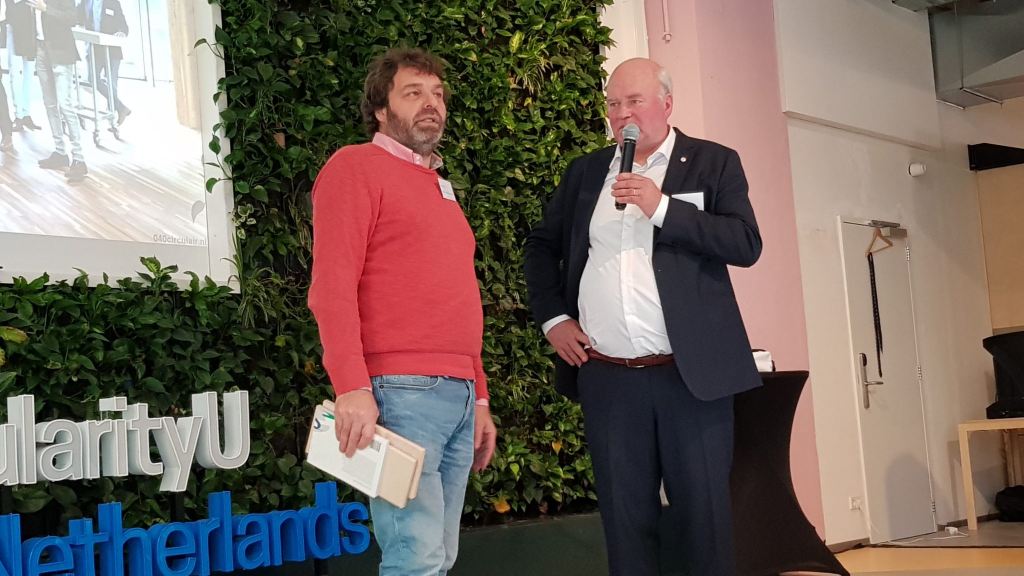 The examples that Rik Ruigrok from Herso BV gave about the business he has made from a circular thought were also interesting. Without ever buying new raw materials, he can give his clients what they ask him. Like with the “upcycled” wooden floor he could make for the ABN AMRO Circular Pavilion in Amsterdam. “So who’s wondering whether there are orders coming from the circular economy, can see here that that’s not the case.” Not everything went automatically, he noticed. “I am for example fsc-certified, but what does that mean if you know that the “f” stands for forest? I don’t harvest in a forest but in the city. I don’t chop down a tree. In fact, I don’t buy anything.” The fact that Ruigrok is going big, is apparent from the request he makes on the spot. “Does anyone know where I can find 2000 tons of sawdust or 2000 tons of wood shavings? The ideal raw material for lactic acid.” 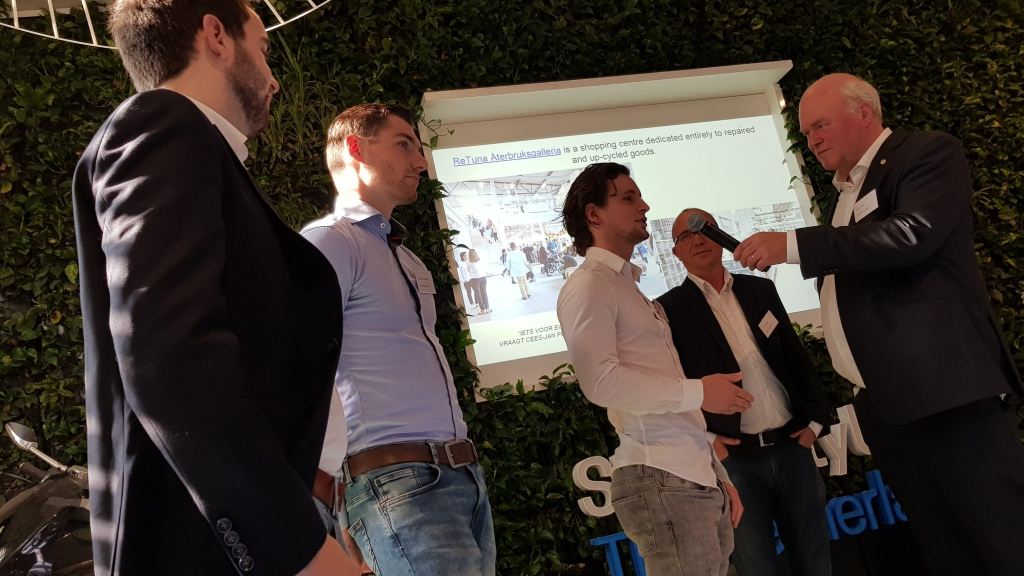 Finally, Tim Kouthoofd of Bygg architects could tell about the circular buildings he is building together with Bas Luiting. Plug-In City – in the heart of Strijp-S – is an example of them, but Kouthoofd is currently preparing the placement of vertical containers, for example as student housing. “Containers offer opportunities. In the eyes of many, it is a waste product from the logistics; they came from China but stayed behind here. You can refurbish them, which is already being done here and there. Our idea is to put them on their side. That gives it more uses, as temporary event spaces for example, moveable with catering and such. But also as a two-story house. Sustainable, reused and a business model. A tiny house for students.” The first vertical container will open on October 10th, on the day of sustainability, Kouthoofd promises. 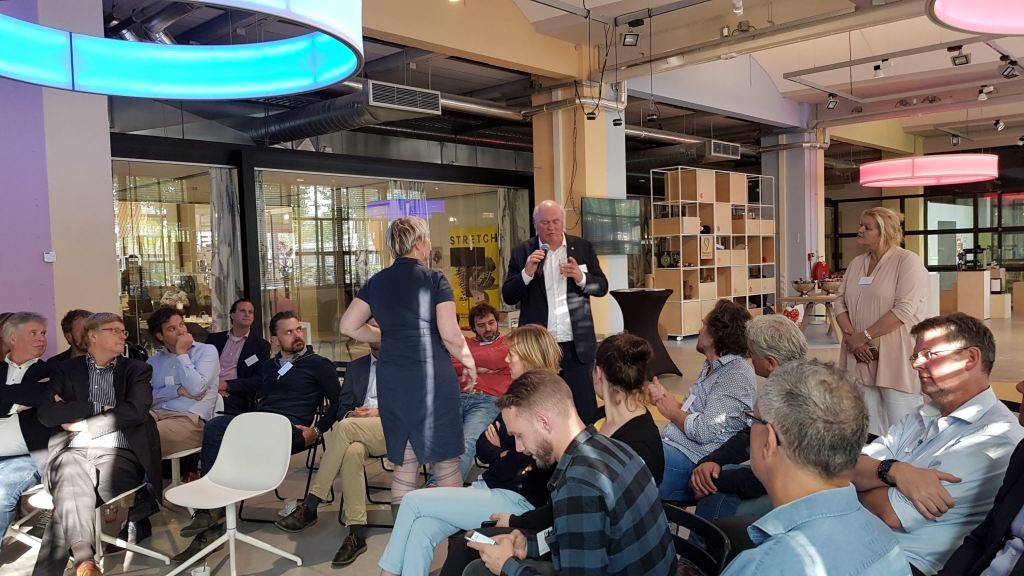 At the end of the meeting, Eindhoven’s example entrepreneurs also turned out to be the most active circular matchmakers. Led by José van der Klauw, manager knowledge and development of MVO Netherlands, a circular economy student could get an internship in no time and new customer was found for a portion of the 22 tons of circularly bred lettuce. Unfortunately, there wasn’t yet a supplier of 2000 tons of short-fiber sawdust, which are necessary for Ruigrok’s circular project. But that might also just get solved, an employee of De Meeuw from Oirschot said on the spot.

In the meantime, Luiting was enjoying the lively interaction on his event, and on the new platform. “There are already a lot of solutions on it. But you know how that goes: solution-based publication also raises another question. And with that a new challenge. We’ll have our hands full for some time.” He’s totally happy with the nomination of “his” Plug-In City for the ABN AMRO Circular Economy Awards / Best circular work environment in the Netherlands. There are 18 competitors for the title, it will be decided on November 2nd.

Futureproof.community and 040circular are solving sustainable entrepreneurship issues by bringing supply and demand together on the matchmaking platform. That way you get access to solutions for your issue or to entrepreneurs who can benefit from your product or service. The use of the community is free for entrepreneurs.