February 4 is World Cancer Day that takes place annually to unite people, communities and institutions in the global fight against cancer, to raise awareness and to educate about cancer. Researchers are continuously looking for ways to establish new viable cancer treatments. Here are the stories about three innovative approaches to anti-cancer therapy that are likely to change the ways cancer is treated in the future.

“Our immune system is so powerful and so important that if you don’t have it you will just die within weeks,” says Wilfred Germeraad, the CSO of CiMaas, based in Maastricht. “We know how the immune system fights viral infections or bacterial disease, both caused by invaders from the outside world. It may be working, in the same way, fighting cancer coming from the inside. The immune system is our natural defence mechanism, it is not something external like chemo- or radiotherapy in treating cancer. The body endures it naturally, compared to toxic substances from the outside. By modulating, modifying and improving the immune system you may have a better chance that the treatment can be far more specific and thus reduce side effects.”

“By modulating, modifying and improving the immune system you may have a better chance that the treatment can be far more specific and thus reduce side effects.”

The first product is a dendritic cells vaccine. Dendritic cells are the ‘sentinels’ of the immune system responsible for the initiation of immune responses. Dendritic cells are present in those locations of our body where they can find danger: pathogens that come from the outside world but also danger from inside – cancer cells. Dendritic cells “recognize” danger molecules and pathogens by patterns and then modify and activate the immune system. “In our research, we have been looking for the ways to mimic the outside world danger to the dendritic cells: what kind of danger signals can we give to DC so that they will start a very strong immune response? We found a combination of bacterial cell wall components, together with a chemical compound and the cytokine Interferon-gamma is the best stimulator,“ says Germeraad. “That combination activates dendritic cells in such a way that they activate all other effector cells of the immune system: T helper cells, natural killer cells and T killer cells – resulting in the great killing of cancer cells in the lab. So, the next step for us is to try that on actual patients.’’

CiMaas started their research on dendritic cells using human cells in vitro when they were still a university research group. Now their product is at such a stage of development it is almost ready for testing in patients. “We really want to bring our products to patients, that is why we started CiMaas,” says the CSO of CiMaas. “Now our start-up is 4 years old and we have the facilities and the equipment that meet the strict requirements for the production of the vaccine. We have started the process with the European Medicines Agency to obtain the regulatory approval. Currently, we are focusing on this goal. We expect that next year we can try the dendritic cells vaccine on patients.” 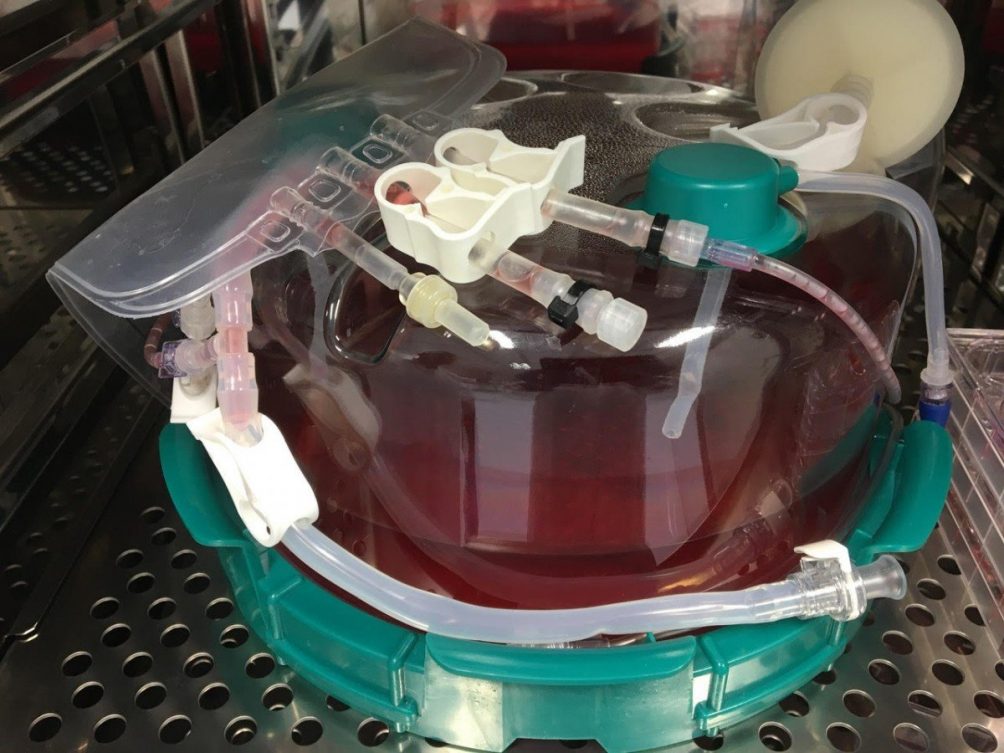 After the first 10 days of cultivation in the first machine (top picture), cells are transferred to the bioreactor in the second picture containing 5 litres of a medium in which 3 x 10E10 can grow.

Natural Killer cells for the haploidentical therapy are taken from a donor to a recipient. As Wilfred Germeraad says, the haploidentical mismatch between the donor and a recipient activates the NK cells resulting in the killing of the tumour cells. Just before Christmas of 2018, CiMaas had reached their goals for setting up the system for the natural killer cells therapy and had produced 30 billion of NK cells – enough for a treatment cycle of one patient. Now, when CiMaas has established their system for the production of natural killer cells, it can be expanded further. The startup expects to start the clinical trials of natural killer cells therapy early next year when regulatory approval is obtained.

Main Photo: the machine (closed system) in which isolation and cultivation of Natural Killer cells occur. The moment in time shows the influx of full blood into the first separation step that occurs in the chamber in the lower left of the machine.