“What kind of city do we want to be?” urban developer Eva de Klerk opens her keynote speech on Thursday evening during the Munich evening of the urban festival We make the city in Amsterdam. According to her, city dwellers all over the world are increasingly dissatisfied with mass tourism and other money-driven developments in which the construction of each square meter of space stifles any creativity. Above all, she wants to make it clear that cities do not have to be powerless in the face of such developments. “The answer is resident participation and localisme.”

Using a bottom-up approach, De Klerk gained fame by developing the NDSM shipyard in Amsterdam North into one of the largest, longest-standing and best-known breeding grounds for artists in the world. Not on her own, but together with the users. 250 city residents now work in about 85 studios: a mix of artists, designers, creatives and craftspeople. The project was such a success, that De Klerk’s expertise is now being called upon all over the world. “Nowadays I’m working for Volkswagen in Tokyo, in Seoul and at the old Berlin Tempelhof airport. I notice how everywhere there is a shift towards resident participation.”
In her lecture, De Klerk shows that resident participation, contrary to what the concept might suggest, is not a vague and disorganized process. “The collective is setting the course, although the process must be well documented. Transparency is very important, also in the field of finance, because you want to avoid there being too much outside influence.” 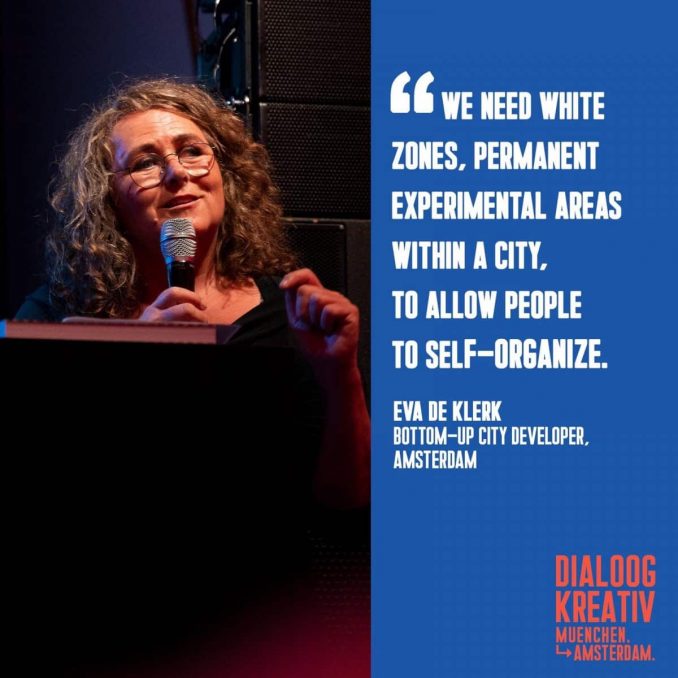 Not a fashion fad

She warns that participation projects should not just be another fashion fad. “City councils still seem to see these as experiments. To that I say: they are a real alternative to market forces. If you want to see it as an experiment, see it as a permanent experiment. Cities need community spaces where residents are able to organize themselves.”
In an appeal to the well-represented city councils of Amsterdam and the host city of Munich, De Klerk calls for the inclusion of more participation by residents. “It seems improbable, but it’s not inconceivable. 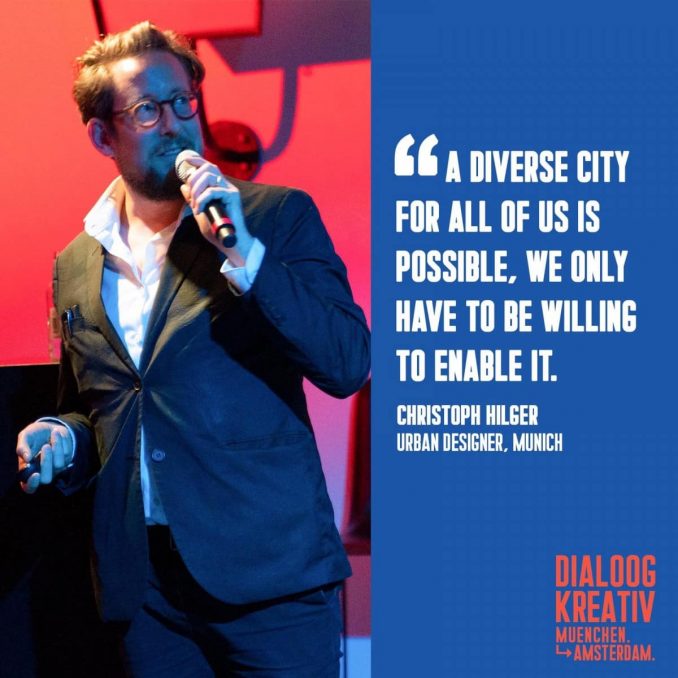 The second keynote speaker of the evening is Christoph Hilger, an architect from Munich. He talks about how difficult it is to make everyone happy when it comes to urban development. As an example, he names three Hans’s, hypothetical models of the Bavarian capital’s residents. The first Hans is a typical Bavarian in traditional costume, who goes to Oktoberfest and loves the traditional architecture. The second Hans loves modern architecture, and is married to a man. The third Hans has converted to Islam and is a member of a motorcycle club together with his friends. Hilger’s message is: “Munich must be open-minded. A city for everyone is possible, but the city must make it possible.”

Aside from urban development, the evening is also about trying to make the city more sustainable. The host city of Munich has brought with it a selection of companies that have been asked to give a pitch. A good example of this is the start-up Greenstyle, which brings sustainable fashion designers together under one roof. Like Amsterdam, Munich has to contend with a congested city center and stricter European air quality standards. And just as in the Netherlands, the proliferation of parcel service providers in smelly diesel vans is of major concern to Germany. Peter Blösl, Munich’s manager of UPS (the largest and longest-running delivery service in the world), explained how his company is trying to deal with these problems. Germany may be known as a nation of carsy, yet Munich, Blösl states: “Is the bicycle capital of Germany. Just like in Amsterdam, we are talking about making the city center car-free, but for the time being this seems a bit of a radical solution. I’d rather talk about a car-reduced city.”

According to Blösl, everyone in Germany agrees on the need to speed up development. UPS is doing its bit with a bicycle courier service which has 24 full-time cyclists, making it currently the largest UPS location to do so in the world. “This gets rid of more than 500 stops per day. In addition to reducing environmental pollution, it also creates a more positive image. They refer to package missiles in Munich when they talk about UPS. Of course, for the outside world, Germany remains the Land of BMW and Audi, while Amsterdam is still the City of Bicycles. Tomorrow I am off to our offices in Amsterdam and Utrecht to explain how to set it up.”

‘We make the city’ urban festival lasts until Sunday. See here for the whole program and here for the input from Munich.

From vertical farms to parcel collection: the 'neighborhood…
Do we want facial recognition in public spaces?
'The best scientists also have start-ups'
'Anything you don't tear down, you won't have to build all…
Dutch Technology Festival brings top of Gaming & Esports to…
Combatting poverty and debt with the help of Artificial…