Start-ups face challenges on many different levels and it’s the ultimate balancing game. You need to have a team in order to deliver your proposal. And in order to get a team, you need funding, and in order to get funding you need … well a team that is able to deliver your proof of concept. So it’s a vicious circle that’s got to give somewhere. In the early phases of a start-up, this cycle is often cut short by individuals that take a personal risk to make it work: angel investors. They believe in the team and the idea and are willing to make real commitments instead of merely offering support or mentorship.

At Lightyear we have been grateful to have received the support of these angels. We were able to build the company and form a fantastic team of highly skilled A-players that managed to deliver the first proof of our proposal last summer. They built our first motorized prototype, with a quality that led many industry veterans to compliment us on it. “Better quality than most prototypes I have seen from other car manufacturers”.

Now the next major challenge is to go beyond a prototype to delivering our first cars to our customers. The time to market is one of the most important metrics for a start-up.

In order to really address climate change problems, we need to think big. By introducing a new system (solar cars) instead of optimizing old systems (hybrids) or only partially converting our old system (electrifying existing models), we will be able to achieve a much greater positive impact in the end.

Looking at the figures from Weterings et al you see where the challenges lie: it takes more time to do this. Generally, this is due to the parallel development that would be needed to design a new integrated, optimized system instead of merely optimizing some components of an old system.

In this high-risk, high-gain game of technology development we’ve found that the rules in Europe and the US are quite different. In Europe, this phase is usually supported by all kinds of subsidies, credits and/or loans. In order to acquire these, you need to write extensive applications and go through various evaluation rounds while at the same time the world is continually changing. In addition to that, these applications mostly apply to only a specific part within the development process. As a consequence you need to stack a lot of smaller applications together, making it unable to take a big leap and accelerate the whole process.

Lightyear One was home

Although we have always been aware of the lack of a ‘risk appetite’ in Europe, I am really struck by the difference between the mindset here and in the US. In the past 3 weeks I was part of the team that took our first prototype to many different places around Silicon Valley. It felt like Lightyear One was home: the climate suits the car and the positivism and ‘think big’ mindset even more so. What a difference when it comes to the conversations that we’re having here. It felt a bit liberating, as sometimes here in Europe we are forced by the system to be too conservative and take one overly small step at a time, slowing down our time to market. Which results in the risk that failure might become a self-fulfilling prophecy. 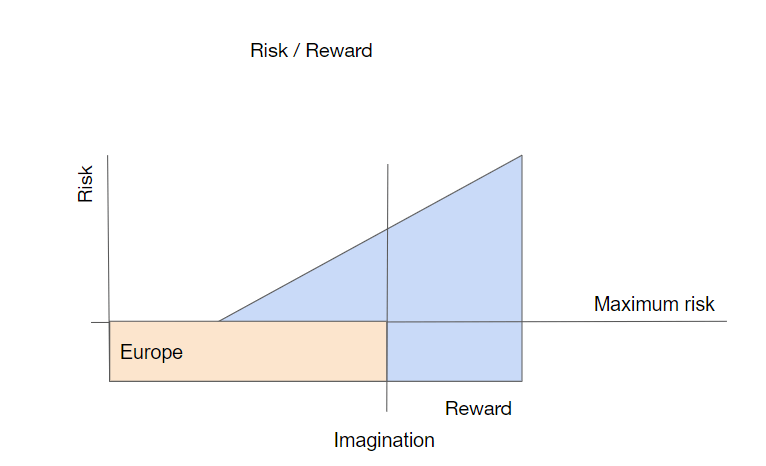 Up until now Lightyear has been able to attract ± €35M in funding. More than half of this funding is from sources outside our own country and only a little over 5% of this funding is coming directly out of governmental channels. Although there are signs of new initiatives on the way that would solve a part of this problem in the near future, at this point I completely agree with John Jorritsma that we need structural instead of incidental solutions. Without more risk-friendly capital in the Netherlands, we are not only limiting the growth of our own ecosystem but also risk losing returns to those that are willing to take on the gamble. The Netherlands is a wonderful and strong country, with many bright people, great innovations, and strong industries. If we want to harvest the true potential of it, we need to improve our funding landscape by adding a little bit of an American mindset to it. Go big or go home.