Last week there was a lot of hassle about the insecurity of electric bicycles, especially for older cyclists. 87 percent of road deaths on an e-bike are persons of 60 years or older.

The shift from traffic casualties of the classic victim group, the self-reliant young male driver, to the older cyclist has been visible for a long time, as shown in the following table from a study by the SWOV (Foundation for Scientific Research on Traffic Safety). Which also shows how quickly driving has become safer in the last decades. 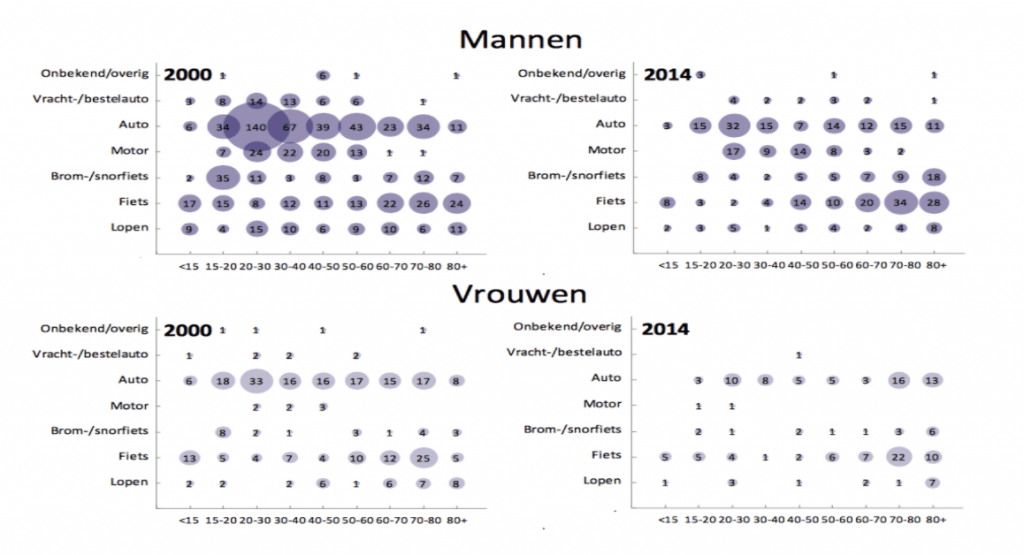 There are a few factors to place these numbers in context. First and above all, older people are cycling more than ever before, especially due to the rise of the electric bicycle. Between 2000 and 2014 there was an increase of approximately four to five times the distance traveled by people over 70. The number of victims has grown slower than that, indicating that other security enhancement measures seem to have an effect, especially in the infrastructure with more and wider cycle paths, more and more separated from the main roadway, and “forgiving” circumstances.

And then there is another unconfirmed suspicion that many elderly people will die due to a natural cause, but at the moment, just happened to be sitting on a bike. The chance of dying during mild exercise is always slightly larger than when you are sitting behind the geraniums. A beautiful death, it seems to me, but nonetheless, it is recorded as a fatal accident.

But what I’m worried about is the steadfastly rising call for obligatory helmets, which was recently pronounced again by Officer Van Hasselt of the National Police. And I am opposed to that. A helmet obligation leads to significantly fewer cyclists on the road, because of lacking comfort, hairstyles, and vanity. This would cause more misery than it dissolves. Certainly for the elderly, who stay healthier by cycling, and are experiencing a lot of happiness in their refound mobility.

And it does not always lead to the desired effect. A helmet obligation came into effect in New South Wales in Australia last year and after six months the first proud reports came out stating that there were six to seven percent fewer victims to regret. Until someone calculated that there were more than ten percent less cycling kilometers, so cycling actually became more dangerous. Of course, this is partly due to the short period of measuring, but it is known that fewer cyclists can also have a negative impact on safety. Because the more cyclists, the more the other traffic will take account of it, and the faster the infrastructure will be changed to benefit cyclists.

Finally, as long as you do not talk about speedpedelecs or racing cycles, there is only a limited number of accidents where a helmet would really have helped. Sure, those limited numbers can still be found important enough, but then again, if you think like that, there should also be a helmet obligation for car drivers.

But above all, I think that something is fundamentally wrong if you point to the cyclist as the cause of the problem, whereas it is the cyclist who already helps society a lot, just by cycling. Adjustments to infrastructure would be much more effective than a helmet. It’s like when there is a sniper in your area, and the government gives everyone a bulletproof vest instead of trying to turn off the sniper.

So let’s be proud of our huge helmetless bicycle army, foreigners are watching it with growing jealousy. And let’s learn to control our reflex to strive for a flawless and risk-free life, wrapped in bubbly plastic. “It is impossible to live without failing at something unless you live so cautiously that you might as well have not lived at all” (JK Rowling). Amen.