Brainport is known as a world player in the high-tech hardware. Look at ASML, what else would you call those immensely complicated machines that come from there? Yet there is more than meets the eye: without the 45 million code lines behind it, the devices are incapable of anything. The same goes for the automotive industry, for the MedTech and so on. Brainport Eindhoven may be a hardware region, developed thanks to the manufacturing industry, but the importance and the role of software becomes clearer every day. As “embedded software” it makes sure that all the makers can actually produce devices with a real function. And that importance will only increase the coming time.

New challenges around artificial intelligence, deep learning, big data, the blockchain, cloud services and new safety requirements in the internet-of-things are causing a growing independence of software experts. It was about time that especially those five to ten thousand software developers lodging in the region, would develop into a true and close community, so Martijn Rutten and Klaas van Gend found. Together they started 040coders through meetup: a platform for the exchange of experiences and knowledge, but also for a better knowledge about each other and each other’s activities. Once a month, there is a meeting at a software related company (“No recruiters or other tie-wearing persons allowed!“) so that the network can also grow just a bit faster.

“This region can join the top of the world and yet there is something missing. With a better exchange of knowledge and experiences we can fix that.”Martijn Rutten, 040Coders 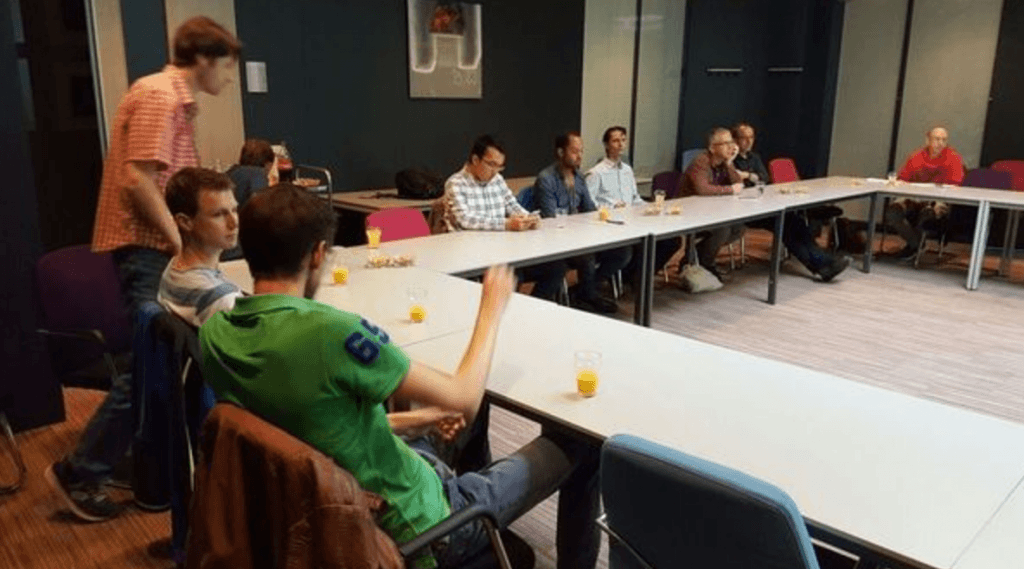 Where their initiative will eventually lead, Rutten and Van Gend don’t know yet. But that it is necessary, they know all the more. Rutten: “Traditionally, code was – if it was even there – written by domain experts, the people who especially had expertise around the hardware. But that is no longer tenable. You won’t only not make it anymore with roughly 10.000 code lines because a little bit of intelligence in your machine soon requires millions of lines. But besides, it has all become many times more complex. And you might be a really good physicist or electrical engineer, you’re no longer capable of solving the corresponding software challenge. Not to mention the continuously necessary updates of the code: a computer or a car, which has actually also just become a computer, can no longer wait for the next service for a software update, it just needs to be done constantly.”

In other words: besides the domain experts, computer scientist are becoming more important, technically as well as in terms of processing. Without such expertise, nobody at ASML knows how those 45 million code lines (“all heritage of more than fifteen years of development”) can be understood and managed.

040coders wasn’t only created because Van Gend and Rutten just happened to find this so important, but their frustration about the untapped potential in this area did play a part. “I cannot deny that”, says Martijn Rutten. “But more importantly of course, in this region there is a huge amount of knowledge in this field. We can join the top of the world and yet there is something missing. With a better exchange of knowledge and experiences, we can fix that.”

Van Gend compares Brainport with other tech regions. “Silicon Valley and München immediately come to mind. München is very closed, vertically organized, with employees who are often permanent employees at a company. Compared to that we are a few steps further: we have a much better work mobility – every technical company has a number of freelancers or home-workers who rotate more often than the permanent employees, thus creating more knowledge exchange. But when you look at Silicon Valley, we still have a long way to go. The community of software engineers is so strong, that there has come a natural exchange of knowledge and ideas from which we can learn a lot. I recently spoke to a software developer because I wanted him to give a presentation for 040coders, but his response was that he was going to have to ask his manager that first. That says enough, it seems to me.”

040coders has to help establish that community and with that push Eindhoven further up, “even if it’s only a little bit”. Because if one thing is clear to Van Gend and Rutten, it is that software will only become more extensive and complicated the coming years – and that there will be an even bigger need for good programmers. “The number of lines per head must go up”, knows Rutten for sure. But that’s not enough yet. “There will also need to be more cross-pollination with related specialists.”

Even though the meetings of 040coders are “tie-free”, Rutten and Van Gend do see the importance of connection with the software CEOs who have joined in the High Tech Software Cluster. “Ultimately, of course, we have the same interest.” For 040coders it can now go all ways. From some participant, there was the request to offer workshops. “That is something we really have to think about”, says Van Gend. But the added value might come from a totally different side in the long run. Rutten: “I can imagine that at one point a large German car manufacturer can use the 040coders-community for the solution of an acute problem in his business.”

The first meeting of 040coders was mid May at Thermo Fisher Scientific (formerly known as FEI) and it attracted over 20 interested parties. The next one will be on June 15th at Holst Centre (High Tech Campus), with the central theme Test Driven Software Development. There will be speakers from Sogeti and Tomtom. Sign up on meetup, but leave your tie at home.