“Dutch people are really generous with the time they spend on teaching us their language and I am really grateful for that”
When I go to Fight like a Woman or other Expat Spouses Initiative meetings, read expat spouses’ blogs or meet them in the Taalcafe I realize that for most women coming to Eindhoven to their partners finding their place in the Dutch society is not an easy task. They have to learn a new language, to find a job, to establish new social connections – to start almost everything in their life from scratch. Learning Dutch might be challenging if it is not spoken by at home. Finding a job is yet another problem because most frequently it involves a complete self-reinvention as a professional. All in all, integration into Dutch (and in any other) society is normally a long and difficult process and for internationals who come through it, it is not unusual to experience feelings of frustration and uncertainty. But for Laura Alvarado, who agreed to share her experience of life as an expat partner, it seems not to be the case.

I meet Laura in her house. We sit in the sunlit living room, filled with the warm smell of citrus fragrance oils and coffee. What immediately catches my eye in the interior is the accurate mosaic portrait of Laura, which turns out to be made of Lego pieces, at a closer look. Laura smiles a lot as she talks and seems to be as sunny as the country of her origin – Mexico. She is a newcomer in Eindhoven – Laura has been living here only for four months – but with her language learning enthusiasm and an ability to take the initiative and she has already done some key things which make one feel more at home in a new country.

I heard Laura talking in a very confident Dutch at the speaking class and could not help being surprised by it. Being an international myself, I am curious about how she managed to reach this impressive level of language proficiency in such a short period of time. Laura gladly shares her learning techniques: “What you need to do for learning a language is to find something that you really like and do it in that language. For example, I was a music teacher, so for me, music is very special. I think for the first two months that I lived here I only listened to Dutch songs.”

“What you need to do for learning a language is to find something that you really like and do it in that language.”Laura Alvaredo, from Mexico 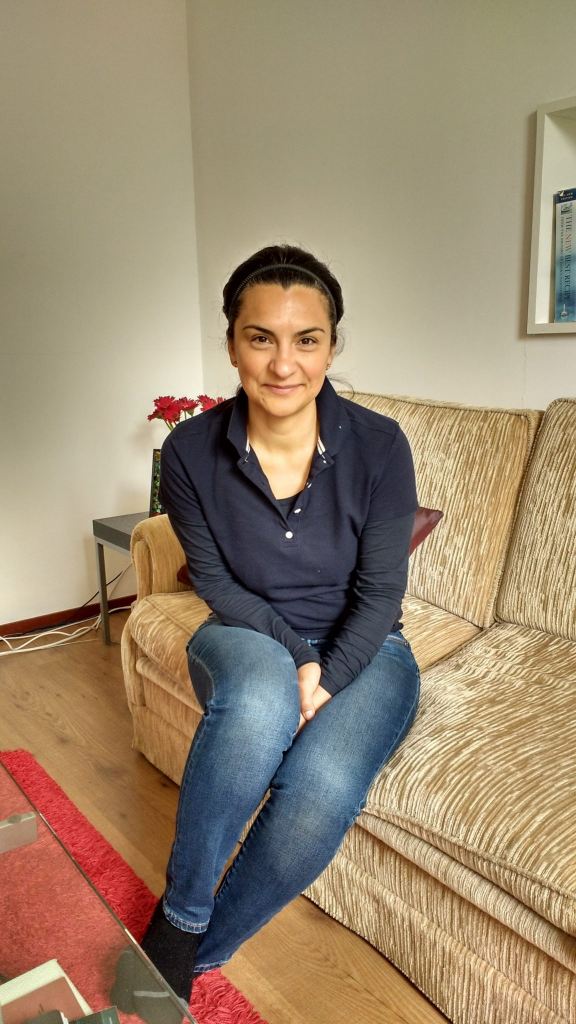 Laura also goes to a course delivered by the volunteer teachers. She says that she was really surprised that so many people in Eindhoven volunteer to help immigrants to learn Dutch. “I think that without saying it, Dutch community shows you that they want you to belong to it – and with the language, too. So my impression is that Dutch people are really generous with the time they spend on teaching and I am really grateful for that”. Additionally, Laura found the possibility of learning Dutch using a tandem method – a learning method based on language exchange between speakers of different languages. Tandem Project Eindhoven was started by expats willing to share the knowledge of their native languages with people of Eindhoven in exchange for being taught Dutch. The benefits of tandem learning are that it is self-organized, it provides lots of cultural knowledge, it is personal and it is free.

In the Tandem project, Laura has started meeting a Dutch girl who wants to learn Spanish from a native speaker. As Laura describes their lessons: “It’s a conversation with your tandem-partner and it comes naturally.” She finds tandem lessons very helpful for learning. “It has been really nice to have someone local to speak to you. It’s like a private lesson of culture and language. We speak half of the time in Spanish and half of the time in Dutch. And what has been really great is that my tandem-partner is from here, from Noord-Brabant. So she has taught me some special words which are used only in this area. For example, kǔkske – instead of a koekje. Yesterday I went to the store and I used them there – I went to have some coffee and a kǔkske. The people in the store were really excited because I was speaking Dutch and using local words.”

Two months ago Laura got her first job in the Netherlands as a postbezorger. As she confesses, applying for a vacancy in the post-delivery was an experiment – she wanted to challenge herself to come out of the bubble and to test her ability to communicate in Dutch. “It was easy to apply because I could do it online. But then they asked me to do a phone interview. On the phone, I did not understand many things and I was saying Kunt u langzamer spreken alstublieft. But they were very nice and talked to me and said that I would have an interview in person!

In the group interviews, people were asking their questions in Dutch – I couldn’t understand them. But then we had individual interviews, which were much better. And in the end, I was told that they were giving me the job!” That all was surprising to Laura and difficult in many ways because she was not emotionally prepared to have a job at that point. As she recollects: “I came here thinking I would have no work for years until my Dutch is ready!” Now she realizes it was a wrong idea. She recommends expats like us not to rely only on their self-evaluation of Dutch proficiency when they are looking for a job. “Many people say they would like to look for a job but their Dutch is not good enough. What I want to say is that it’s going to be a long time till you feel that your Dutch is really good. You should start applying for it now and let the employer decide if your knowledge of Dutch is good enough for the job.”

Laura says that no matter how surprising it is for her to get her job in the post-delivery, which is so much different from what she did back in Mexico, she enjoys it greatly. “Now I cannot think of not having it. I like that I have something to do, I like that I am exchanging with people from here, I am earning money now. I like that I am a productive part of the Dutch life! ” Isn’t it called being well-integrated into the society?

Now, four months after her arrival to the Netherlands, Laura is reflecting on the progress she has made since she came here. “I see integration through language and culture as Lego pieces, look, like this one (pointing at her portrait made of Lego on the shelf). Four months ago for me most of it was black. And when you start to understand the words, you start seeing colours. So what I was thinking yesterday, it’s so nice that now I can recognize more, I understand more and it makes a huge difference – now that picture is colourful!”

Denmark is building a fuel cell factory that offers 90% efficiency