StudyPortals is growing out of their current office at ‘het Glasgebouw’ at Strijp-S. The company that helps students with finding a study abroad, is moving to the new location in January next year. Edwin van Rest is one of the founders of StudyPortals. He talks about his ambitions and about the new office. “What’s the coolest building in Eindhoven? Of course it’s ‘Het Klokgebouw’. The construction workers are doing a great job on the top floor of the building, when it’s done this will be the coolest office in Amsterdam. Only it’s located in Eindhoven.”

The main goal of the company is to make education choice transparent, globally. “Back in the days you went to the same university as your dad, or sometimes a friend told you about a good university. It was quite difficult to get a good overview of what and where to study. Of course when the internet came in our lifes it became a bit easier, but when you look at the websites of universities”, van Rest disapprovingly nods with his head. “That’s really a muddle of information. Good luck getting through that.” 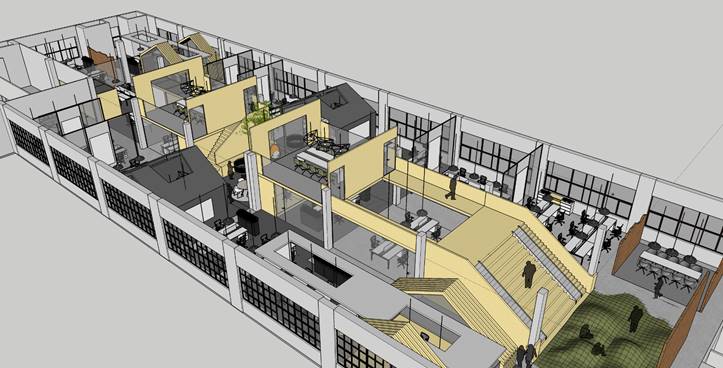 StudyPortals works with a team of 86 people in Eindhoven, a very diverse team with 31 different nationalities. “This year we hired 65 new people. People from Romania, the USA, Australia and England. So yes, we can use the extra space of the new office.” With offices in Melbourne, Bucharest, Manchester and Boston the company is growing fast. As many as 15 million people worldwide are using Studyportals to find an education every year. In June Studyportals also won the EdTechXGlobal Award, an important award in the tech education-sector. But van Rest is convinced that the company can still grow.

Making students better
“Our main goal is to take students further and to make their lifes better. We want to show them the possibilities of international studies, worldwide. Over the first five years we focused mainly on Europe. After just one year we had about 70 of the best universities and we could count on the support of the European Commission. From that moment on, everything went faster. In 2012 we had the 500 best universities of Europe aboard. Currently we have 67 countries were students can go to for an education. We even help students from Cameroon. One time a letter of the university had to be sent to a local post office because there was no home address. Helping this group with an education makes me proud. Especially in the US we can show big growth. Every year universities print 3 billion dollar’s worth of brochures, the most of these magazines go straightly into the bin. It’s such an old-school way of luring students to your university, and it simply doesn’t work. At our portals the overview is way better and it’s uncomplicated.”

Japan
Van Rest studied a year in Japan and he believes that everyone – “even if it’s for just one year”- should study abroad. “It’s an extremely educational experience. You have to adapt to a completely new environment. The language and the culture are different. You’ll get a richer person and then of course I’m not talking about money. You’ll learn to think different, there’s not one way for doing things right. After an adventure abroad you are much more open to the body of thought of other people.”

China and the US
“Take a look what China and the United States are doing”, Van Rest emphasises. “The 100k strong programme is an exchange project between Chinese and American universities, thousands of students gain experiences in each other’s country. But it’s way more than that. It’s a tool to actually prevent war. Because when there are enough Chinese people that understand Americans and vice versa, it’s possible to have a dialogue. I strongly believe in this strategy. People are more tolerant when they encounter different cultures. I think this makes the world a bit better.”

Back in the Netherlands
After his year in Japan van Rest want to share his experience in the Netherlands. He notices that most of his fellow students know nothing about the opportunities to study abroad. “That was at the same time as the Bologna process. The Bachelor and Master were two separate things. Before the introduction of the Bologna process you studied for five years at the same university, but when this new rule was introduced it was suddenly possible to do your Master’s at another university. This all brought a lot of new opportunities. The only thing was lacking was the information, so I decided to start Mastersportal, together with Thijs Putman and Magnus Olsson.

There still is a lack of awareness among students. “In the Netherlands for example they don’t know that the institutional fees are almost nothing in Belgium and Scandinavia. We want to show them that there are a lot more options than they think.” Students who use StudyPortals are encouraged to write a review about their education and about the country they live in. In this way StudyPortals hopes to lower the barriers for new students. “We notice that students are finding it difficult to make the step to study abroad. It has to do a lot with self-confidence. They’re wondering if they are capable enough. If someone from India wants to come to live and study in Eindhoven, he can read reviews and in this way he learns from the experiences of other people. This will help them to actually take the leap.”