Today is part 8 of our series on the Eindhoven Start-ups to Watch. Utomik is the platform offering users unlimited gaming for ten dollars a month. We’re talking to CEO Doki Tops about finding the focus for his company and the key question that everyone should ask themselves on a regular basis: “What is the greatest, biggest or smartest thing that you would do if money were no object?”

The interview starts behind a huge computer screen in an office on Paradijslaan in Eindhoven. The ominous images from Darksiders II appear on screen. Doki Tops looks satisfied. Within a few seconds, the classic game starts up, which is just what they want to see at Utomik. This start-up must become a platform for unlimited, easy-to-use and, above all, fast gaming opportunities.

Are you a big gamer?

“I’ve been gaming for as long as I can remember. I’ve even been developing games since I was thirteen, that is, together with Chris van der Linden (one of the co-founders). We started our first company from out of our student house in 2005. Initially we focused on the development of the games above all else, then later on selling the technology that was needed to make the games, and on the distribution.”

The jury said that your platform had the potential to become the Spotify of gaming. Is that a good comparison?

Yes, in the sense that you get unlimited usage of our offering for a fixed monthly price. But the best comparison would actually be with Amazon Prime, which also has an all-you-can-eat concept – with the exception of the newest series that you have to purchase separately. It’s the same at Utomik. For ten dollars a month you get access to all the popular games. If you want the newest of the new, you can buy those games from us separately.”

“An important aspect of the Utomik platform,” adds Tops, “is that the games run on the end-user’s system and not in the cloud, which is how other providers do it. That makes a huge difference is operation costs and the user experience is much better”

With our platform, you download the beginning of the game and then you can start playing right away. The rest is downloaded bit by bit as you play. Gamers can immediately get going without first waiting for the whole game to download.”

What’s been the biggest lesson you’ve learned so far?

“At one point at the end of 2013, we had so much in-house knowledge and experience, and yet we noticed an investor doubting us. He said, “You have to make a bigger plan, you can do much more.” To take a step back from what we were already doing, we asked ourselves: if money were no object, what is the greatest, biggest or smartest thing that we could build? Then it was suddenly clear: we want to become the Spotify or Netflix of gaming. It’s a question you should ask yourself on a regular basis and I recommend it to everyone.

And what has been the highlight until now?

“The lesson we learned at the end of 2013 is something that I still see as the highlight. Everyone gained more focus and energy, before that we were just grafting. We came up with the name Utomik, had a logo designed and transformed the office.”

And how far along are you now?

“We’re now in closed beta (a closed testing phase) where users from different countries test our platform. We currently have around 400 games and more are added each week. We’ve noticed that our users consider a wide offering important. Getting new and better known games is of the highest priority at the moment, and luckily it’s going well. We’re also receiving a lot of positive feedback, our user score is nine. The testing phase will end in November and then we’ll really get going so that everyone can use Utomik.” 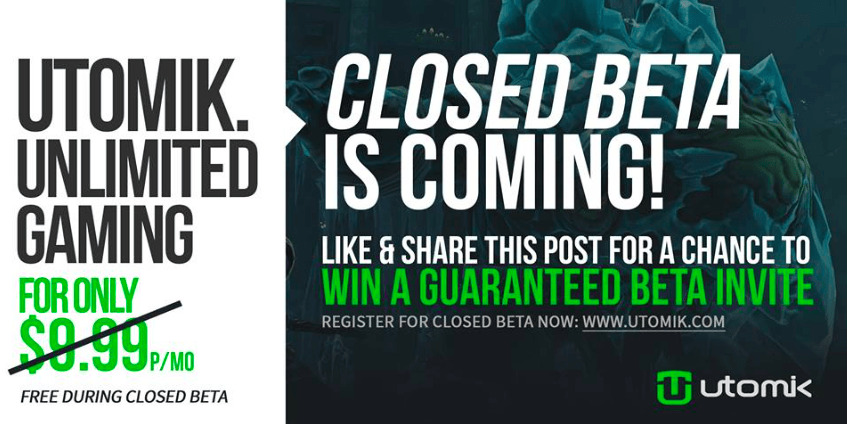 Officially you’re an American company and yet you’re based in Eindhoven?

“It’s handy to be an American company for the attractiveness and we’re also over there a lot. I spend about half of my time in the United States, mostly in Los Angeles, San Francisco and Seattle. Many games providers are based there, which is, of course, very important to us too. But almost the entire team is here in Eindhoven and there’s a lot happening here in terms of gaming. There are companies like Game House and Blue Giraffe, and then there’s the scale on which we’re working. Eindhoven will soon have the largest gaming sector in the Netherlands.”

This is the eighth profile of an Eindhoven start-up from this year’s Top 10 Start-ups to Watch. Read all of the profiles so far: