Did he ever think he would give a pitch at the major symposium for the food and IT sector, the Food Bytes Summit in the United States? The Ministry of Economic Affairs wanted to show what the Netherlands can do in the field of food and IT and called August de Vocht of NoFoodWasted. By the end of June, De Vocht was on a plane to San Francisco. The trip earned him several international contacts and in no time time there was even a film. Today we’re talking to the man who is building an app to combat food wastage. Or rather, the man who is starting a movement, as they’d say in the States.

August de Vocht started NoFoodWasted a year and a half ago. The entrepreneur explains how 400 million Euros of expired products are thrown out every year by supermarkets. “What a terrible waste,” thought De Vocht, who came up with a concrete solution for this problem. With the “afgeprijsd” (discounted) app you can see which supermarkets in the area are lowering the price of products that are nearing their expiry date. “NoFoodWasted indexes the discounted items and informs people about the products that are on their shopping list via the app. In this way, more products that are almost expired can still be sold.”

The app now works in twenty-five supermarkets from five different chains across the country. Albert Heijn on the Cassandraplein in Eindhoven is one of the participants.

“The enthusiasm that consumers have had for the app. In the initial phase I visited supermarkets a lot to see how people use the app. Customers often came up to me to talk to me and to ask me questions. The fact that people are actually downloading the app and putting it to use is just really cool. The supermarket owners who are now participating are also noticing the difference. They don’t have to throw away as much food.”

And what lessons have you learned?

“There’s a lesson I can recommend to every entrepreneur and that’s going and giving a pitch in the United States! Or at least in front of a completely new audience and in another language. It’s so educational. The problem of wasting food is just as prevalent in the States as it is in the Netherlands, although they look at it totally differently. So the solution I explained was the same, but I approached it from another angle. Americans think differently and, most of all, on a much bigger scale. And now when I give a talk in the Netherlands I get something out of it.

How did the pitch go in the end?

It went really well. Ten companies were chosen from the 150 applicants to give a pitch there. We were the only Dutch team, the rest were Americans. The nine other companies were actually at an even later stage and already had all of their funding. We weren’t so far along, we were still in talks with investors. But we still came second in San Francisco, which was really cool. The audience reacted very positively to NoFoodWasted and I was even invited to go to Stanford University to talk about my company. One of the top three universities in the United States and I got the chance to explain to students and professors what we were doing to combat food wastage. Incredible!” 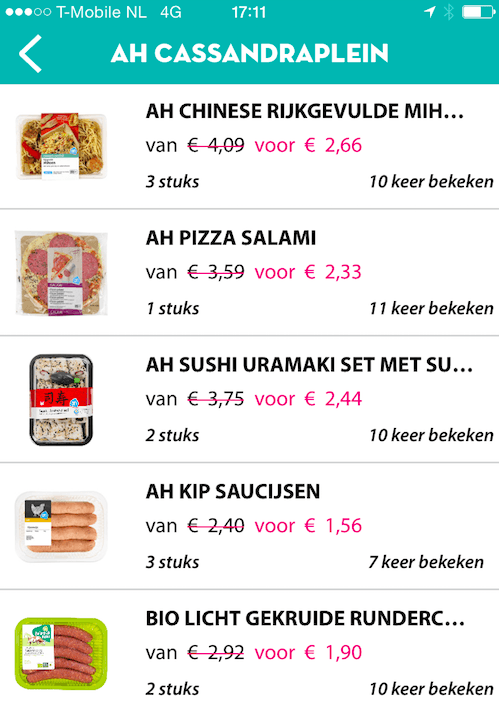 When I started a year and a half ago, I had the opportunity to set up the company in Amsterdam or in Eindhoven. I was looking for a place that was preferably nearby (De Vocht has a company in Tilburg, red) but was also international. I find Amsterdam and Eindhoven interesting and international. Eindhoven was nearer and that’s why I’m based here. There’s a really good vibe here and I’ve received a lot of support from different parties in the region, such as from Brainport Development, where they understood what I wanted and where they have loads of knowledge. They also helped sort out this office space on the High Tech Campus, for example.

“The next most important step is to implement the app throughout the whole of the Netherlands and to further develop the app itself. So we need a new round of investment. One party is already on board but we are open to a second investor.

Another special project is the documentary that is currently being made about NoFoodWasted. About the cool stuff like the trip to the States, but also about the other side of things: the difficulties that you always have to deal with as a start-up.

Here’s a trailer for the documentary that Daan Willekens and Thijs Verwegen of D2D Media are currently making about the NoFoodWasted start-up.

This is the fourth profile of an Eindhoven start-up from this year’s Top 10 Start-ups to Watch. Read all of the profiles so far: