March is already in full swing. However, at IO we’re taking a look back at February. After all, we still owe you a Start-up of the Month! Each workday at IO you can follow those innovation-mad pioneers who are trying to bring the unexplored world of the future and science fiction into the present.

Our editorial staff will choose a weekly winner from all these participants and these weekly winners will compete against each other for the monthly trophy at the end of the month. And as we are not averse to a bit of democracy, our readers also get to have a say.

The winner of the Start-up of the Month for February is … *drum roll*- Emergency Eye! Emergency calls are still being made with telephones even though the 21st century has been going on for 20 years already. Audio can tell you a lot about an emergency … However, these situations are not always so straightforward. Often the emergency services are at the mercy of the caller’s description, and they might be panic-stricken or for some other reason unable to describe the situation clearly. A piece of software should change this.

Instant eye on any emergency situation

With one push of a button, the call handler can see what’s happening via the notifier’s smartphone camera. The major difference from other initiatives is that Emergency Eye works completely autonomously. No special apps need to be installed on users’ phones. This tool also offers a chat function (with a translation tool) so that text messages can be exchanged. Ideal for those who are most at risk, only speak a foreign language, are deaf or hard of hearing. Even if the notifier is holed up in front of an aggressive suspect in the vicinity, they can now make an emergency call without making a sound.

It’s actually quite weird that this hasn’t been introduced yet, right? It sounds almost too logical. At least that’s why the company won one of our weekly awards last February! It now turns out that Emergency Eye is also able to mobilize a lot of fans too. Congratulations! 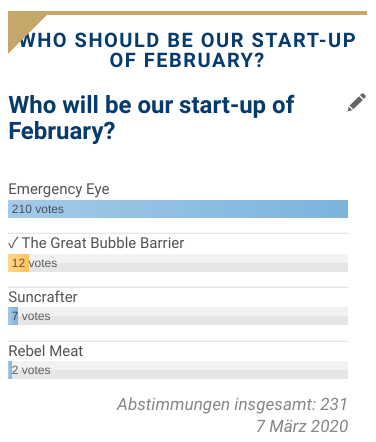 Would you like to read more about start-ups? Read all articles in our series here.

Arjan Paans is editor-in-chief of Innovation Origins DE. Between 2003 and 2008 he worked in Berlin as a foreign correspondent. Aftewards he was a news manager for several Dutch newspapers. Arjan is married and has one son.

Water increasingly important as a source of precious substances