Solar cell manufacturer Hanergy Thin Film Power and Thin Film Solar Research partnership Solliance today signed a Memorandum of Understanding, highlighting their intention to develop a strategic collaboration in the area of integrated solar solutions for buildings and infrastructure. The first product that parties aim to bring to large scale industrial manufacturing is a pavement with integrated solar cells for SolaRoad, the world’s first road that converts sunlight into electricity.

One of the pilots is planned in Brabant: the cycle highway between Tilburg and Waalwijk.

Signing of the MOU took place at the Holland Pavilion on the China Shanghai International Technology Fair (CSITF) where the Netherlands participates as country of honor in a green technologies innovation mission, strengthening the R&D collaboration and business opportunities between China and the Netherlands amongst other in the field of solar energy. High level officials from the Netherlands and China attended the ceremony, including the Dutch Secretary of State for Economic Affairs Martijn van Dam.

We are ready to propose multiple locations for pilot projects in the coming few years; a first good opportunity is a ‘cycle highway’ between Tilburg and Waalwijk”Anne-Marie Spierings, Gedeputeerde provincie Noord-Brabant

Large scale industrial activity
Mr. Li Ming, CEO of Hanergy Thin Film Power Group EME, is confident that this is the right time for this innovation: ‘Solliance and Hanergy see a significant potential for large scale industrial activity and application of thin film solar solutions in building and infrastructure integrated PV-products. Hanergy is world leader in the manufacturing of a broad portfolio of flexible thin film solar products, among which the flexible CIGS film from Global Solar, which was acquired by Hanergy in 2013. High Tech from the USA, the Netherlands and China is coming together here. We look forward to work with Solliance on the further improvement of our products to even better fit the requirements of various applications.’

Sunny road to the future
Huib van den Heuvel, director of Solliance, also sees a sunny road to the future: ‘Integrating solar cells in a road is an idea that I didn’t immediately recognize as revolutionary, but in the meantime I see that if we can create a positive business case for solar energy generation here we can do it virtually everywhere, and we are convinced that we will succeed in doing so. The combination of this robust and high-performance flexible solar cell material from Hanergy and industrial, roll-to-roll manufacturing strategies opens up completely new opportunities. We are seeing the start of rugged solar technology coming to the market. Our role is to enable the roadmap of SolaRoad towards a competitive levelized cost of electricity by further development of the thin film solar manufacturing and integration processes. Next to SolaRoad we see excellent opportunities for products such as prefabricated roofing and façade components based on Hanergy substrates.’

SolaRoad as a successful pilot
The Dutch province of Noord Holland has enabled the start of SolaRoad in 2011, together with knowledge partner TNO, and commercial partners Dynniq and Strukton Civiel. Paul Rutte, Manager Innovations at the province: ‘we have been very enthusiastic about SolaRoad from the beginning in 2009 because we see the contribution that existing infrastructure can bring us in the transition towards a sustainable energy system. SolaRoad successfully piloted the world’s first prefab element-based pavement in a public test road near Amsterdam since 2014. A first trial with Hanergy technology embedded in SolaRoad prefab elements was piloted in the test road near Amsterdam in 2016. We are pleased to see that further bundling of forces is now taking place in order to accelerate the start of industrial and large scale production of solar pavement.’

Another strong supporter of the initiative is the Province of Noord Brabant in the Netherlands. Vice Governor Anne-Marie Spierings of the province of Noord-Brabant: ‘We have given our full support to the ambition of Solliance to lead the way in Europe on the research, development and introduction of technologies for thin film solar solutions to enable an economically feasible zero-energy built environment. This SolaRoad product is in our view an example of a perfect integration of renewable energy technology in public infrastructure. We are ready to propose multiple locations for pilot projects in the coming few years in order to validate the business case; a first good opportunity that we have identified for later this year is a ‘cycle highway’ between the cities Tilburg and Waalwijk, one of 5 innovative cycle highways in Europe and part of the EU project ‘CHIPS’. We look forward to large scale implementations in three to five years from now.’ 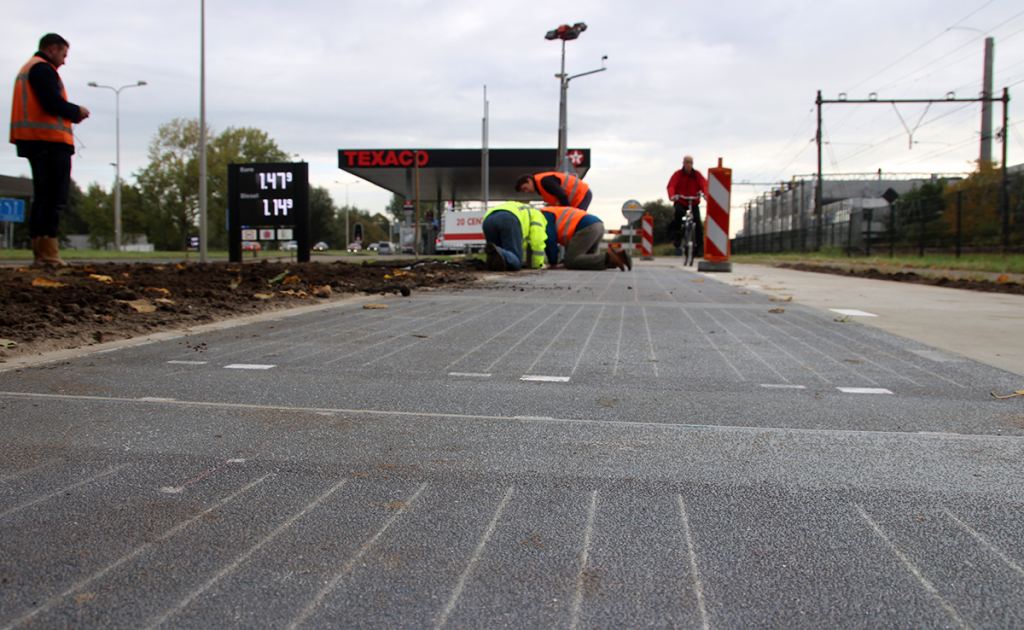