With a total score of 100 out of 100 points, Solar Team Eindhoven became a World Champion for the third time in a row. The team showed to the world that they had built “the best solar car in the world”. More importantly, they showed that with hard work dreams for a more sustainable future can become a reality.

The most important thing I learned is that hard work pays off and that you if you collaborate with your team, everything is possible.Wout Gubbles,

At the start of the Challenge, Solar Team Eindhoven had one mission – to contribute to a more sustainable future and inspire more people to follow their example, Wout Gubbles, team manager of Solar Team Eindhoven, explained. By building the futuristic Stella Vie – the family car that not only uses sun as power but supplies energy back to the grid and which was hailed as “the future” by experts at the World Solar Challenge, the team successfully accomplished their mission.

Moreover, out of the twelve cars that started in Darwin only six finished in Adelaide and Stella Vie was the only one among them which managed to carry five people almost all the way through the 3000km. Challenge. The accomplishments of the team were distinctly acknowledged by the jury: “Team Eindhoven are to be congratulated on their achievement to date – clearly the most energy efficient solar car in the field, capable of generating more power than they consume. This is the future of solar electric vehicles. When your car is parked at home it can be charging and supplying energy back to the grid.”

Success like this, however, does not come easy. The team faced some challenges: “We did not have technical issues, but on the last but one day the mid console broke at the last turn at the control stop. We were not sure if that would damage our advantage,” Gubbels explained. “We had the worst weather ever since the last three editions of the Challenge – very hard winds with a lot of rain, but we knew that before the start, so we prepared and we did not take a lot of risks.” Fortunately, the heaviest storms were during the nights, yet, because of the rainy and cloudy weather the team had to charge the battery extra.

One of the hardest moments for the team was the end: “It was pretty scary in the end. On Friday there was a lot of traffic on the road, it was a peak hour and it was pretty hard to manoeuvre. That was a scary moment and we did not know if we could do it.”

They not only did it but got the maximum points for both efficiency and practicality. How did they achieve it? “Our car is aerodynamic and our systems are solid, we did not have any technical issues. We also have a pretty clear interior and all jury members acknowledged that.”

Dr. David Snowdon, Bridgestone World Solar Challenge Faculty and Cruiser Class Manager, spoke highly of the accomplishments of the team: “I congratulate them on their innovation, practical design, and interior style with the every-day driver in mind. ‘Stella Vie’ is a wonderful solar car in a field of exceptional cars and teams.” 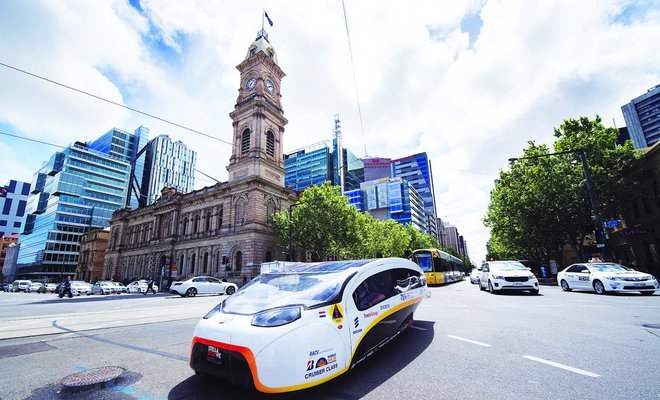 Now after the team has succeeded in both their missions – becoming a World Champion and spreading their message for a more sustainable mobility future to millions of people around the world, they are heading to their next goal. “First we will have a well-deserved holiday. We are also going to try to show our car as much as possible not only in the Netherlands but also in Europe. We have this idea to make a tour around Europe, drive around, and meet other teams. This is of course only an idea for now.”

Gubbels also shared in what other ways this experience was so valuable to him: “During the last week, I learned a lot. It was a lot of fun but the most important thing I learned is that hard work pays off and that if you collaborate with your team, everything is possible.”