The Eindhoven Brainport region needs 10.3 billion to remain a leading region in the Netherlands.
In order to continue to advance as a key region both nationally and internationally, the Eindhoven Brainport region will need 10.3 billion euro during the next government term. About 80% of this money will need to come from taxpayers, and the rest will come from the private sector, as announced to political parties today at the Mauritshuis Art Museum in The Hague as part of the Brainport National “Action Agenda”.

More than half of this budget (5.3 billion) will be dedicated to strengthening the “business climate”. Some of these measures include improvements to transportation infrastructure such as roads, railways, and an increase in flight traffic, but it also includes things such as the completion of a “Dutch Design District” in the city centre. The logic behind the focus on strengthening the business climate has to do not only with the region’s current current position, but also with the expected future growth. “We anticipate the size of the labour market in Brainport to double by 2030, reaching two million people. That’s the only way we’ll be able to meet the growing demand from companies. To achieve this, we need to first catch up to where we need to be, and then work on strengthening the business climate even further. What we can offer now is too limited: our international reach falls short and we’re having trouble unlocking the full potential of key locations.”

The other 5 billion will be allocated to attract talent, to better education opportunities, business creation, and social innovation.

To put the 10 billion in perspective, the agenda’s authors explain that this amount “can be compared to the 2.5 billion euro that the high-tech companies in the Eindhoven Brainport region already invest annually in research and development.”

E52 has made a series of 25 video interviews about the agenda. Watch all the episodes here.

“The government and the Brainport region are working together on the Brainport National Action Agenda because of the important role that the region’s knowledge-intensive manufacturing industry plays in addressing the major societal challenges that our country faces, and in ensuring the country’s recognition as an international powerhouse in innovation. The cabinet will invest heavily in the Brainport region in the coming years. In the next six months, the collaborators will work out a concrete budget and plan of attack that aims to strengthen the earning power and international competitiveness of the region as one of the three core economic areas of the Netherlands. In anticipation of this growth, the government plans to allocate a yearly budget of 30 million for the strengthening of regional resources.”Brainport Nationale Actieagenda, Brainport would like to see this passage appear in the new government coalition agreement

In a 20-page document officially entitled, “The joint Brainport National Action Agenda for region and government”, collaborators from the private sector, research institutions, and government show not only what the region has to offer the rest of the country, but also what is needed in order to keep that contribution going. The core of the argument focuses on the strength of the region as an innovation centre and an economic “motor”, full of “bright minds and able hands”.

The document points to the fact that the Eindhoven Brainport region boasts the highest concentration of high-tech manufacturing industry knowledge in the Netherlands. “In the past 15 years, the region has developed into a powerful economic motor for the country, with knowledge and talent acting as the fuel for technology innovation and new business. The region provides groundbreaking solutions for the challenges we face globally, such as the transition to renewable energy, health solutions for an aging and growing population, and sustainable mobility. With its strong position in key technologies, the Brainport region is crucial to bringing the Dutch economy to the ‘next level’”.

But it comes with a warning: Brainport can’t do this on her own. “We need a boost, in order to ensure a top position in the increasingly competitive landscape that includes other tech regions such as Stockholm, Munich, Singapore, and San Francisco.” 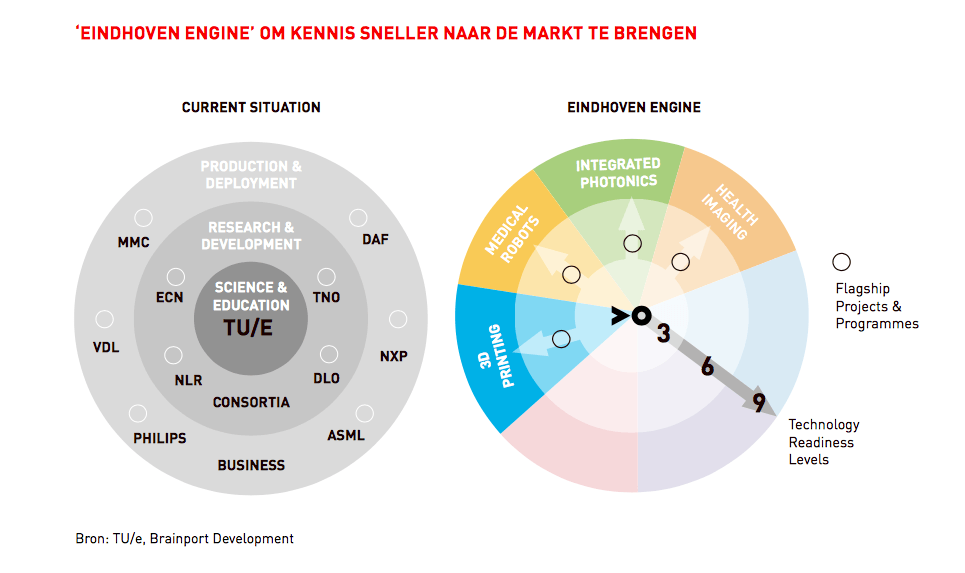 “Eindhoven Engine”
The importance is massive, the document’s authors argue. For the region itself, of course, but not only that. In the end, it’s not “just about the Netherlands, but about improving the lives of the currently 9 billion residents of the globe”. To underline the fact that this statement is not merely a boast, the report highlights the leading role that Brainport already takes in areas such as clean energy, smart mobility, health innovation, sustainable food production, and security in public spaces. The “Eindhoven Engine” has been driving four main areas of development: 3D printing, medical robotics, integrated photonics, and health imaging. What’s key here is the rapid development from idea, to prototype, to product. “We’re establishing a new way of working together to bring knowledge to market faster. For that, we need a physical place to ‘land’: a dynamic environment where R&D professionals, students, and entrepreneurs join forces and achieve breakthroughs together, through an alliance of knowledge.”

In order to achieve these goals, cooperation needs to be accelerated on a national scale, and the region needs to take its ambition to the next level, and fast. “Within six months, we need to have a concrete budget and plan of attack that aims to strengthen the earning power and international competitiveness of the region as one of the three core economic areas of the Netherlands.”