The new gold, the next ASML, one of Europe’s five “key technologies“, a potential billion dollar business. Superlatives are thrown at you when you speak to a representative from the photonics sector. But as is often the case with new technologies, what is a concrete vision of the future for the frontrunners, is at most a vague promise for the rest of the world. Next week, the region will be dominated by Photonics Application Week. Reason enough to take a close look at what this promise means.

Photonics is driven by the power of light. We know it primarily from the fibre-optic cables, where information is transported from A to B by light signals. But photonics are also increasingly used for the production of superfast and super-efficient chips. Here too, light signals are essential, only on a nanoscale. And it is precisely in this area that Brabant is the global service provider. This is mainly due to years of research at the Eindhoven University of Technology. Companies that emerged from that research, such as Smart Photonics and EFFECT Photonics, are now setting the global tone in the development of photonic chips.

“Long before cracks appear in an aircraft wing, this photonic chip warns where the weak spots are”

Without chips, there would be no smartphones or computers, but no planes or cars either. The whole world runs on chips. At the moment it is mainly electronic chips, but they are reaching their limits. The solution is made in Brabant: there the first steps have been taken to have the chips work with light beams instead of electronic signals. And that works. That is precisely why photonics is such a promising new sector.

In sectors such as automotive, aviation, aerospace and medical technology, photonics can accelerate progress. And at the same time, photonic chips can keep the stagnating internet traffic going. Significant progress has already been made in the transport of information thanks to fibre-optic cables, but the data centres will be the bottleneck within now and about five years: the electronic chips that these centres run on will then no longer be able to cope, and the demand for bandwidth will become too great.

Ewit Roos, director of the Eindhoven-based PhotonDelta, has enough examples to prove the usefulness of photonics. “Take the aircraft industry, a sector where safety is paramount, and you have to be able to rely 100% on the operation of the components. A photonic chip in an aircraft wing can accurately calculate how much tension there is at each point of the wing. And long before cracks appear, warn where the weak spots are.” But there is also the everyday use. “Because these chips are so energy efficient, your smartphone may only need to be charged once or twice a month.”

The world has now realised that the light comes from Brabant. Specialists from Asia and America come to the Netherlands to learn the game. And people like Ewit Roos travel the world to tell ‘our’ story and listen to developments elsewhere. “We must do everything we can to make the most of the opportunities in this sector,” says Roos. “We are still at the very beginning of development, and that means there is still a lot to learn.”

China, Japan and the US

And that requires money. Rose: “We have a head start on the rest of the world, but the competition is also panting in our necks. In countries such as China, Japan and the US, hundreds of millions are now being invested in the development of photonics.” Within Europe, under the leadership of PhotonDelta, full photonics cooperation has now been established that should keep the competition around the world at bay.

Roos has calculated that here too an investment of somewhere between 300 and 600 million is needed. “We need that money for the industrial ecosystem, for the design and production of the chips, but also for testing them and packaging them in such a way that they can communicate with each other.”

Some 25 Dutch companies are involved in the development and production of photonically integrated chips (PICs), most of which are located in Noord-Brabant, Gelderland and Overijssel. “These 25 companies are not yet mature and need a push,” says René Penning de Vries, chairman of the Dutch Photonics Agenda, a public-private partnership to make photonics visible in the Netherlands. “We want to help them so that they can develop into world players.” He expects that these 25 companies together will account for an annual turnover of €1 billion and four thousand jobs by 2025.

(text continues below the video)

Provided that investments are made now. That is why a little cheering took place in July 2018 when Penning De Vries was able to announce investments amounting to € 242 million. Of that quarter billion, € 160 million is already there. Of this, € 35 million comes from the national government. The remaining € 125 million will come from approximately half of the provinces of Noord-Brabant, Gelderland and Overijssel, the other half from the business community. Other parties that contribute are the universities of Eindhoven, Twente and Nijmegen and companies such as EFFECT Photonics and Smart Photonics.

It is now up to the researchers and the business community to make the next steps concrete. So that in a few years’ time we will not only have been able to add a lot of new functions to our smartphone, but we will also have to charge that thing once a month. 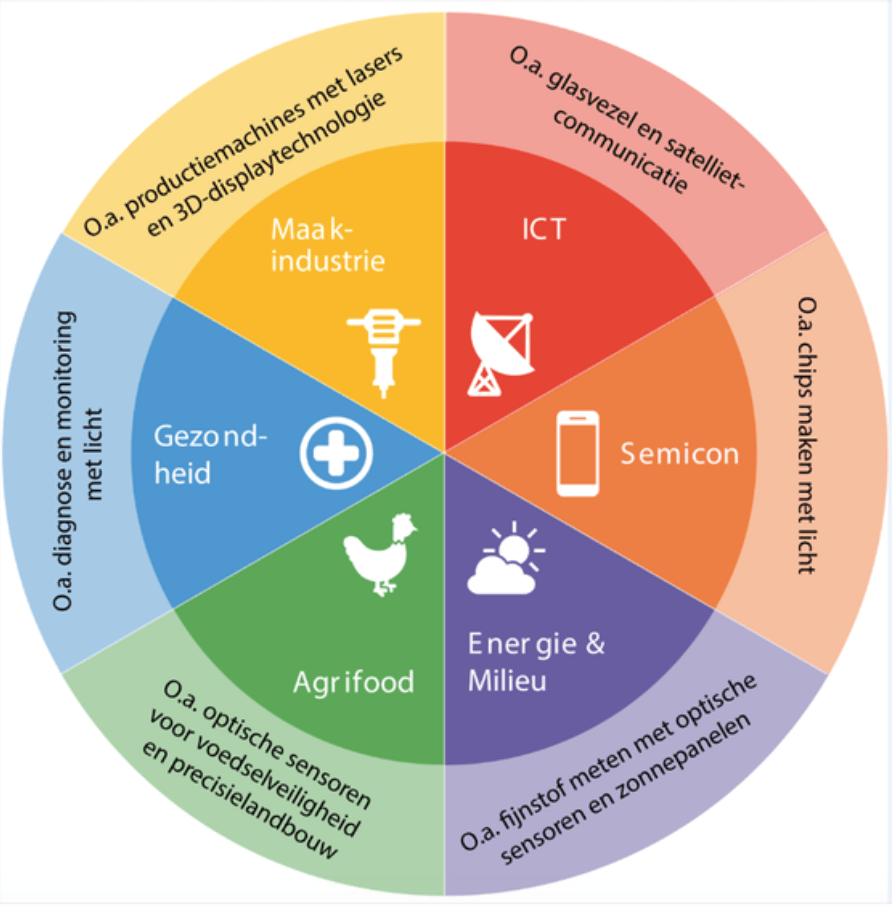 Different market applications for photonics. The photonics industry is expected to grow by 40% worldwide between 2018 and 2023. Image from National Agenda Photonics

Innovation Origins often publishes about all aspects of photonics. Here is a selection of those articles.