Sweden remains the most innovative country in Europe. Runner-up this year is Finland, followed by Denmark, the Netherlands, and Luxembourg. These five countries are the “innovation leaders in 2020”.  The European lead over the U.S. and China is still visible but is getting smaller. The withdrawal of the United Kingdom from the EU earlier this year has had a small impact on the EU’s average innovation performance “but has not affected the relative performance of the Member States or the EU’s global performance”, according to the European Commission.

Every year, the EU publishes the European Innovation Scoreboard. It analyses the innovation performance of the individual EU countries, also in comparison with other EU countries and internationally. In this way, everyone can see the strengths and weaknesses of the different countries and also in which areas there is still room for improvement.

The 2020 Innovation Scoreboard shows that the EU is growing ever faster internationally and that the individual countries of the European Union are becoming ever closer together. The average innovation performance of the EU has increased by 8.9% since 2012. The biggest increases were in Lithuania, Malta, Latvia, Portugal, and Greece.

In a statement that accompanies the report, European commissioners Mariya Gabriel and Thierry Breton say that research and innovation have proven to be an essential part of the coordinated EU response to the coronavirus outbreak and they will be vital to support Europe’s recovery. “They boost the resilience of our production sectors, the competitiveness of our economies, and the digital and ecological transformation of our societies. Research and innovation ensure preparedness for the future and are critical to deliver on the European Green Deal.”

China to take over the United States 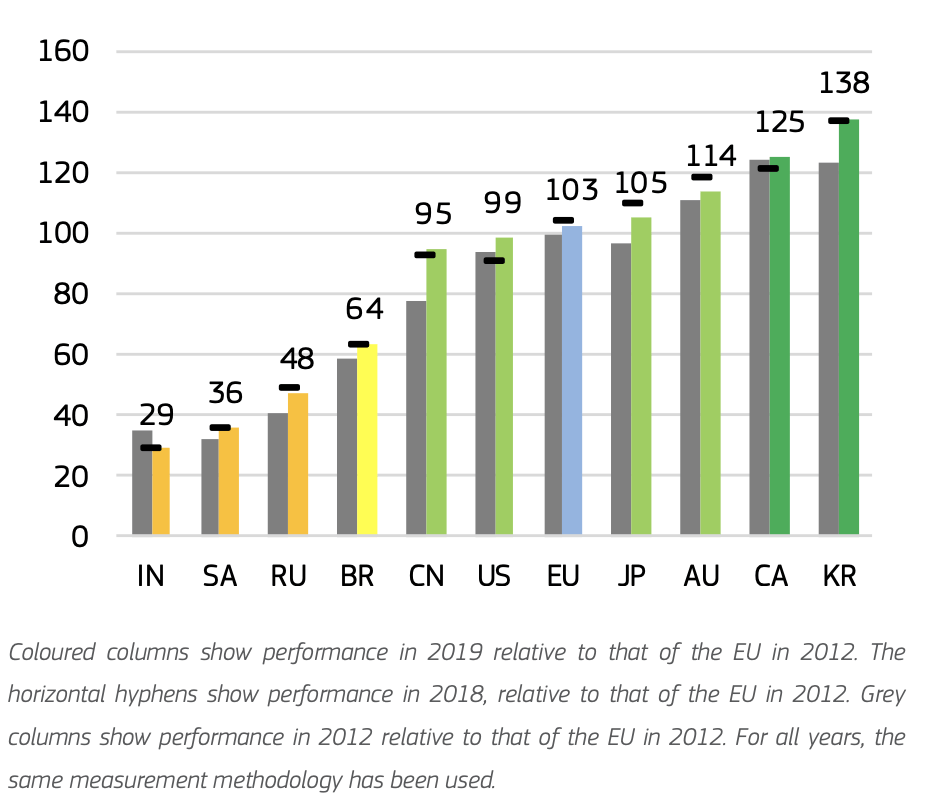 On average, the innovation performance of the EU has now increased by almost nine percentage points since 2012, in particular due to strong performance increases in indicators like Broadband penetration, International scientific co-publications, and Non-R&D innovation expenditures. Since 2012, innovation performance increased in 24 EU Member States and decreased in only three. Performance has increased the most in Lithuania, Latvia, Portugal, and Greece, and decreased the most in Slovenia and Romania. The process of convergence within the EU, where lower-performing countries are growing faster than higher-performing countries, has continued in 2019.

According to the authors, while the UK’s withdrawal from the EU had some impact on the average innovation performance of the EU, it did not affect the relative performance of EU countries compared to the EU’s global performance.