No windows on the outside, only bricks and in the middle a big red door that gives access to this new building on the TU/e campus. It’s a bit like a powerhouse, but much bigger.

Once entered Ventur – that is the name of the new TU/e building – the huge steel construction immediately stands out, on the far right a steel square as high as the ceiling, which runs down funnel-shaped and turns into glass. These big windows – nine in total – continue all the way to the back of the hall, approximately 27 meters. There the steel tunnel continues and makes a turn in order to make a loop.

The new @TUeindhoven #windtunnel will just be called “wind tunnel”. For the new building that houses this facility however, we had to come up with a new name. We finally chose “Ventur”, for several reasons: see image below. #wind #measurement #city #aerodynamics #sports #building pic.twitter.com/W2zfADXAl8

Wind tunnel
No idea where we’ve ended up today? E52 gets a tour by Bert Blocken, professor of aerodynamics, in ‘his’ new wind tunnel on the Technical University in Eindhoven. The tunnel will be officially opened in December. The whole process took over three years from the moment of the first drawings, Blocken is happy that the tunnel is finally here: “As a university, you have to keep investing in new facilities, new research methods arise all the time and we cannot remain behind. Not only for education but also to be able to keep doing good research ourselves. To keep facilities up to standard or renew them is becoming more and more difficult with cuts that the university has been dealing with for years. Because of this, we don’t only lose prestigious – national as well as European – research projects, but the quality of education also comes under pressure. So the TU/e choosing this investment was an important decision.”

“I unfortunately have to turn down VWO 6 students who are working on their profile piece, for this, running the tunnel is really too expensive, but I understand why they are giving it a try. Because who wouldn’t want to do tests in this environment?”Bert Blocken, Professor aerodynamics 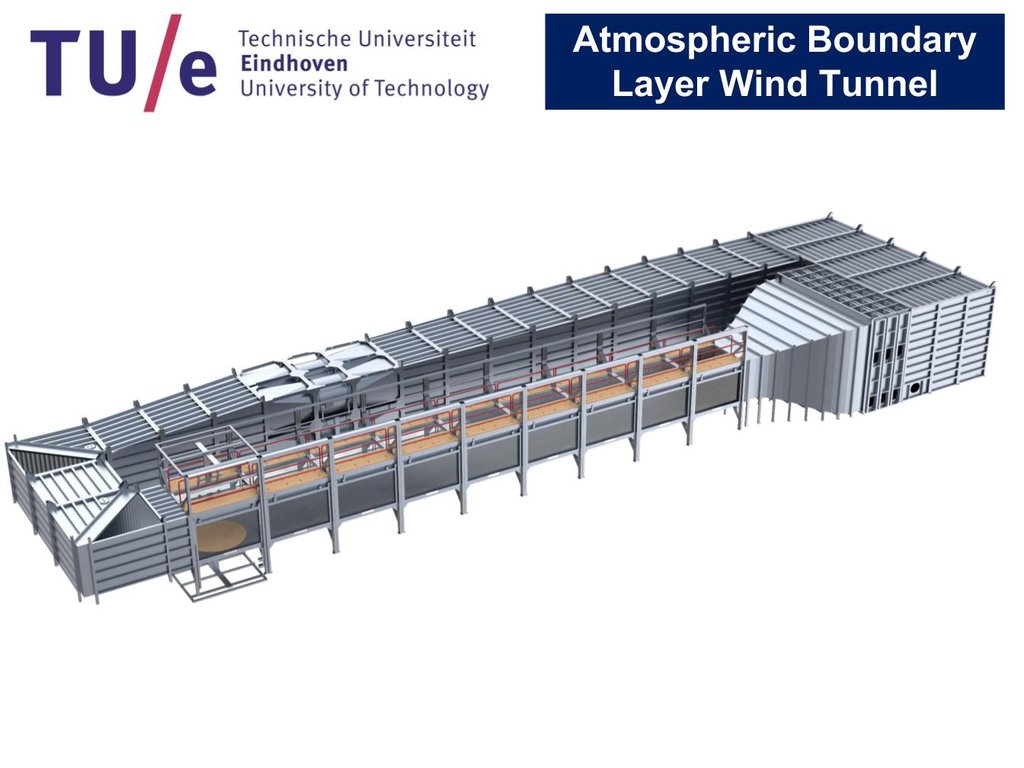 Unique
According to Blocken, this atmospheric boundary layer tunnel is unique in this world. “There are many more powerful tunnels, we’re definitely not the most powerful with wind speeds of 35m/s. But the unique thing about this test facility is in three different aspects: there are very few tunnels of this type that reach a length of 27 meters, this makes it possible to simulate large expansive wind farms – on scale – or test with complete cycling teams. To enable these tests with teams, we developed our own force sensors in which the bikes can be placed. The exceptional thing is that we can freely move them around and change the order. The force sensor works just like a bathroom scale, but this time it’s not the vertical force that’s being measured, but the horizontal force. This fully flexible system is, to our knowledge, unique in this world.”

Blocken takes a step back and points out the concrete floor where two long gutters run parallel to the tunnel: “Here will be the rails for the Doppler measuring system that has yet to be brought into position.  It’s a class-4 laser for extremely accurate speed measurements with more than 1000 measurements per second. With this system, we can measure through the wind tunnel glass along the side, the bottom and the top. This will also give us more complete measurement.” 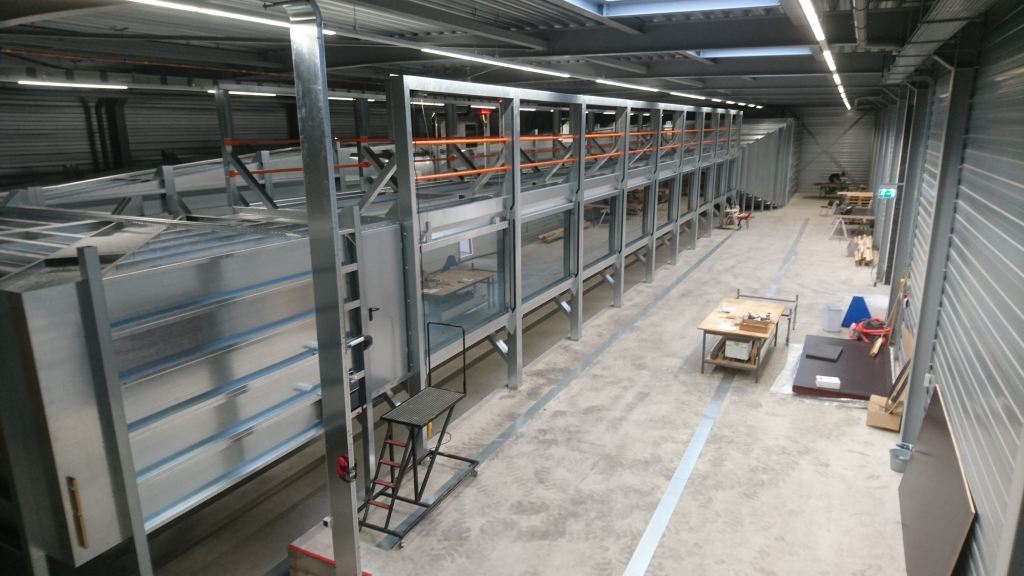 Now it also becomes clear why there are no windows in the building because when such a laser shines into your eyes, you can become blind immediately. The windows in the flat roof can be closed with a special screen. “We want to guarantee absolute safety, of course, that is why no light may escape, especially during laser measurements. The glass of the nine adjustable windows is also extra thick in order to withstand the forces of the wind. Nobody may use the tunnel alone, there need to be well-trained technicians at all times.”

Most wind tunnels expose objects to a uniform air flow – “Comparable to the situation in the air.” – The wind tunnel that will be opened next month simulates the airflow just above the earth’s surface, the so-called atmospheric boundary layer. “This makes it possible to measure wind effects around buildings, for example, we consider the correct turbulence characteristics and wind gusts, just like the wind in reality never blows at a constant speed.”

Because the construction is built in a closed loop, less energy is needed to maintain the wind speed. “The energy of the wind flow is largely reused, so the energy consumption of the four fans that start the air flow is many times lower than in a tunnel that is not circular.” When he hears the question about how much they save, he laughs: “Well, in order to determine an exact number, I still have to make calculations. I do intend to calculate it once.” 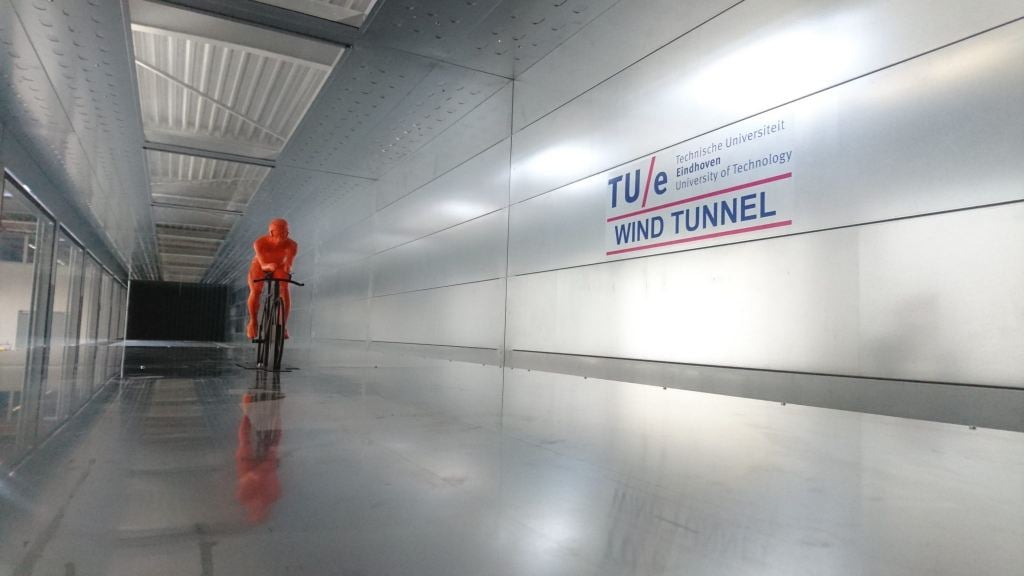 Ambitious
The parts of the tunnel were produced in East Germany at Windtunnel24.  The costs for the tunnel and the measurement equipment add up to about 1.35 million euros. “That’s a very sharp price. Colleagues in other countries came to 6 million euros for a tunnel with these specifications. The reason for the sharp price is because the company works in a region where labor costs are relatively low, but especially because they wanted to show that they could handle these sort of large and ambitious assignments, and they did really well.” Blocken thinks in a market-oriented way, after two years he wants to be able to match the revenues with the annual costs, to then earn back the investment of the university. “My ambition is to break even regarding depreciation charges and costs.”

For this the Engineering Faculty makes the test facilities and employees available to commercial parties. These can be cycle teams who want to find the best set up for a team time trial, for example, sportswear manufacturers who want to find out which fabrics have the least problems with air resistance. But also advice agencies who test what a busy traffic road does with the air quality in the environment, commissioned by the government. Or civilian agencies that have to consider wind in designing high buildings. Blocken is already getting a lot of requests, he proudly says, but he also has to disappoint people: “I unfortunately have to turn down a lot of VWO 6 students who are working on their profile piece, for this, running the tunnel is really too expensive, but I understand why they are giving it a try. Because who wouldn’t want to do tests in this environment?” Who will do test in the tunnel? “Several conversations with cycling teams and other professional parties are going on, but I can’t say anything about that yet.”

The festive opening of the tunnel will be held on December 14th with a full program: lectures, a debate and an exhibition and speeches. In addition, the promotional film of the wind tunnel will be officially launched. You can register here. 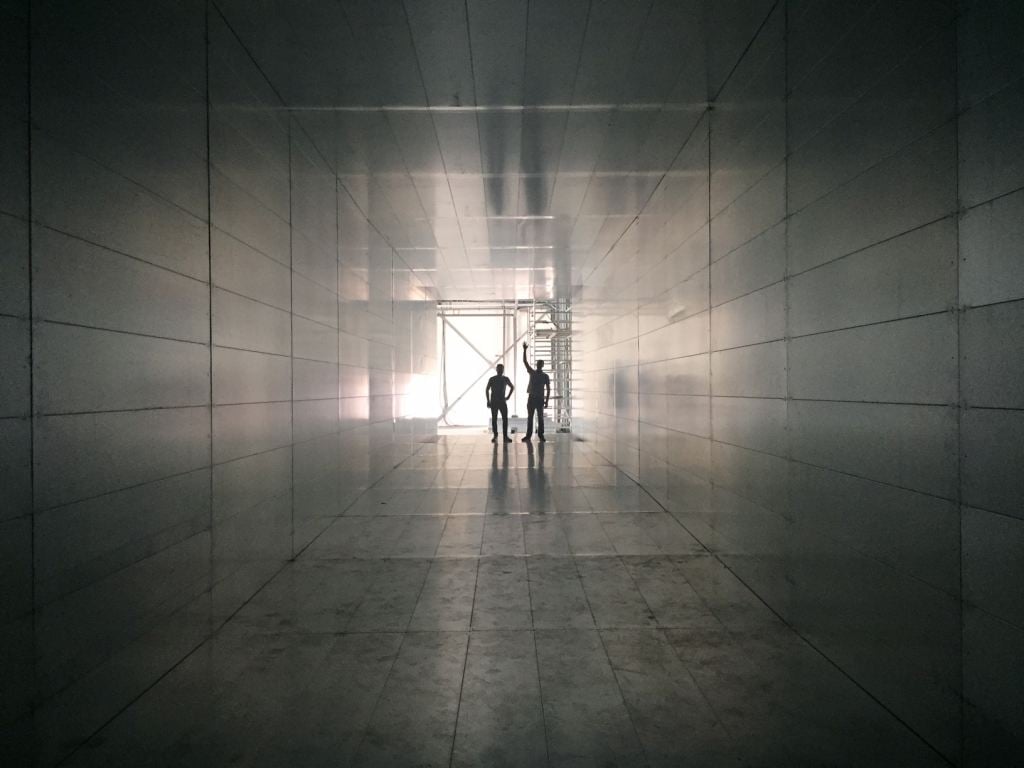