We stumbled upon Gordon via thisiseindhoven.com. They featured his Instagram posts about Eindhoven, stunning ones by the way, and we checked out his Insta profile. There it was in his bio: Scotsman in Eindhoven. Bingo! We asked Gordon if he wanted to join this series and he responded enthusiastically. We asked him also to name a place in the city to meet. After some deliberation he let us know he wanted to check out  the Blob, because he had never really been inside it. And so on a rainy Thursday, we met up for lunch with a view. “The first time I came to Eindhoven was almost 12 years ago for an Erasmus program at the Eindhoven Technical University. I came for the program and had no intention to stay here. Little did I know I would meet a lovely girl from Romania and that we would get married in Eindhoven a few years later. Before the marriage, we had a long distance relationship with me in Glasgow and her in Eindhoven. In 2011 I joined her here again.”

“Photography is a hobby and I have my Instagram account, @goooordiiii, since last year to show my family and friends where I live. My sister says it is only architecture, she wants to see more people in my pictures. I love architecture, but next year I will try to mix it up a bit with more variety. I also have a lot of interaction with people via the app. They sent me messages when they like my pictures or wonder where I made them. Instagram is also a nice way to discover the city. I always walk our dogs and now we do longer walks because I want to discover new things.I have discovered so many new places, and learnt a lot about the history of Eindhoven because when I take a photo of somewhere I immediately Google it to find out what I’m actually stopping to take a photo of! It’s becoming a good habit!”

“I have discovered many new places and learnt a lot about the history of Eindhoven”Gordon Jack, Architect

“Eindhoven is becoming a big city and people must find it so amazing that they never want to leave the city!. The growth of the city comes with opportunities: think big architecture and urban design. I am curious about what’s happening in the upcoming years. Expanding is good for the city. With our architectural firm, we made a design to redevelop the Evoluon into a museum park. The city is building so much housing at the moment but with very little focus on big cultural facilities. I believe we need to invest in things for people to do once they move here. There is a need for a museum to display, explain and celebrate all the tech and design developments made in the region, set in an iconic building. The museum displays all the work publicly and makes complex designs understandable for the audience.” 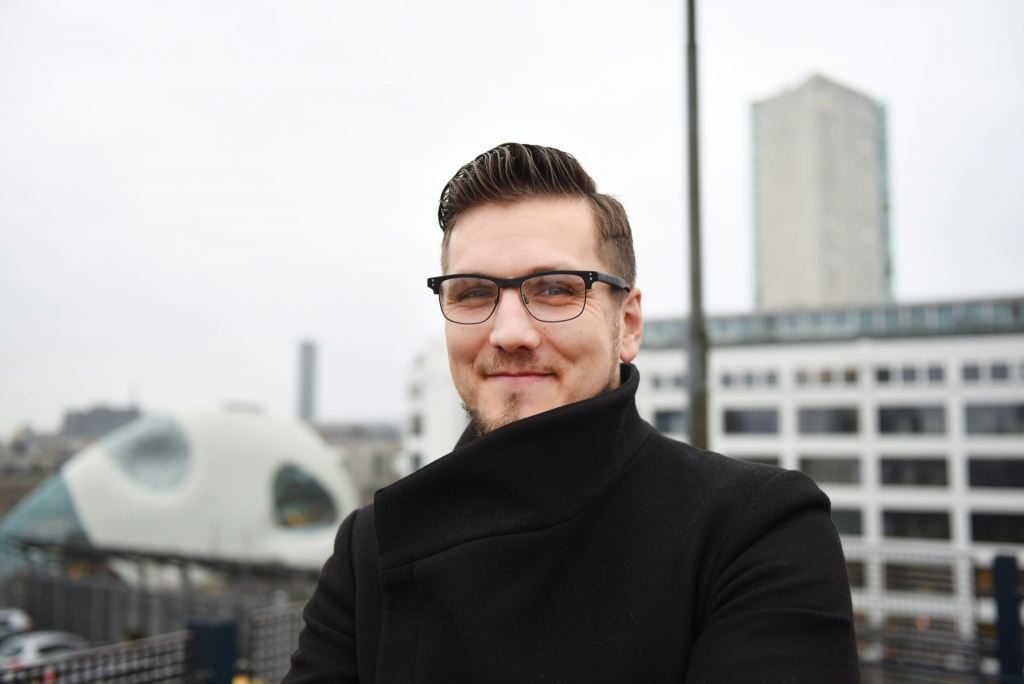 “When my parents are here, they want to go to Amsterdam too. That is an entirely different city, you really can’t compare them.  But Eindhoven got much more international, you see and hear English everywhere. In my spare time, photography is my hobby, it makes me happy. With my wife, I make trips around the city, but we also go to Lommel and Achel to hike or to national park Loonse and Drunense Duinen.”  Years before Gordon came to Eindhoven, his parents already visited the city: “The fact that I chose to come to Eindhoven had also to do with my parents. They visited Eindhoven in 1978 for a match of the Glasgow Rangers versus PSV. They have pictures of that trip and you don’t see much resemblance to the current state of the city centre. The city looks completely different now.” Gordon lives in Eindhoven for quite some time now. How does he see his future here? “I would say Eindhoven is my home. Eindhoven is transforming and I want be part of that change, professionally and personally. I feel so comfortable here, that I can say I live here permanently.”