GLOW 2017 featured two art light projects created by Ellen de Vries, the head of The Lux Lab company – one of the projects was “Shine like the Whole Universe is Yours” installed on Fatih Mosque and another one was sound-sensitive LED canopy “Don’t break the sound barrier” in Nieuwe Emmasingel.  E52 meets Ellen de Vries to talk about her experience gained during the short but intense period of Eindhoven light festival.

Ellen says that she learned important things from her Fatih Mosque project. She believes that this project made her more open to people. “I was surprised how open to me and how cooperative the people from the Mosque foundation were. It’s the first project in my life in which somebody supported me in that way”, Ellen tells us. “I really learned something from this community – how to be true to your beliefs but at the same time to be open, friendly and welcoming to people of other beliefs and views.” Ellen says: “I think Western people are way too uptight and way too judgmental about people who are different from them. Sometimes we are even hostile to certain groups like Muslims.” So she asks: “Why being that judgmental, why treat each other that hostile? We are all human beings.”

Ellen wanted to express the openness to people who are different from us, in her light art design. She conveyed it with the soft light used inside of the Mosque and with the transparency of the window glass, so the interior of the Mosque was visible. Originally some of the windows had been opaque but thanks to the support that the Fatih Mosque foundation gave to Ellen de Vries’ project in every detail, the opaque windows were replaced with transparent ones. Ellen de Vries also wanted to show people the beauty of architectural elements of the mosque accentuating them with the light. The light design of the Mosque made it look more open, accessible and inviting. “On some evenings the people were actually invited to see the cables and equipment and the prayer room,” says Ellen. “And I observe that visitors meet Muslim people there in the friendly atmosphere and see how open and welcoming they are. I am happy that I played a role in this process of connection.”

“Shine like the whole universe is yours” is the title of Fatih Mosque light art project. This is a quote from an ancient Persian poet Rumi and, as Ellen remarks, it may seem as if it is about a great Ego, but in fact it is about a huge responsibility – do what you find important, don’t be afraid to be special but be responsible and be considerate of other beings in the universe. And Ellen certainly was true to this interpretation of the quote working on the project. As she tells us, she chose to face the technical challenge and program the luminars movement trajectory in a much more time and efforts consuming way than usually because she did not want to disturb people who live in the buildings next to and behind the mosque with the light.

Ellen is also telling us about the experience she gained from work with the technical aspect of Fatih Mosque project. “I am happy with the lighting design that I did, it’s very convincing. It was my goal to integrate diverse techniques into this design without using the standard event effects which are in the lighting computer – despite the fact that it was time-consuming. I worked with some projection from the inside projecting on the curtains, we used LED dots and some video over these LEDs, we used refraction techniques to create the wavy effects – I applied nearly all techniques. I wanted to integrate lasers but I couldn’t do it this time. I learned that integrating diverse techniques in one short show is terribly hard, it’s close to impossible.” But Ellen de Vries is not looking for easy ways in her work: “I always work on the innovative side of the technique. It would have been easier to repeat myself but I prefer to reach the limits of the techniques every time.“

But innovations are not about techniques only, it’s also about people who work on the project. “During the GLOW we thought at least 10 times a day that innovation takes place in a happy fight.” Ellen says that GLOW taught her something important about work with people: “The only way to make it to the end is to talk a lot, discuss a lot, stay friends. You really get to know people only when you go beyond expectations in your work together.”

And ‘together’ is not an empty slogan for Ellen. “All this is my idea, but without Appie Kremers and Will Taubert (programmers), Livingprojects (realization), Thijs Lodewijk (composition music mosque), Berry Sanders (visuals and mural painting mosque), Pharos controls (steering canopy), Van Klundert (sound-Engineering), the volunteers of Fatih Mosque and my family, friends and co-workers this would never have succeeded. And still I’m sure I forgot to mention someone.”

Ellen and her team are perfectionists. When Ellen is talking about her side project featured in GLOW 2017, the LED canopy in Admirant, which was tremendously challenging technically, she confesses that if somebody asks her whether she is happy with the results she will say no. “I am beyond the best we can do. And it’s about my feelings, not about the quality of the work,” says Ellen. 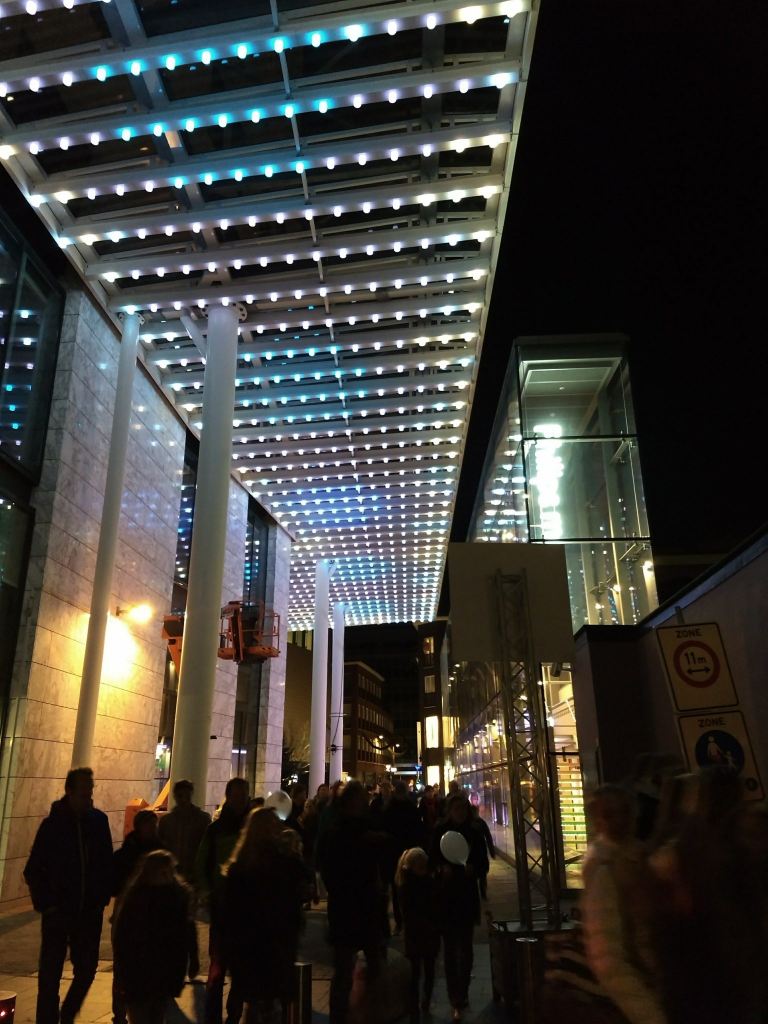 GLOW, with its intensity and technical challenges, broadened Ellen’s experience as a project leader: “I think I’ve learned a lot – you should never accept it when your team says that the process is getting too technical for you and they will solve the issue. It’s getting too technical for you now should never prevail over the discussion with your team.” Ellen came to an important conclusion after the GLOW projects – there is a growing necessity for light art development schemes or tools. “It would be great to develop on paper the way of working on these projects. It would be good to help young people with the right tool to get through the innovation process. We got through and we had it hard but the experience we gained can be useful for other people. With the right tool which helps to structure the process, we can also improve our own work next time. Currently, I am looking for a partner to develop this idea with.” Ellen underlines the importance of sharing the knowledge and experience in the field of light design. She says: “It is a pity that in the Netherlands we don’t have the light design education at the university level.”

When being asked about her future projects, Ellen tells us that she has already started her work on the permanent light design project in Rotterdam Museumpark. In Ellen’s view, the most challenging part of the project is the bridge between the Museumpark and the academic medical center. “I try to establish the connections between the Museumpark and the medical center via light. If a child from the hospital would like to go to the museums to see, let’s say, crocodiles, the information on which museums exhibit crocodiles can be available using the smart grid of Museumpark.”