Researchers at the TU/e that wrote the best thesis of 2016 were honored last weeks at the Academic Awards. The award for the best end project of the two-year PDEng designer program went to Evangelos Stamatopoulos. His model of environmental sensors is relevant for the development of self-driving cars. Together with his research group, he successfully applied this model in the Traffic Jam Assist function in DAF trucks. He tells us about his thesis and his experience during the four years he lived in Eindhoven.

What is your thesis about?
“The idea behind this project is to meet the future challenges in the automotive industry. Nowadays more and more smart assistant systems are embedded in our cars, take for example Adaptive Cruise Control, Lane Keeping or Emergency Braking. These functions are there to increase safety for the driver and people on the road, and to release stress from the drivers and to make driving a more comfortable and enjoyable experience. The ultimate goal in the automotive industry is autonomous cars and trucks, where drivers aren’t allowed to interfere with the vehicle. The first step towards this goal is to create an environment model.”

Environment model
“If you are driving, you perceive the environment with your senses and you process that. With autonomous cars, it is very important to know what is around the car. Nowadays you have sensors in the car like radar and cameras, but with just one sensor you don’t know all the information of your surroundings. That’s where the idea of the environment model came in, instead of having only one sensor that has its limitations, you could use two or more sensors and fuse them, that’s the concept of sensor fusion. So, you fuse the information coming from different sensors that are onboard the vehicle to recreate an environment model that’s more accurate and more robust, because if one sensor fails, you have another sensor that will take over the task. This will enable us to realize more advanced functions, that require a higher level of safety, redundancy, and automation.”

“In the end, we made it work, we combined two sensors in the truck, a camera sensor and a radar sensor, and we delivered a functional environment model.”Evangelos Stamatopoulos, Winner Academic Award

Sensor fusion algorithm
“We designed and implemented a sensor fusion algorithm and created software that has as an input, the output of the sensors. It mixes them together and delivers as an output, one object list that has all the information about the environment around the car. Even DAF had no experience in this field, so it was not a system that we had to improve, we had to build a system from scratch. All the concepts and theories about sensor fusion, we had to put them into practice. At the end of the nine months I spent at DAF, I had to deliver a proof of concept, so that they could see that the technology could work in their trucks. In the end, we made it work, we combined two sensors in the truck, a camera sensor, and a radar sensor, and we delivered a functional environment model. The algorithm and sensor fusion technology we made, can be used for several advanced functions.” 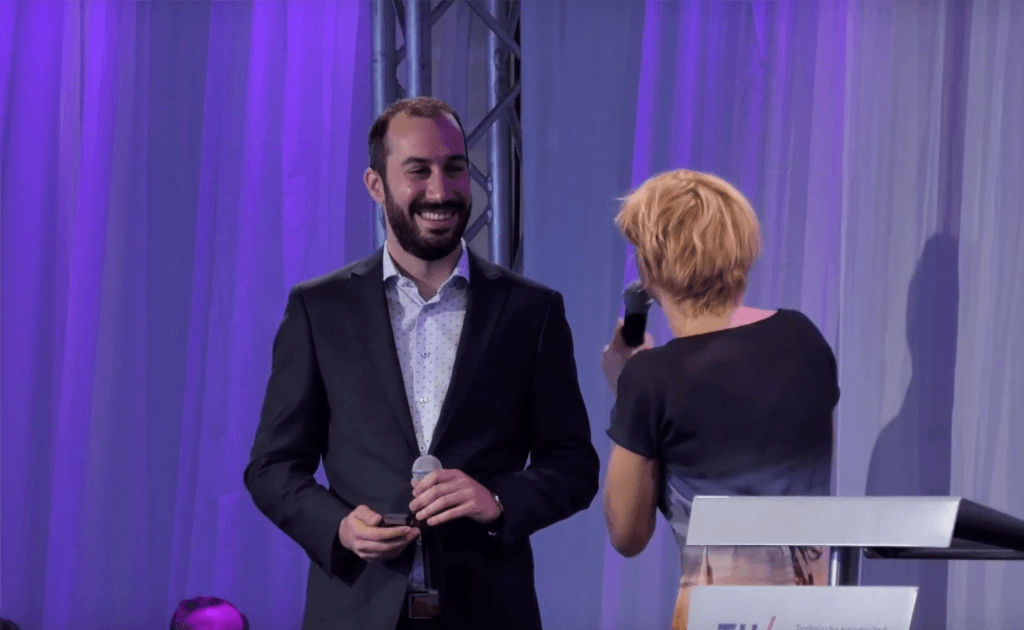 Evangelos Stamatopoulos
TU/e
How did you like Eindhoven?
“Honestly, I have spent my best four years here in Eindhoven, it was an amazing experience. I came to Eindhoven in 2012 for my master studies, I’m originally from Greece and I came here because it’s the Silicon Valley of Europe, that’s where I wanted to study. It was a great experience, being a student at the TU/e. I have met so many people, I made friends, I made amazing memories and improved my technical and non-technical skills, that gave a real boost to my career. I like the culture in this city, people are so creative, they always try to come up with ideas, with new things, you always are surprised, they don’t just think about something, they make it happen. You love technology here and that is good.”

Why Stuttgart?
“I want to try as many different things as I can, in my personal life and in my career, what keeps me motivated is to prove myself every time I try something new. So, I went to a new city and a new company and that motivates me and I believe that makes me better. I thought it was a good time to make a move and see something new. In Stuttgart, everything is about cars and the automotive industry, so it’s like heaven for an automotive engineer.”