Professional music recording is like a relationship status on Facebook: it’s complicated. A Polish start-up has invented Zylia, a device, that reduces this multistage process to just two clicks.

For amateurs, Zylia looks like a tiny soccer ball with a bright stripe. “Another funny gadget”- one might think. However, for the individuals connected to the music industry, such as musicians, sound engineers or even recording studios, Zylia is a game changer. This incredible ball is the world’s first portable recording studio and it can transform the professional way of recording music.

“Musicians always have problem when recording music. It’s not a matter of finance or apparatus, but of time and knowledge. There are always problems occurring on how to set up multiple microphones and how to mix sounds “- explains Tomasz Żernicki, Zylia co-founder and chief technology officer.

Żernicki is an audio expert: he received his PhD in digital audio processing, contributed to audio compression standards and – like almost all his colleagues – he is amateur musician.

“Musicians prefer not to focus on recording music too much. We want to dedicate ourselves to creating music. We thought it would be an amazing idea to have one simple device that records music, mixes music it and does all the technical stuff” – he states.

It seems that Zylia has turned out to be the device the founders longed to have. Let’s say there is a piano quartet: piano, violin, viola and cello. The musicians just simply place themselves around Zylia. Every instrument should briefly be recorded separately so the device knows where they are positioned. Then, the whole quartet can participate. One click, the device starts recording. Second click and Zylia stops.

After, the device automatically prepares the final recording and the user receives a complete stereo track. “The recordings sound amazing, as it also takes into account the positioning of the people in the room, so someone being positioned closer/further from the microphone is not an issue”- adds Żernicki.

But if the ensemble prefers to mix tracks manually, this is also an option. The musicians can decide what they want to be heard on the final recording: all instruments or only viola part? Perhaps they would like to quieten the piano slightly and move a cello to the back to hear the violin more prominently. Perhaps they believe it’s a good idea to mix together cello and piano? Or instruments aside, want to catch a little more reverberation of the room? The users might even delete selected instruments from the recording. This could be a useful opportunity when a cello e.g. plays out of tune or if the pianist wants to make “an instrumental karaoke”.

Zylia is a microphone and software in one. To be precise, it is a set of 19 microphones in spherical enclosure that records 360-degree sound, whereas the software part (Zylia studio) is accountable for the sound processing. 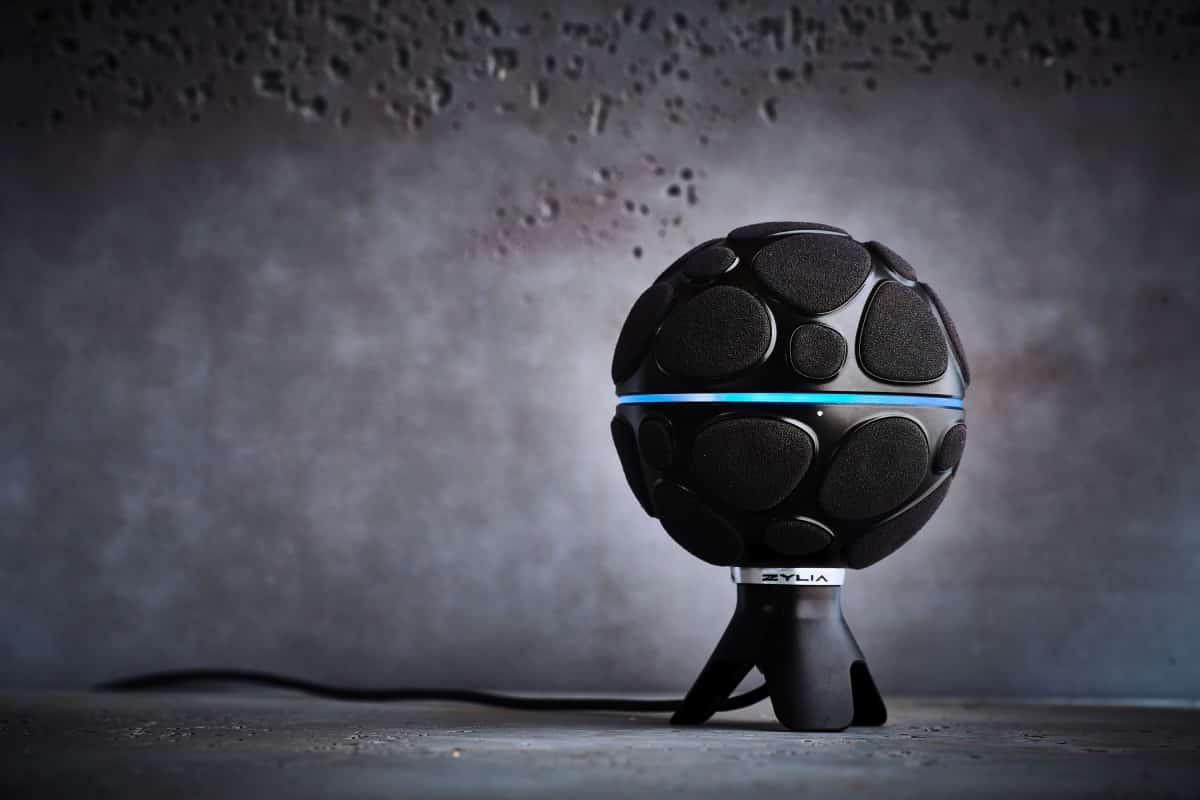 “We represent sound in a unique way, since the sphere surrounding Zylia can be divided into tiny segments. Therefore, as a user, you have the option to decide what it is what you would like to hear, the whole sphere or fragments of it” – explains Żernicki.

After recording, users receive several tracks. When recording musical instruments, they will receive recordings of each individual instrument.

“Then, the system equalises the volume based upon the tracks’ sound level. For this process, sound engineering and mixing techniques are being used. Zylia’s CTO explains there are many possibilities: “For example the option to have the vocal recording in the middle and the guitars all on one side.”

Zylia started out as a research project. Six years ago, the founders received a grant to develop a system for virtual sound stage reconstruction using wireless sensor networks. Eventually, the developed system turned out to be too complicated to commercialise, but this is how they came up with the idea to combine all the technology into one device. Back then, this was a dream. The Zylia founders have repeatedly heard it could not be done.

Fortunately for the company, there were a few people who believed in the project. These were mentors from German and Danish acceleration programmes (EuropeanPioneer run by Etventure and Next Step Challenge run by Nupark Denmark) who helped transform their scientific project into a commercial business model. It took them almost three years before the final product was released. The company produced 10 functional prototypes and tested them with more than one hundred music professionals, all over the world. At the end of 2018 Zylia emerged on the market.

There are three significant groups purchasing Zylia. Firstly, musicians of various styles, but many of them performing folk music and bluegrass. Secondly, people who prepare audio records for movies, games, videos etc. The third group consists out of people who work with the ambisonics method. Ambisonics is a full-sphere surround sound format invented in the 1970s, and has made a comeback in Virtual Reality and 360° movies.

Zylia was created to keep the musicians’ energy alive. Now, its founders want to go a step further and bring artists and audiences closer together.

“Imagine that while being seated in your room, you have the ability to experience a concert of your choosing. That you can even choose to be positioned among the crowd or on stage, hearing the musicians’ interaction. Now our aim is to create this technology, that will record live concerts from several positions, so it can be enjoyed by the audiences” – says Żernicki.

Sounds impossible? Well, they said Zylia could not be done, and look at it now.

A step towards a green transition in Poland
Poland must quit its coal addiction, or nothing will come of…
Offshore wind in Poland: a potential output of 28 gigawatts
Small nuclear power plants are gaining traction
Today’s garbage. Tomorrow’s dessert?
Miniature electrocardiogram device fits in one's hand