Through a partnership with Scroll, Innovation Origins (IO) wants to increase its impact in the United States. The English-language website of IO (which operates in addition to Dutch and German versions) has already been able to gain a strongly growing interest from the U.S. in recent months; Scroll is expected to foster a further expansion. After a pilot phase of two years, Scroll officially went live at the end of January with a service that offers ad-free journalism at a subscription fee of 5 dollars per month.

USA Today, Slate, The Atlantic and Buzzfeed are among the more than 30 brands Scroll partners with. Innovation Origins is the first non-American brand to be added as a partner. “And we’re pretty proud of that,” says Bart Brouwers, co-founder and CEO of IO. “Not directly because we expect a huge new turnover, but much more because this is a new proof of our substantive relevance to an American audience.”

Innovation Origins was founded five years ago as a platform for the story of innovation from the city of Eindhoven. Two years ago, IO made the leap to Europe, including a branch in Munich and its own reporters in nine European countries. Brouwers: “For us, this was the logical step in scaling up a local player to a platform that specialises in the story of innovation, wherever it comes from. Our focus remains on the people and organisations involved with solving the problems of today and tomorrow, with the aim of giving our audience an impression of what our world could look like in a few years’ time. ‘Your Sneak Preview of the Future’ is our slogan for a reason.”

With the European expansion and the addition of Apple News as a publishing platform in major English-speaking countries, the English-language site has gradually become more and more important for Innovation Origins. Since the end of last year, the U.S. also represents the largest audience: more than forty per cent of IO’s reach now comes from America. The Netherlands is second on that list, followed by Germany and India. “It has not been a strategy to have such a large part of our reach to come from America,” says Brouwers. “But now that it’s grown so much, you want to do something with it, of course. Not so much in our journalistic focus, because I think it’s exactly this European focus of ours that makes us attractive to Americans, but in our business strategy. The partnership with Scroll is the first result of that, but certainly not the last.”

Scroll, an initiative of former Chartbeat-CEO Tony Haile, received a lot of attention in the US at the start last month. Haile’s motto: “We wanted to think about what would the internet look like if ads never existed.” To a certain extent, his initiative can be compared to the Dutch Blendle, which also provides paid access to news brands. The big difference is that Blendle focuses primarily on print titles and converts the articles within those papers to web pages, which can be viewed at a subscription price of 10 euros per month. Initially, separate newspaper articles were also offered, but Blendle aborted this service last year. Newspaper articles can no longer be used indefinitely within Blendle.

Scroll focuses on existing websites. What makes Scroll special is that it uses a cookie to filter out the ads that are normally shown on the websites of these news brands. This gives the user an ad-free news environment. With its own app, Scroll also provides a pleasant experience on mobile. If you open a page of one of the Scroll partners via this app, you will see a bar at the very bottom that tells you that you have accessed this web page via the Scroll app. For many articles, an audio version is also offered via this bar. For IO this will be fixed at a later stage, at the moment the Scroll technicians are still fine-tuning.

Scroll gets to keep $1.50 for every $5.00 subscription fee: this corresponds with Apple’s model, which also pockets one-third of sales. The rest of the amount – $3.50 – goes to the publishers. The exact amount per publisher is based on reading time: for example, if a certain user spends 10% of his reading time in one month within Scroll on Innovation Origins, then 35 cents goes to Innovation Origins. If that is 50%, then IO gets $1.75. Users can see the actual distribution in personal overviews. This is what it looks like: 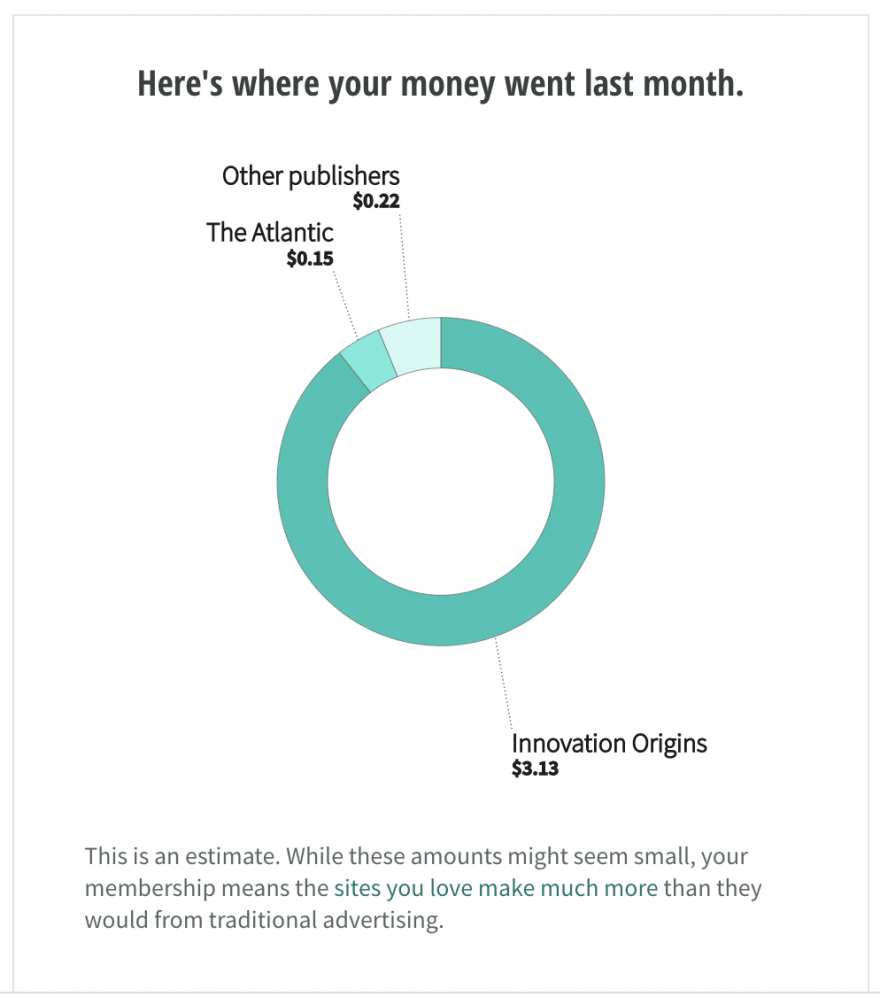 Scroll says that this system allows a publisher to earn more than through traditional advertising. Whether this will also apply to Innovation Origins, we will, of course, monitor closely.

Dutch Medtech Factory Twente expects first companies in its…
Intercultural Dialogues between Dutch and Chinese…
Fontys lectorate Move to Be gets young children moving
Corona in Europe - Why is the Netherlands in lockdown?
The Netherlands is an export land for electrolyzers - 'But…
'A university is not a patent machine'