“We are going to create a ‘ National Park Eindhoven’. In the middle of the city centre, mind you.”
In a whirling pitch, in which he radiated the pleasure about his mission in every sensible way, City Centre Supervisor Winy Maas gave a preview of the “captivating inner city” he sees in front of him with Eindhoven.

In order to get its audience – apart from the members of the Eindhoven city council, a hundred or so more people had arrived at the presentation in the town hall – in the right position, Maas starts with the pictures that everyone recognizes. Small red stones all around, but also slates, bricks and here and there he even discovered real bathroom tiles on the streets of Eindhoven. And poles, poles, poles. Poles to stop traffic, to fill holes and, really, poles to protect poles. “When you pay attention to it, you’ll get completely crazy about it: as if poles always have to be placed in pairs. Honestly, even at Gamma they don’t have as many different poles as in the Eindhoven city centre.”

The logical question then follows:”What do you want? Will you continue to fill the inner city with yet another new tile and a yet another new pole? Winy Maas does have an alternative. Hikeywordsds: make the centre bigger, make it lighter, give it some water (“no, no canals, but beautiful and logically integrated drains”), ensure zoning with sidewalks and paths, use the enormous design power of this city, but above all: make it greener. “In the inner city there’s hardly a tree to be discovered, Eindhoven really has the least green city centre of all major cities in this country. Yes, outside the ring, there are beautiful parks, but inside there is nothing. We are going to dip the whole city centre in green. More than that, I promise you a bombardment of green!” 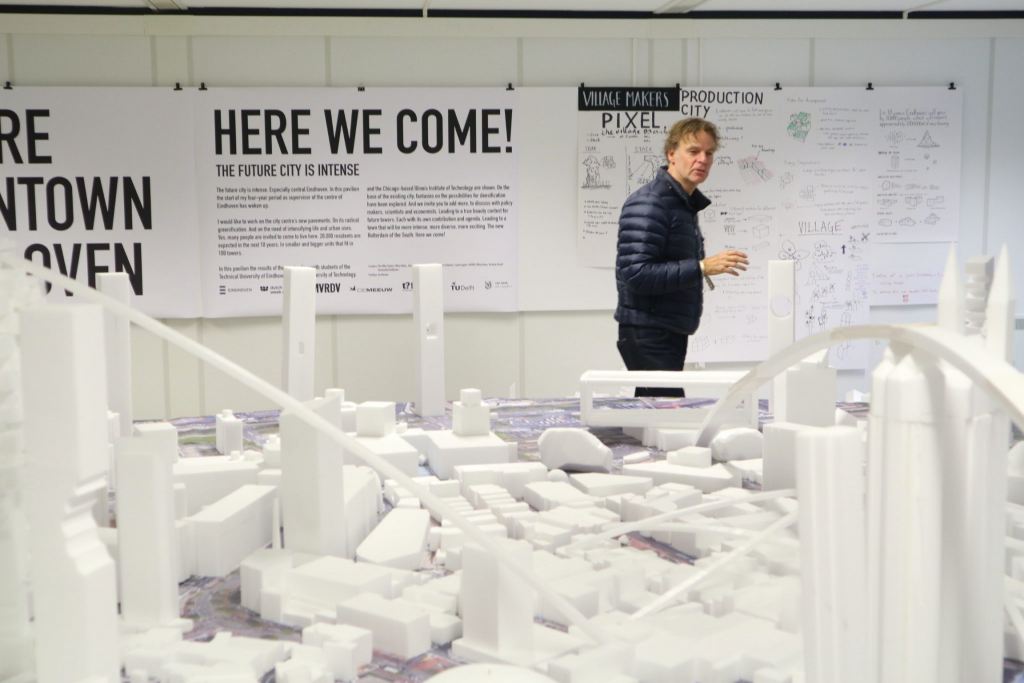 heWhat, according to Maas, can help in this respect is a “carpet through the entire city centre”, meaning a something uniting which is not there yet. “The carpet ensures unity, innovativeness, and accessibility. It helps to get better definitions: where do you drive or walk and where not? It makes the centre open and safe. What helps are special squares, water storage, integrated light, places where you can find pleasure. And it could also be a bit quieter. Eindhoven is not yet Amsterdam, where 20,000 wheeled suitcases are constantly rolling back and forth, but still.”

And oh yes, it has to be very green. Did I say that already? “We are going to create a ‘National Park Eindhoven‘. Right in the middle of the city centre, mind you. Everywhere you look, there will be greenery against the buildings, large plant areas on the streets. The question we did encounter is which trees really belong to Eindhoven. No elms, they are for Amsterdam. So why don’t we take the Strabrechtse Heide to the inner city?”

What follows is a series of images with designs, combinations of materials, lighting options. Streets consisting of solar panels, a lifted Catharina church (“maybe we can use those red stones for that!”), large stands to sit upon. He assures the city councillors that all of his views are ‘just for inspiration’. Then Maas becomes serious again. “How about an investment fund? This way, the city has a profit potential of 350 million euros. We can then spend that money on parks, a beautiful railway station, the Dommel, social housing, and so on. Dear councillors, you have the opportunity! With a good fund manager, you can tackle everything. If I were to take part in the elections, I would argue in favour of it. But hey, I’m just a designer.” 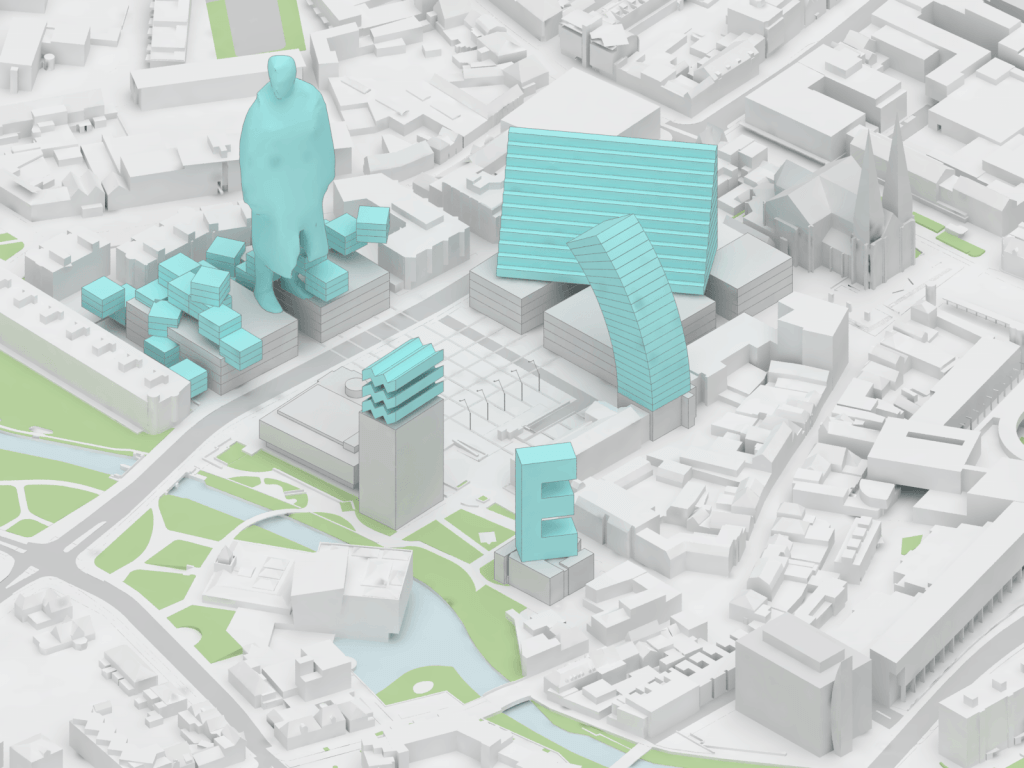 Winy Maas has already done a special study for the Stadhuisplein. “Exactly as big as Times Square, but with a few differences. Look at these two squares and ask yourself which city calls itself ‘the City of Light‘?” Laughter all around. “Turn it into a dance square! Adapt the floor to the occasion – sometimes with the Braban flag, sometimes with the Albanian, when the Prime Minister of that country is here on a visit to look for investments, for example. This is the beginning of many development opportunities. There is not yet a clear picture, so now is the moment.”

Maas shows his audience the boredom he feels when walking the current square (“just offices….”) and paints the option of a square with small extra cross streets. “This makes it much more intimate. And there are enough options for the environment. A large staircase like in Rotterdam, buildings like terraces or sugar cubes, high-rise buildings in the form of the letters of the name E.I.N.D.H.O.V.E.N. Wonderful, you’ll get the city as a gift!” 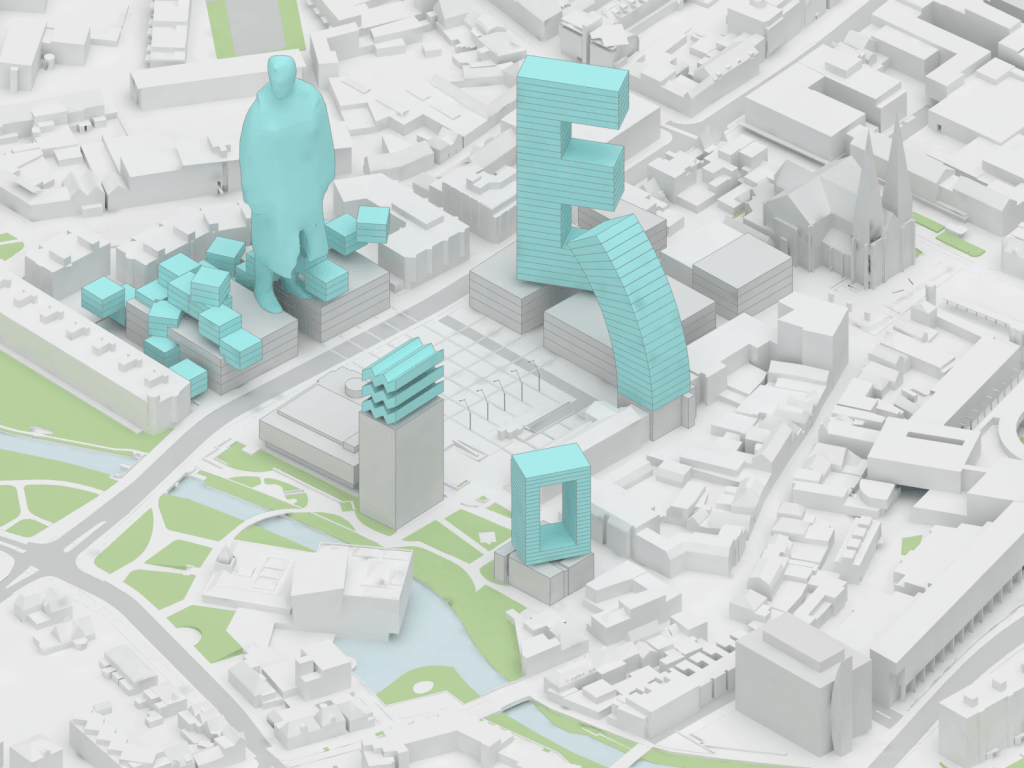 Time for priorities. “What are we going to do first? The Vestdijk of course, that is already a test area. Soon there will be strips of pavement with which Eindhoven residents can test the future for themselves. What is fine? What works? What not? In addition, there will be proposals for the compacting of the inner city. And the greening of it, of course. Truly, believe me, we’re going to make this ‘the Eindhoven National Park’.”

Next week, Winy Maas will be back in Shenzhen, but he is very happy with his position in Eindhoven. “Here I have sensed energy. This city is very different from all the others. That is its strength. I’m still your Inner City Supervisor for another four years. Unless you don’t want me to. In that case, you can send me away right now.”