For me, the past decade has made many dreams come true. Solar, wind and electric vehicles broke through. I’m building a beautiful energy-positive house. Plus I got the chance to lead a massive scientific project called NEON that I dreamt up which can really accelerate the energy transition. Looking forward, I think the coming decade will be the one where we finally accept that it is entirely technically and economically feasible to have an earth where every human being is incredibly healthy, wealthy and happy. We can have our cake and eat it too once we get our act together.

Too often, people think of wealth as something that you have to refuse to one person in order for another person (you!) to be able to have it. This is a fallacy. In this article I would like to point out why.

To visualize what I mean I like to use a concept developed by Kate Raworth called ‘doughnut economics’. The picture shows a ‘doughnut’ and within it are the things we humans need or want in order to be happy. Outside the doughnut you see what she (and many others) call the planetary boundaries. Her point is that a sustainable economy should stay within the doughnut. My point is that we can keep endlessly expanding the stuff inside the doughnut without crossing those planetary boundaries. And I think this will become obvious to most people over the coming decade. Let me give some examples. 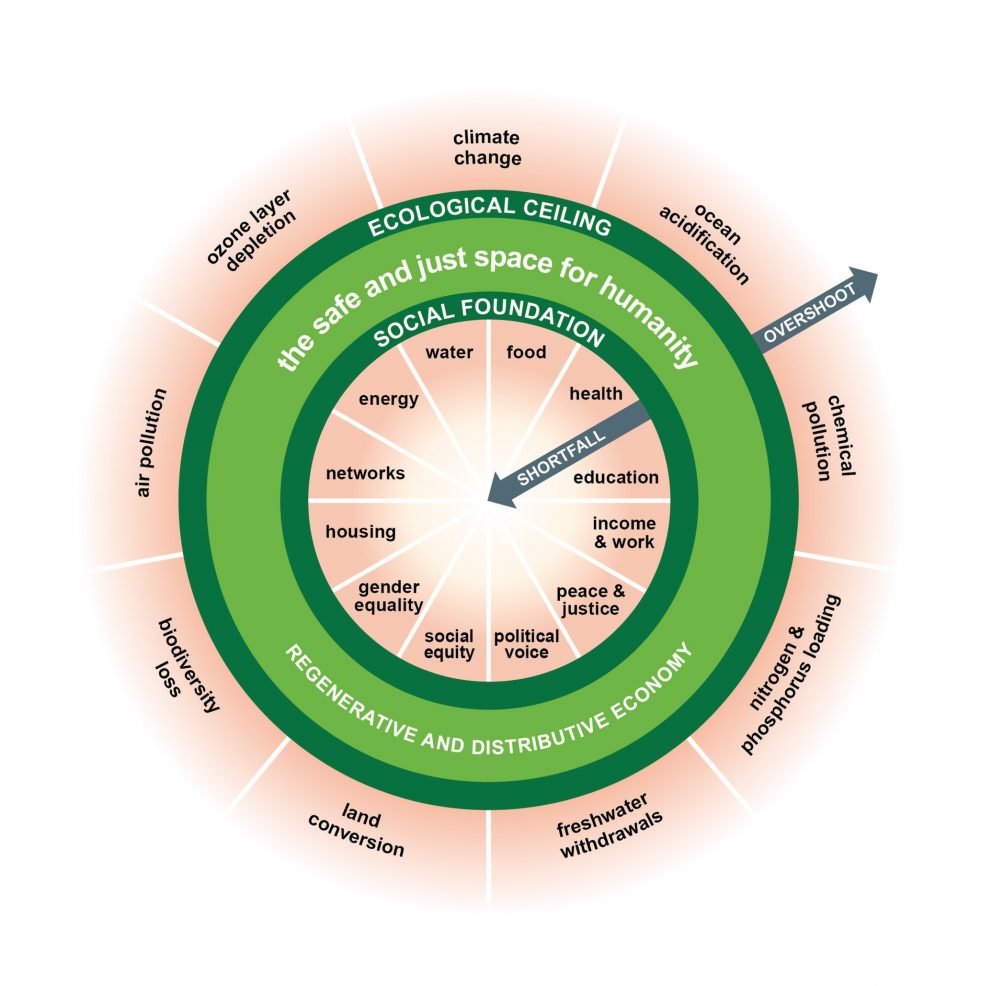 Energy is an area where we have seen tremendous developments in the past decennium that will consolidate in the coming decade. Last month I participated in a lengthy twitter discussion with many energy and climate scientists (summarized here) where I found out that until very recently, the IPCC used a business-as-usual scenario where we would use six times more coal by the end of the century than we use now. As an energy scientist I know how extremely unlikely that is. Coal use is plummeting in developed nations and even presidents promising to revive the industry are unable to do so. (This is not only good for the planet but also creates more jobs over the coming decades because putting solar on roofs takes more manpower per kWh than coal mining does.) 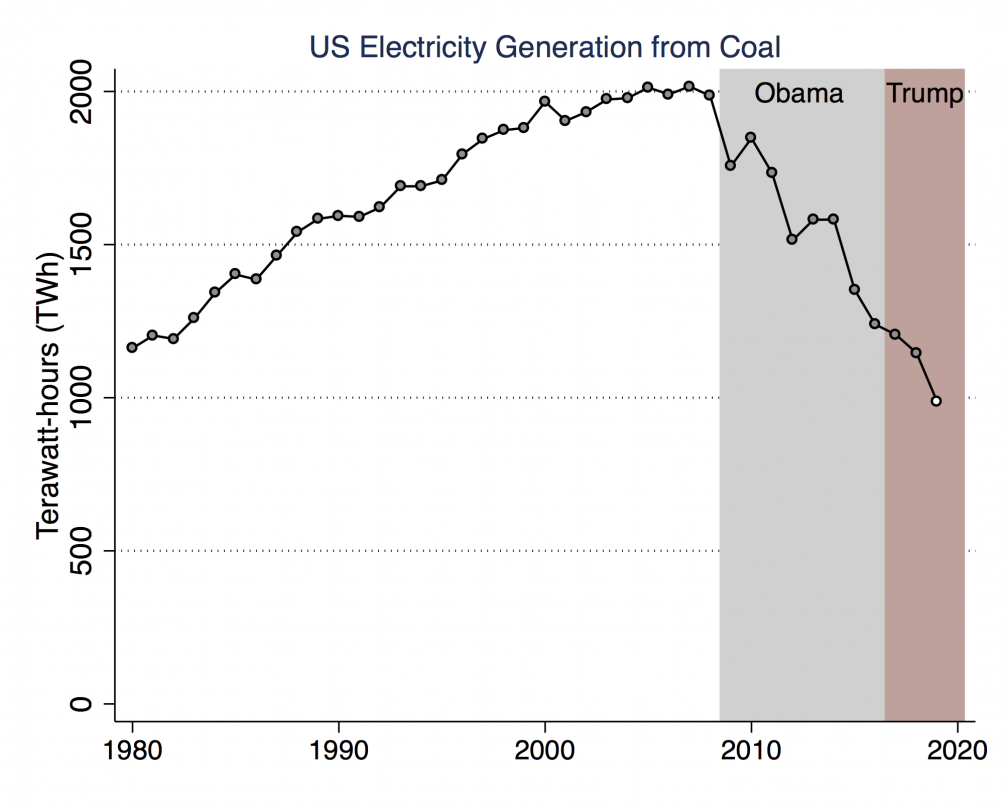 Inputting conservative ‘no policy’ scenarios from the IEA show that business as usual no longer takes us to 3 to 6 degrees Celsius of global warming, but 2 to 4 degrees. That’s still bad, and we should really try to get down to 1.5 degrees and that will be hard enough. Yet it is still a remarkable improvement. We are doing something right. I think the main reason is that we have managed to reduce the price of renewable energy.

When I observed in 2007 that solar was poised to become cheaper than coal this was still a very strange idea to many. (I still recall the editor of the paper essentially saying this could not be true.) Now, many scientists envision a future where we are powered primarily by solar panels and windmills that are all made with renewables. Which also use batteries and hydrogen to provide storage. Carbon emissions from a solar panel which was made with energy from solar panels would cause emissions to drop to almost zero.

I think solar panels will be integrated into roofs. This makes roof tiles superfluous and reduces material requisites to close to zero too. (I’m building a house with a roof where solar panels provide the sole waterproofing, apart from a few windows and gutters.)

So, the sun gives us the energy that we need thousands of times over. And we can get it at ever lower costs and with a negligible use of materials. Consequently, energy need not be scarce or problematic once we get our act together.

It is not only the supply side of energy that is improving. On the demand side, we have heat pumps that generate 4 or 5 times more heat than they use electricity. Cooking with induction is faster and uses less energy than gas and allows us to integrate renewable energy sources. And lighting was one of the success stories of the past decennium. I remember the resistance back when people thought their incandescent light bulb was threatened. But nowadays you can’t even buy them anymore. Nobody complains because you have LEDs that look just as nice. They’re very affordable and use far less energy that they end up saving you much more money.

For my new NEON project, I want a NEON sign, but NEON is an energy hog. To my delight you can buy ‘NEON signs’ the use LEDs. These are almost indistinguishable from real NEON except that they use five to ten times less energy.

I think LED lighting illustrated a fundamental misunderstanding. People cling to dirty technologies when new technologies force them to change in a way they don’t appreciate. As they do that, they make up all kinds of arguments explaining they are emotionally attached to the old technology. And why transitioning will be slow because of these emotional and cultural reasons. But these arguments turn out to be vacuous as soon as you offer them a technology that lets them keep the comforts they like. Then change is swift.

Many of you know me as someone who debunks the myth that electric vehicles secretly emit more CO2 than internal combustion cars. (They don’t: when you do the sums right, they already emit less than half the amount of CO2 and in a future where mining and battery production are running on renewable energy, their emissions could essentially start to drop to zero.)

When I wrote my first book on electric vehicles, just before the start of the previous decade, most people thought it was highly questionable that electric vehicles could be successful. Over the past month I featured prominently in the Dutch car lovers’ magazine ‘Autovisie’ as the man who saw it all coming. There are few things for me personally that could be a better illustration of how electric vehicles became mainstream over the past decade.

As with LED lighting, people made up all kinds of roadblocks. Like, it was a no-go if charging took even a minute longer than fueling gasoline. A range of less than 700 km was unacceptable. No serious car lover would want to drive a car that did not emit loud engine noises, et cetera. But these roadblocks turned out to be pretty unimportant once electric vehicles reached more than 300 km of range. And the driving experience turned out to be nicer than expected.

Once the retail price becomes lower (in 2025-2030) and people become aware of the lower monthly costs (4x less energy and hardly any maintenance), I predict that the coming decade will see electric vehicles easily overtaking combustion cars when it comes to new car sales. And all of a sudden people will realize that the engine noise was a bugbear, not a feature. As with LED lighting, when you offer superior technology, resistance to change evaporates.

Without food we all die. Limits to food production have always fascinated doomsayers. Malthus is a famous example. Right now things are moving in the wrong direction. What with aquifers drying out and rainforest being cut down for cattle or cattle feed. But that will change. The biggest change will be that we will move beyond meat.

Meat has become a kind of travesty. Around 86% of all land mammals are now either livestock or humans. Livestock uses 80% of farmland but produces just 18% of food calories. Moving beyond meat could reduce our use of agricultural land by 75%. To give one example: a Beyond Meat hamburger uses 99% less water and 93% less land. And in what I consider some very good news to kick off 2020 with, the company Novameat claims that they are now able to recreate the texture of steak.

Some people claim they will never eat something that looks and tastes like meat but doesn’t come from an animal. Because it is ‘unnatural’ and they want ‘real’ meat. I think that standpoint will be ridiculed by the end of the coming decade. When people can buy healthier and cheaper steaks that look and taste just as good as the real thing, they will jump at the chance. Once they realize that they don’t have to change their behavior, they’ll see that the slaughterhouse is a bugbear, not a feature. I predict that the coming decade will not only be the decade in which we clearly start to move beyond burning fossil fuels, but also the decade in which we move beyond meat.

Our ingenuity allows us to easily live within this world’s planetary boundaries, even with twelve billion wealthy humans. The only question is: will we get our act together? I think we will and I think the coming decade will prove that.