Houses that come directly from the 3D concrete printers are still in experimental status, but ultimately this phenomenon could greatly simplify the construction sector. A project has just been completed at the Technical University of Graz in which future application areas for the technology have been tested. The leitmotiv was the resource-saving use of building materials.

TU Eindhoven, BAM and Beamix are also busy developing houses from a concrete printer. Read the state of affairs here.

Many research teams are working on 3D concrete printing and all have similar problems, says Stefan Peters, head of the Institut für Tragwerksentwurf at the TU Graz. The most important points of interest are the composition of the concrete and the type of machines that can be used for 3D printing. If these problems are solved, the technology has the potential to change the building industry, so the scientist.

He has his own research group in an interdisciplinary team that aims to make better use of the full potential of 3D concrete printing. Concrete is the most widely used building material worldwide. Large quantities of fossil raw materials such as coal and oil are used in the production of cement and steel. “According to current calculations, the fossil raw materials coal and oil in their present form can only be used for another hundred years. In addition, large quantities of CO2 are released during the production of common building materials. Using resources more efficiently can save a lot,” explains Peters.

Conventionally, prefab concrete parts are manufactured in the shell construction. This is a kind of casting technique: liquid concrete is filled into a pre-built formwork and solidifies into the desired form. The process is simple, fast and reliable. The manufactured components are very robust. The problem with the process is a lack of flexibility, resulting in high resource consumption and limited design possibilities:

Peters mentions a classic ceiling element that is used throughout Europe for millions of square metres as an example of the shell construction method. It has a thickness of about thirty centimetres, a span of about eight metres and is supported by load-bearing elements.

This ceiling element was one of the two case studies in the research project. In 3D printing, individually planned elements based on a digital model can be implemented. Peters and his team considered where they could finish with less concrete without sacrificing performance.

In the second case study, a graceful facade part that could not be produced in a formwork system had to be printed in three dimensions. The basis for the research project was the mathematical examination of the two elements and the testing of economical use of raw materials. Then the routes of the print robot had to be accurately calculated. “It’s like drawing a house without removing the pen from the paper”, explains Peters.

In this fundamental research project, an interdisciplinary team of architects, engineers, mechanical engineers and materials technologists conducts research. It also involved industrial partners, who together represent the entire production process of a precast concrete element.

A printer was built to test the new construction technology. The appropriate print head was developed in cooperation with a business partner. The concrete mixture was positioned dry in a large bag, processed by a screw pump and transported to the printhead via a long hose. The printhead injects the concrete.

The challenge was to optimize the printable concrete mix and especially to achieve a pumpable consistency. “The concrete must be able to be transported continuously through the print nozzle and must not stick, even during short breaks. At the same time, it must connect with the previously applied layer upon arrival at its destination”, explains Andreas Trummer of the Institut für Tragwerksentwurf of the TU Graz. Meanwhile, a nice mixture has been found. The coarser parts have a maximum diameter of three millimetres.

Also, the connection between the individual concrete slabs could only be established after several attempts.

By mid-November, all problems had been solved and the team was satisfied with the results of the first compression tests at the Institut für Konstruktiven Ingenieurbau.

It will take some time before every house will be built using a concrete printer. “We as TU Graz are at the forefront when it comes to the future application areas of the new technology because so far little attention has been paid to this,” says Peters. Follow-up projects are already planned. 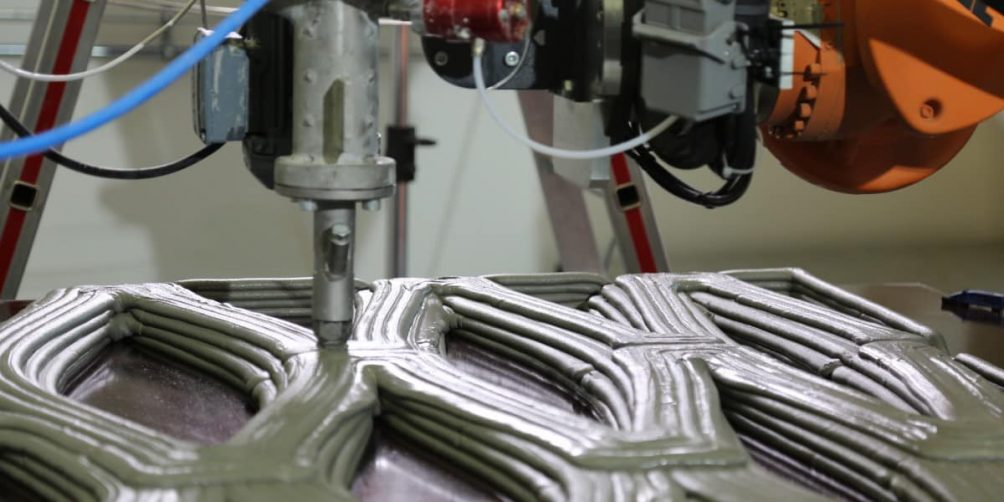