Buildings of the future will leave a small footprint and be a sight for sore eyes at the same time. That is what the fifteen student teams from countries ranging from Europe to Taiwan showcased at the end of July during the Solar Decathlon Europe. The students were challenged to design efficient, innovative buildings powered by renewable energy. The Karlsruhe Institute of Technology (KIT) won the competition. But Team VIRTUe from TU Eindhoven also won a prize and managed to clinch second place. Press Officer of VIRTUe, Rody Mens, looks back on the special competition that took place in Wuppertal this year.

Unfortunately no first prize, but you finished high on the scoreboard. Did you expect that?

“We looked at all the houses beforehand, so then you get a first impression. But a lot of elements that the jury evaluates, such as the heating system, are things you can’t see from the outside. It was really exciting right up until the last minute. I heard that the competition was also much more dynamic than during previous editions. In Dubai, three years ago, after a few days it was basically already obvious who was going to win. So, that was not the case this year. But despite the competition, there was a very friendly vibe in the air. For example, if the roof of one of the teams collapsed and the construction process was too slow at another one to get it finished on time, then all the other teams who were already ready were on hand to help.”

On what points did the jury score the buildings?

“Among other things, on the level of comfort, energy efficiency and architecture. The categories are in turn divided into subcategories. For example, solar panel system integration and lighting design fall under architecture. Comfort is broken down into temperature and air quality, for instance. In the end, all these different points add up to a total picture of sustainability. The ultimate winner has the highest score.”

What did the judges think was particularly good about your house?

“Compared to all other teams, we scored best in terms of house functioning. That takes into account, for example, electricity consumption, such as heat consumption, but also user-friendliness. We also were awarded a number of second and third prizes. In addition, we won several prizes that were not part of the competition but were, for example, set up by branch associations. As an example, we received a second prize in the field of interior design. We also received a lot of compliments about this from other teams. They said that both the interior and exterior of the house look really good.”

And what do you personally think are the most unique features of the home?

Personally, I think the finish of our house turned out very beautiful. For a start, our roof concept is unique. We want to make sure that more greenery returns to cities. That’s why we set up our roof with a water collection system so that plants can thrive. That looks really nice, even if I say so myself. The solar panels are also sleekly integrated into the sides of the house. It would be a shame to see blue solar panels everywhere in a city, once you choose to make a city more sustainable. We are demonstrating that you can incorporate them aesthetically into the design of a home.”

“What is also special about our house is the EQUI-Librium. This is a system, connected to the solar panels and other devices in the house, that can make predictions about what time of day will generate the most energy. This takes both meteorological data and energy consumption from the past into account. Based on this, you can then, for example, do a load of laundry at the right time. By doing this, you reduce the amount of electricity you have to send to and from the grid and you become more sustainable. We have also developed an app to make sustainable living more tangible and accessible to everyone. You can find it in the Google Play Store. In this app, you can take on challenges that are specifically tailored to your individual sustainability needs, for example, showering for shorter periods of time and using less electricity.” 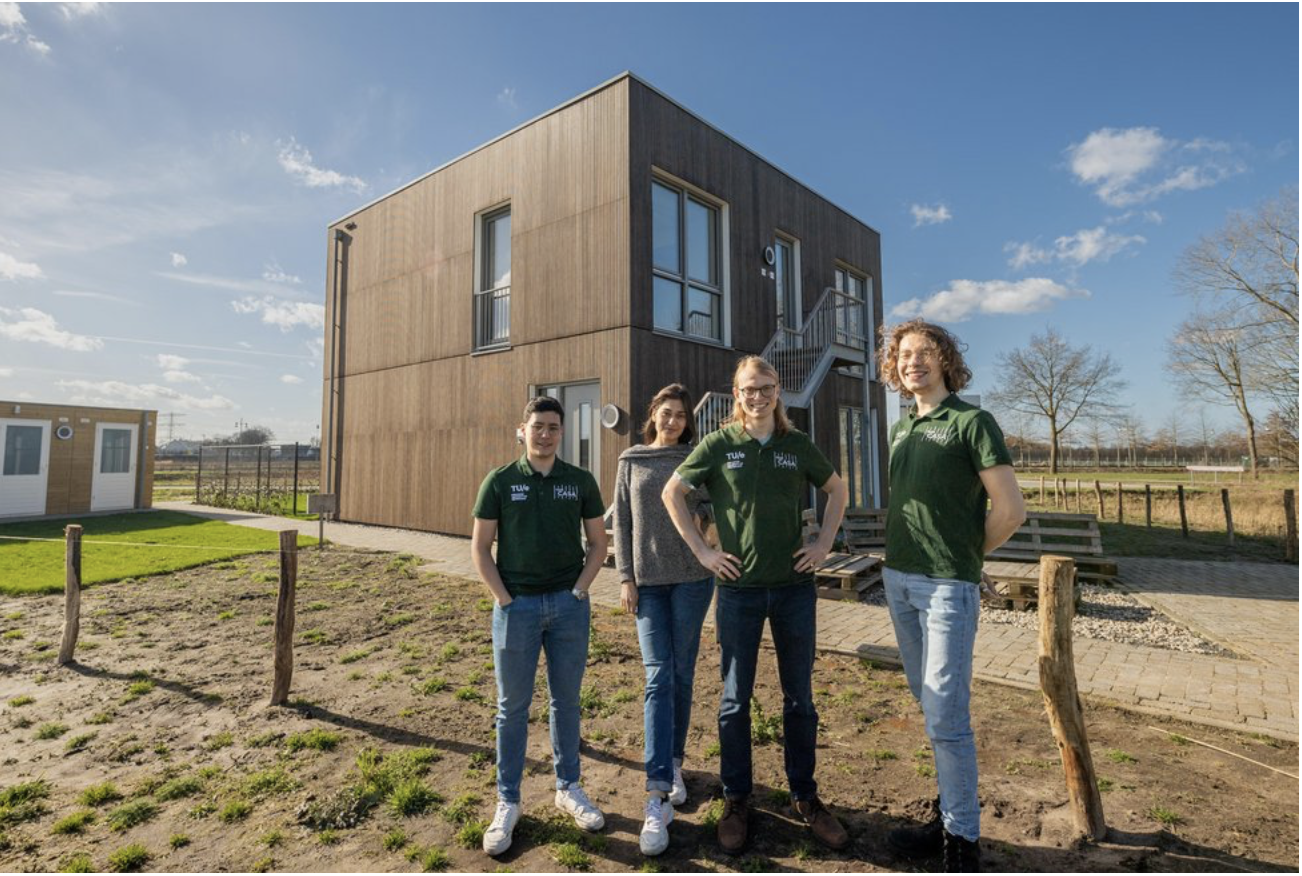 What was the high point of the whole competition?

“At one point, two little German boys wanted to look at our house. When they came walking around the corner right behind me and saw our home for the first time, I heard their footsteps stop in the gravel. ‘Oh, das hier ist wirklich schön,’ they said then in amazement. I found that really very nice to hear.”

Where will you make improvements in the coming period?

“Soon, we will be taking part in Living LAB 040, a kind of living lab in Eindhoven where hundreds of innovative houses will be located and where people can temporarily move into a house. We are very much looking forward to that. And since we have gained momentum, we are carefully considering whether it would be possible to set up a start-up with a number of motivated team members. This would allow us to create a bigger ripple effect, showing our sustainable innovations to the world on an even larger scale. We will be giving this further thought in the near future.”

Adaptive and attractive - students design a sustainable…
Students compete to really make a difference with their…
This solar panel weighs 50 percent less by replacing the…
The engineers of tomorrow challenge their ideas at the TU/e…
Disposable plastic largely banned from 2024 onward:…
'Universities should build a Silicon Valley around…