In a weekly column, alternately written by Lucien Engelen, Mary Fiers, Maarten Steinbuch, Carlo van de Weijer, Tessie Hartjes, and Auke Hoekstra, Innovation Origins tries to find out what the future will look like. All six contributors – sometimes accompanied by guest bloggers – are working on solving the problems of our time. Everything to make Tomorrow Good. This Sunday, it‘s Mary Fiers’ turn. Here are all the previously published columns.

Yes, “Heat Causes Casualties in Eindhoven“. Perhaps these kinds of headlines in the newspapers and on social media can shake us up. This is necessary because heat stress and all the negative health effects are not high on our priority lists. Why not? Because global warming is slow and therefore infiltrating our society reasonably unnoticed? Because the cause and effect are not as clear as in the case of road deaths? Because a warm summer mainly evokes a positive image of holidays, leisure, children playing and ice creams? Or because we don’t think we can do anything about it?

There is cause for concern. The KNMI states that it is likely that we will have to deal with more and longer periods of tropical temperatures in the future. In 2050, it will approximately double compared to 2011. The CBS has published research that shows that mortality increases with the rise in temperature. And not just a little bit. As a rule of thumb, every degree warmer than the long-term average on a summer day results in an additional 30 deaths per week. For the Netherlands as a whole, heat deaths increase by about 12 percent.

High temperatures particularly affect the elderly, children and people with lung disease. During the heat wave in 2003, according to the CBS, between 1400 and 2200 more people died in the Netherlands as a result of higher than usual temperatures. You read it well: between 1400 and 2200 people died. Let it sink in for a moment. The consequences of heat waves are serious.

Heating in the city

The past few days it wasn’t that bad, but in the last few weeks we’ve had some very hot days. I do not know how you all cope with this, but I do not like these high temperatures at all. Just give 20 degrees and a nice breeze. I certainly don’t need more than 25º. During such a heat wave there are also many news articles about climate change. That makes it even warmer for me. Typical case of heat stress. It also causes me to work less efficiently. So heat is not good for my productivity either. I suspect that is the case for more people.

Differences can be explained by the spatial planning. In short, the more buildings and roads there are, the warmer it gets. The less green space and water, the warmer. Because of the buildings, there is often less wind. As a result, the heat remains for longer and the temperature remains high for longer as well. Air conditioners and traffic, activities in which heat is released, make things even worse. As a result, some parts of our city turn into a real heat island.

The municipality must take heat stress into account when (re)designing the city. How? Where possible, we need less asphalt, fewer stones, more greenery and more water. Nice cool green-blue oases between the buildings. And making the most of wind. Green roofs, fountains, etc.

The spacious structure of our city, with 3 large green lungs/parks, offers an excellent basis for extra cooling. But there must be many more smart natural and technical solutions to come up with. Who will take up the challenge?

Finally, as residents, we can do a lot ourselves. Reducing the heat starts with yourself. So more green in the garden, on the roof and against the facade of your houses. Fewer tiles in the garden (also helps to prevent flooding).

So get ready and start! But preferably not until the worst heat has passed – and keep drinking because we have to prevent overheating. 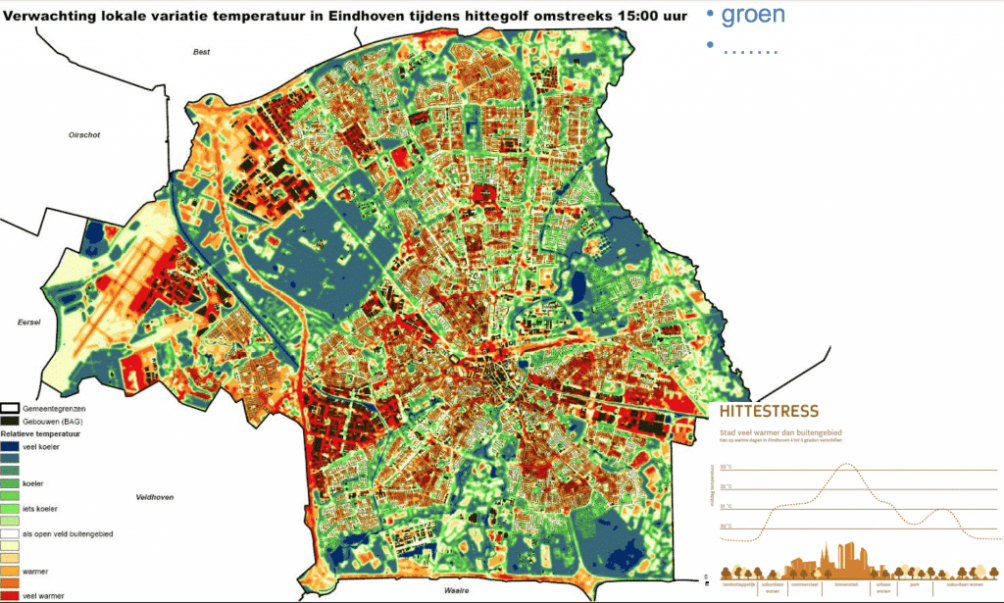 What is the ‘box’ when it comes to thinking 'outside the…
Leonardo da Vinci's To Do List
The seven patterns of AI - from technology to application
You shouldn't just ask for a grower, but just give Bart a…
Inspiring teacher must be given time to let their passion…
The value of a good brainstorm and how to make it work next…