This week, some seemingly unrelated things came together. Let me begin with Lightyear. The biggest change we have seen within Lightyear resulting from the COVID-19 situation has been a strong decline in online job applications. Especially during the month of March. The number of visitors to our careers page was at an all-time low when compared to the years before. People were literally not even looking at the page. This effect is not only caused by the increased levels of insecurity in the world but also by the simple fact that national borders were closed down for unknown periods of time. Our company has around 120 employees and 15 nationalities, many of our online applications originate from abroad. 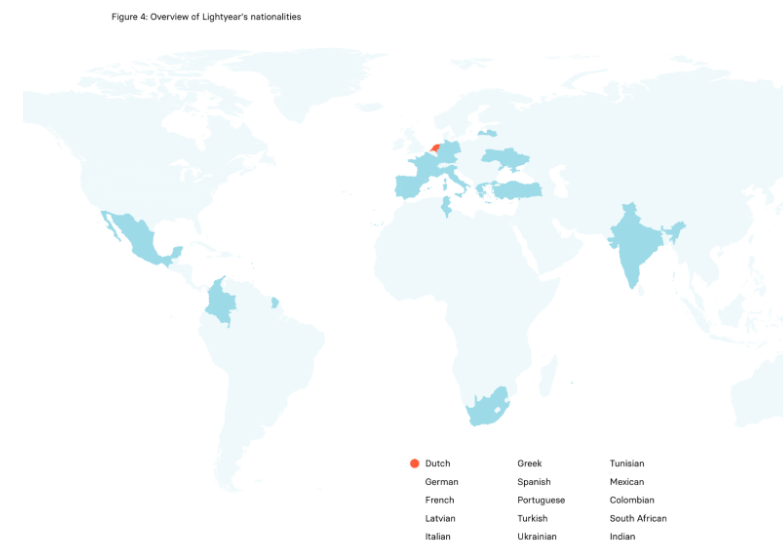 In order to counter this effect, we decided to host an online recruitment festival. We had multiple live stages where various employees explained about Lightyear in more detail and what it is like working at Lightyear. Over 400 people attended the event which led to 50% more applications. We consider the event to be a great success, in particular, because our recruiters spent 2 1/2 hours answering questions non-stop from seriously interested candidates.

I knew my judgment was biased

The reason I am telling you this is not so much in relation to the coronavirus but more to the other big topic on the minds of people this week. It is in relation to the tragic death of George Floyd. I noticed that when I was going through all the names during the event that I had a tendency to pick out Dutch names more readily than the names that sounded more exotic to me. When spotting a Dutch name, I immediately get an image of this typical student from the university of technology either in Eindhoven or Delft for example, and assume he or she studied mechanical or electrical engineering. Because I can relate so easily to that, this also favors my quick assessment of ‘interesting candidates.’ I tend to think these names have stronger profiles just because I attached an image of a typically Dutch university student to it.

This simply is an association that is less pronounced when it comes to other names. Through working at Lightyear, I have come to know a lot of very skilled people from many different countries who have names I may not even be able to pronounce correctly. I think this personal experience is the reason why I even noticed my own prejudice; I knew that my judgment was biased. It made me feel guilty – as if I was directly failing my great colleagues and all those potential candidates from other countries. It has long been proven that people are naturally inclined to favor people that are similar to them. But in the light of the death of George Floyd, this realization struck me pretty hard.

People favor people that are similar to them. People have an aversion towards the unknown. The opposite effect is therefore even more true; we tend to have a more negative attitude towards people or cultures we can’t relate to. History has countless examples of minorities being suppressed and humans have done the most despicable things to each other just because they believe in other things, have another skin color or speak a different dialect. Even if you are not the aggressor, ignorance has facilitated the suffering of these minorities as well. In this case, when looking at the riots in the US I get this feeling of: “Yeah but that’s just the US being the US.”

I wanted to be the person standing on the streets protesting. But I didn’t do that.

When looking at the images of the Dam square in Amsterdam I wondered if I would have gone to protest if I’d been aware that something had been organized. The problem is; I didn’t look for it. To me it was news. I did not start googling when I heard about George Floyd to see if there was anything I could do. I just went on with being busy with my own things. I feel a bit of shame when admitting this because I do care deeply about equality between human beings and I strongly disapprove of racism. I always try to be open to new cultures and other ways of life, try to put my own opinions in perspective and understand where other people are coming from. I don’t want to be the person that doesn’t care enough; I wanted to be the person standing on the streets protesting. But I didn’t do that.

The tendency to favor people that are similar to you is a way for your brain to ease the burden of all your decision-making during a day and to minimize your ‘cognitive load.’ They are called ‘heuristics’ – mental shortcuts that allow you to make judgments quickly and efficiently. Many of these shortcuts are taken subconsciously and although they can be efficient they can also lead to biased actions. The only way to improve our behavior is to become conscious of this. It is like a muscle; you can genuinely train it. You can open your eyes. I hope by sharing my own realizations I can help other people to further open their eyes as well.

In a weekly column, alternately written by Buster Franken, Eveline van Zeeland, Jan Wouters, Katleen Gabriels, Mary Fiers, Tessie Hartjes, and Auke Hoekstra, Innovation Origins tries to find out what the future will look like. These columnists, occasionally supplemented with guest bloggers, are all working in their own way on solutions for the problems of our time. So tomorrow will be good. Here are all the previous episodes.