The transition from fossil fuels to renewable energy is arguably the biggest operation in human history. But it’s increasingly based on secret models with a bad track record. That has to change!

For me, this journey started in 2007 (Dutch link). I was doing some research in my spare time and it struck me that solar, wind and electric vehicles were on course to become cheaper than fossil alternatives. What struck me even more, was that the predictions of ‘authoritative’ institutions like the International Energy Agency and the Energy Information Administration seemed to ignore this development. At first, it seemed unrelated to my work in computers, the Internet and mobile phones. Then I realized the similarity: I had been ‘fighting’ with ‘trusted experts’ in Telecom for the past 15 years. They had been denying the future of PCs, the Internet and mobile phones all through my career. The lesson I take from this: experts of the old cannot fathom the new.

Now I’m not arguing any loud dimwit with a megaphone should be trusted above people who have actually and deeply studied stuff for 30 years: on the contrary! I’m just saying: ‘In God we trust, all others bring data.’ So experts in the energy debate should disclose their reasoning and calculations. If they don’t, they should be shunned like the plague as this Nature article rightly states. 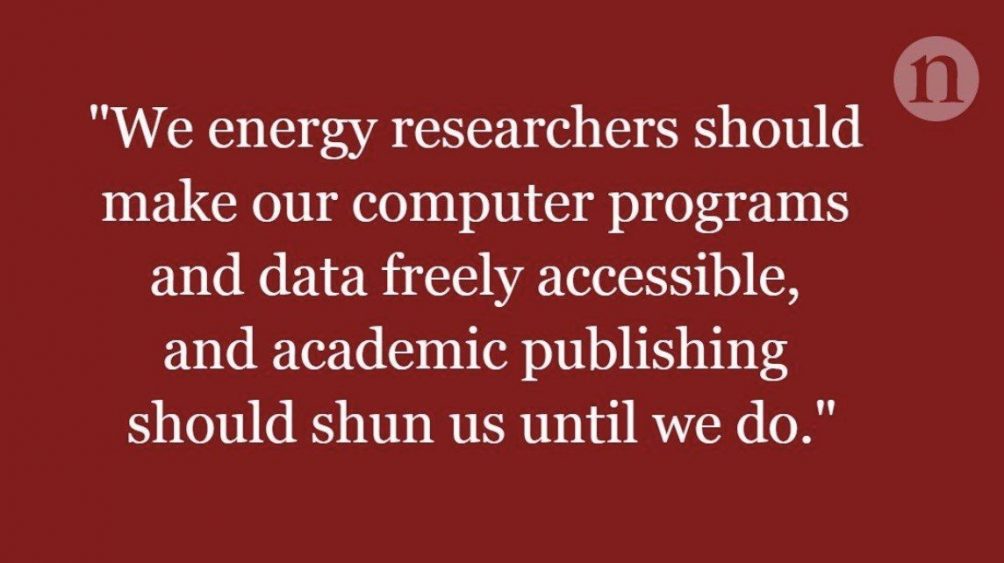 It’s hard to overstate how important this is. Science is our best way to weed out nonsense and it works because it makes scientists criticise each other’s works and rewards them if they publish mistakes. Peer-reviewed journal papers used to be enough for this and it certainly helps when anyone can read them (which is why I’m a fan of Open Access). But more and more, checking scientific claims requires access to computer code. As Joe De Carolis (a professor and leading light in this discussion) puts it: “Creating a model is akin to creating a lab and performing tests with your own approximations to physical laws.”

Recently I took an active part in a twitter discussion on this topic where Michael Liebreich launched the hashtag #freethemodels and pointed to the @openmod initiative that already has 500 members. This blog post is just another way to kindle the fire. 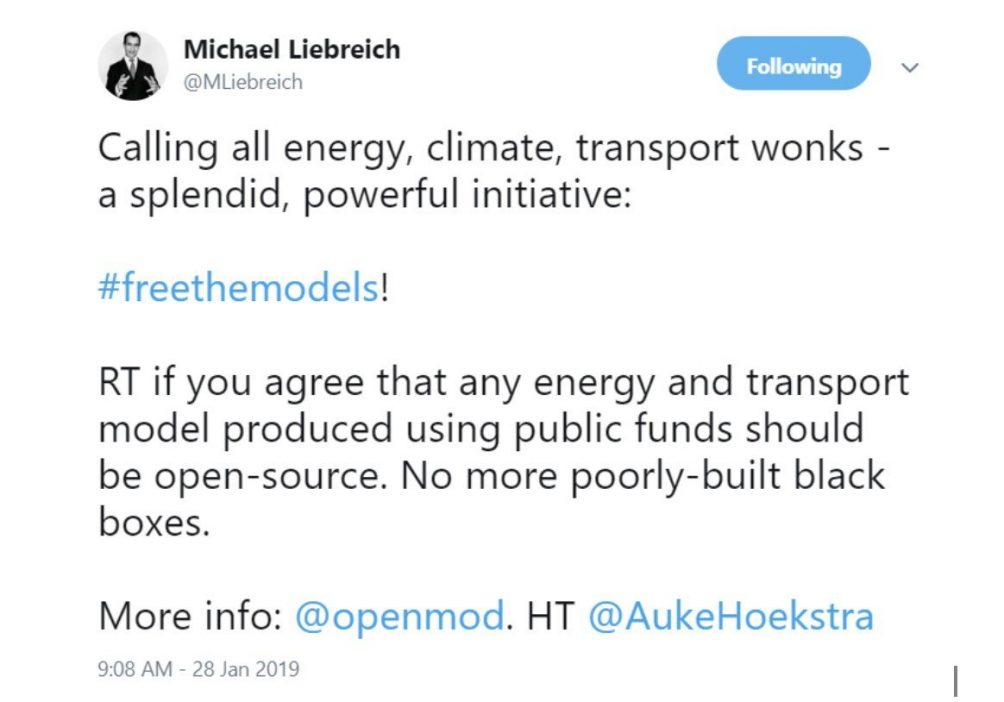 Now you might say: ‘It’s not fair to scientists to be required to just share the code they have worked so hard to create.’ But that’s also true for the wisdom they share in journal papers. It’s inherent in the deal we give scientists: we will pay you to do research but that means you cannot keep the fruits of that endeavour to yourself. Still, most Journals don’t require that computer code is freely available before accepting a publication. I think that’s an oversight that has to be corrected.

Maybe now you say: ‘Ok, let’s require scientists to share their models. But consulting firms are not financed out of public money so for them it’s different.’ But I think that in Energy their situation is highly similar. Organisations like the IEA and EIA are mostly funded by public money. That a small part of the funding comes through governments buying their reports does not materially change that. (Of course, there is also some dark money from oil companies etc. involved but that’s a reason for more transparency.) Even consultancy companies are similar in that they usually only develop models like this once some organisation gives them a contract. If that organisation would require open source as part of the contract they would take still take the contract and everybody would benefit.

You might think: ‘Easy for you to say.’ But the opposite is true. I started a company making energy and mobility models (Zenmo) and making everything we produce open source is super scary. Others might steal our code and without open source requirements for all, they might even do so without attribution. But the fact that it’s scary and potentially costly for me doesn’t make anything I’ve written so far less true.

So I hope contractors will see the value of my argument and support principled consultants by requiring open source. Without it, we have no way to use sunlight as a disinfectant and no way to determine who is right and who is wrong in the energy debate. We can no longer accept that we are led by experts that shroud themselves and their models in secrecy. Climate change and renewable energy are too important for that.

In a weekly column, alternately written by Maarten Steinbuch, Mary Fiers, Carlo van de Weijer, Lucien Engelen, Tessie Hartjes and Auke Hoekstra, Innovation Origins tries to find out what the future will look like. The six columnists, occasionally supplemented with guest bloggers, are all working in their own way on solutions for the problems of our time. So tomorrow will be good. Here are all the previous episodes.

Solar stocks and solar flows
Researchers agree: the world can reach a 100% renewable…
Electric Auke: 'BMW seeks to sustain addiction to oil with…
Hydrogen is rather the final element than a starting point…
Intercultural Dialogues between Dutch and Chinese…
Here comes the sun - how Lightyear's solar panel technology…
Manage Cookie Consent
We use cookies to optimize our website and our service. Help us to make our site better by accepting all cookies.
Manage options Manage services Manage vendors Read more about these purposes
View preferences
{title} {title} {title}