I have been obsessed by it ever since I was young: “olifantenpaadjes“, or the desire lane phenomenon. According to Wikipedia “a non-official bike or hiking trail created unintentionally by users of regular bike and hiking trails over time”. They defy the beautiful ideas of planologists and landscape architects who overlook the human tendency to choose the shortest and easiest way. Our innate tendency to light anarchism depicted in a worn pathway on the lawn. 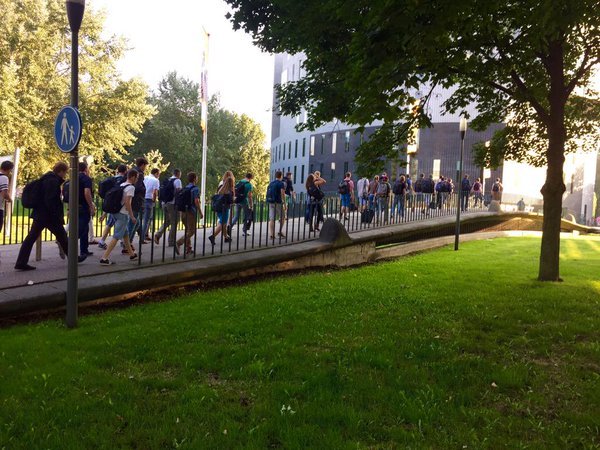 On the TU in Eindhoven, we own one of the most famous examples of a desire lane: The Limbopath. Named after the many students from Limburg, who apparently prefer to stay in their home province more than average, rather than moving to a dorm room, and therefore relatively use this path a lot. For years, they tried to keep the green meadow between TU/e and the station intact. Even barbed wire could not prevent students from walking over the grass instead of over the sidewalk from the station to the TU buildings. Therefore, it was decided to harden the path and make the unofficial name official. And that’s what more landscape architects should do: build a large lawn and watch where the groups of pedestrians form a path over time that gives the ideal connection between two or more points. And then pave afterwards.

It turns out I’m by far not the only fan. A while back, a book and a short documentary about it were published, thanks to Jan-Dirk van den Burg, supported by, amongst others, Maarten ‘t Hart. The website olifantenpaadjes.nl is definitely worth visiting.

In the navigation industry I have had many similar discussions with governments.  Where traffic planners tried to tempt people to take the route they wanted, with a signpost, or by means of a prescribed color pallet on paper maps, that signpost and road map house collapsed when navigation systems were introduced on a large scale. According to science, the consistent self-organizing distributed system would, by definition, crash into a chaos. This has not been the case. Indeed, it has now been shown that the introduction of navigation has led to a much better and safer traffic system. But the road administrator’s illusion that people will follow the planned paths is history. When you drive through Liège, Lille or Lyon, you see an example of this: all three cities have built highways all around the city the past decades. But the navigation systems that continue to indicate the faster desire lane across the city wasn’t taken into account. Unless a proper delay occurs, even then the desired longer route is often not recommended because it still takes longer travel time than the route straight through the city.

I have mentioned it before: because society just can not be fully regulated, it is almost a prerequisite that we seek the desire lanes in laws and rules to keep society workable. For the standard work we will have robots and computers; we can concentrate on our unique ability to color outside the lines. That’s something we can not allow robots to do, knowing that they’ll once be a few thousand times smarter and stronger than us.

So if you come across a desire lane: take a shortcut. It makes you human.

One response to “Tomorrow is good: Desire lanes”