Every country is undergoing the corona crisis in its own way. To the Spanish, it’s war. From the beginning of the corona crisis, the Spanish population are addressed almost daily by the Chief of the Defense Staff. From behind a pulpit, this Miguel Ángel Villarroya outlines in grandiose words how the battle against the coronavirus must be fought. Then he sketches the battlefield where the civilians are, in his eyes, the brave soldiers. If they carry out the orders of the government of social-democrat Pedro Sánchez, everything will turn out fine. Top-down, then. And not especially innovative.

Let’s call it ‘the Spanish approach’. This way of thinking is deeply rooted in the residents of a country that has only been a democracy since 1978. The fact that Spain has implemented the strictest regime in Europe – sports and hiking are still banned – has led to hardly any protest. Just like school students, citizens don’t get the chance to raise their hands and ask for explanations. After all, how could the virus spread so quickly in Madrid? Were soccer, parties, and demonstrations considered more important than immediately distancing themselves from the enemy? No answers will be given to those questions. Lockdown is a lockdown. And that means Basta! Efforts by critics who do raise questions here and there are seen as highly inappropriate. Most of the 47 million Spaniards are resigned to the measures.

Disregard for the strict rules

Of course, there are the rebellious Spaniards who are trying to flout the rules. ‘Because if you can get around something, you should at least try to,’ is the thinking behind this. Even former Prime Minister Mariano Rajoy turned out to be ignoring the cabinet’s strict rules in actual practice. His neighbors in Madrid recorded on camera how the former leader of the PP (People’s Party) made a tour of his neighborhood every morning in his running shoes. They passed the images on to the media. Ordinarily, this would lead to a fine of between €100 and €600. Like many politicians in his party, Rajoy most likely thinks that he is above the law. And in practice, he is.

‘All animals are equal’

Rajoy was not the only one. The far-left Deputy Prime Minister Pablo Iglesias was supposed to go into quarantine for a fortnight when his wife Irene Montero – who is incidentally also the Minister of Equality – had tested positive for the coronavirus. However, within a few days Iglesias was present at the meeting of the ministerial staff without a face mask. The Podemos leader successfully invoked his exceptional status as a politician. As if the risk of infection was somehow less for him. It was reminiscent of the famous sentence from the book ‘Animal Farm‘ that George Orwell wrote based on his observations of Stalinist communists during the Spanish Civil War (1936-1939). ‘All animals are equal, but some animals are more equal than others.’ 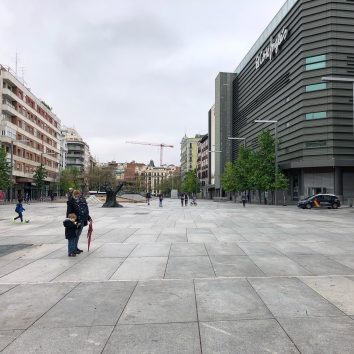 No end in sight yet

That the rules in Spain do indeed apply to mere mortals is proven by the figures from the Ministry of the Interior. More than 700,000 people received a fine in the past six weeks. That’s how ‘the army commando’ beat the deserting civilians. After all, in the battle against the unseen enemy, orders must be followed. In order to keep the muttering troops happy, children up to the age of fourteen are now allowed to go out for fresh air for an hour each day. And when a subsequent battle with the virus is won, adults will be permitted to exercise or go for walks.

However, there is still a long way to go before the end is in sight. And how Spain intends to win this war is an utter mystery. It’s possible that a new economic crisis will claim even more victims than the coronavirus.

No sacrifice too great

It is not in the nature of Spaniards to blame themselves. Now that the ‘war’ will claim many more dead and wounded than foreseen, Sánchez is trying to seek help from European allies, who are each in their own way trying to tackle the virus head-on. One of them does that more resolutely, another more leniently. Spain not only intervened with the most severe measures but also seems to be suffering the most damage. Doubly painful.

For the time being, Sánchez is hoping in vain for more economic solidarity from, among others, The Netherlands, where it is preferable to talk about “containment” of the virus in ‘wishy-washy terms’. But in Spain, it is war. “And in a war, you don’t set any conditions where help is concerned,” Sánchez said in the direction of Mark Rutte last Saturday. So, it seems that no sacrifice is too great for Spain in the fight against Covid-19, as long as someone else comes to the rescue.