For two weeks now, The Golden Lightbulb Challenge is on its way and a considerable stream of ideas has already been delivered at TU/e Innovation Lab. But of course, there is much more to come. The first round of this Eindhoven-based idea machine lasts until 23 November. For the eight winners, a cheque of 250 euros is offered. And that’s more than worth your energy, especially because it doesn’t take a lot of time to participate in this round. Those who join in rounds 2 and 3 can even earn up to 10,000 euros – but that will take some more effort.

Victor van der Linden, manager of organizational partner Fontys Centre for Entrepreneurship:
“The Golden Lightbulb is an ideal platform for people with fresh ideas, but who don’t yet know how to turn it into a success.”

Every good challenge needs a spark somewhere to be able to arise. The same goes for TU/e’s The Golden Lightbulb. The spark came directly from the American west coast. Steven van Huiden, one of the initiators: “Robert Al and I were thinking about a contest for ideas, when someone pointed out the challenge that has been organised for years at Stanford University. Oxford copied it at one point and in both places it has become a huge success. Thanks to enthusiastic sponsors, large cash prizes can be offered, making it even more popular year after year.”

Bright Move, the collaboration of TU/e, Fontys, Brainport Development and BOM Brabant Ventures, is the most important partner for The Golden Lightbulb. There’s a lot of logic in that choice because the Lightbulb is closely in line with Bright Move’s goals: to help innovative entrepreneurs in Southeast Brabant achieve their ambitions with money and good advice.

The low-threshold first round (Stanford calls “Win $100 with your 1-minute pitch“, and Eindhoven has changed that into “Win €250 with your idea on just a sheet of paper“) is now in full swing, followed by a second round where a little more substantiation of the plans is expected. In the third and final round, it must be clear which ideas can actually be converted into a company. “And the great thing is that you don’t necessarily have to win rounds 1 and 2 to take part in 3”, says co-organiser Loek Daemen. “It’s not a dropout-race, every round is open to everyone.” And ‘everyone’, that’s all the people that live or work in one of the 21 municipalities of Brainport Eindhoven.

“For this first edition, we had to work with a very short lead time. So this first year is also for us to see how everything is going to run. But step by step we will take this to a higher level, also with the help of parties like Bright Move and Braventure. So that we can generate real structural new business activity from this challenge for the region in the future.”

“This is where the new Lightyears should be born”

Everyone will recognize this: you have this great idea but you don’t know how to bring it one step further. How to execute your plan? Some people go looking for support in their direct environment, for others this is more difficult, for example, because their network is not sufficient. Van Huiden: “It is precisely for these people that the university naturally has a lot to offer, certainly because the threshold to participate in our contest is very low.” At least, in the first round, it is. “In that respect, we are a bit more serious, less non-committal than most other idea contests. In round 3, for example, we expect a pretty solid theoretical framework. Then it’s about the really serious ideas, here the new Lightyears will be born.”

For those who are worried that the university will steal their idea, Daemen has some reassurance: “The ownership of the idea, the intellectual property, always remains with the inventor. We don’t want shares in exchange for participation, as is often the case with accelerators. But that also means that it may be wise, when you participate in The Golden Lightbulb, to first consult with your employer. Even your employer can sometimes lay a claim to the ideas that an employee has come up with – at least if that happened in the context of that company.”

The nine best ideas will go to the final on 31 March. And after that? “Then our partners or other organisations in the region can take over the baton. Sometimes money is needed, sometimes an accelerator program can be useful. Both options are well represented within our Brainport region.”

Although the entries for round 1 still come in daily, Van Huiden and Daemen are already looking forward to the next steps. “We want to raise expectations per challenge. But also year after year. How beautiful would it be if people from this region in a few years’ time would automatically think about the Lightbulb if they have a good idea?”

When has The Golden Lightbulb succeeded as a project? Daemen: “In the long term if several successful companies have emerged that started here. But also: if this has gained a certain stature as a phenomenon in itself. That it is spoken about, and that the social benefits are visible. If we ever achieve that, I would certainly call it a success.” 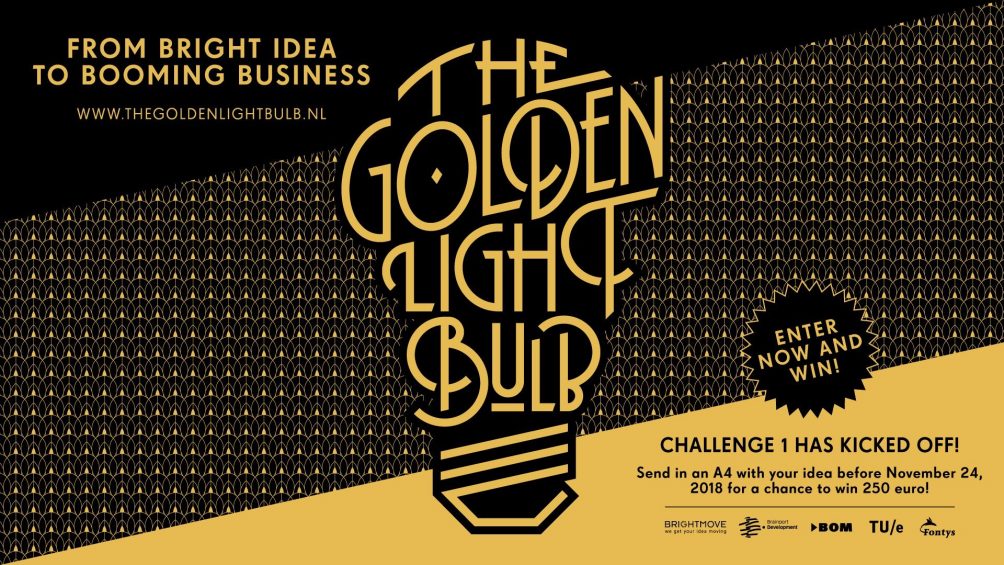 China 2022: Business under Dynamic Covid-zero Policy
From 100-day projects to long-term studies: Fontys ICT…
The Digital Shiftings in Sino-Dutch Business Communication
Choosing a stance? Interpreting the geopolitical challenge…
The circular transition needs input from technicians,…
The hybrid teacher: an added value for a business, students,…
Manage Cookie Consent
We use cookies to optimize our website and our service. Help us to make our site better by accepting all cookies.
Manage options Manage services Manage vendors Read more about these purposes
View preferences
{title} {title} {title}